Question: I sometimes hear of Catholic colleges and universities honoring individuals who challenge the teachings of the Church. What makes a university “Catholic”? Can such a designation be taken away?

Answer: The university system began during the Middle Ages when the Church and society were closely intertwined. As the Church founded universities, it placed great value on the advancement and imparting of all branches of human knowledge, not just theology. Since then, Catholic higher education has further developed, including in the U.S., where men and women religious founded many schools. Some of these institutions retain their religious heritage and profess to be Catholic today, while others no longer have a connection to the Church. The religious identity of Catholic colleges and universities continues to be discussed and debated.

THE IDEA OF A UNIVERSITY

In 1854, Pope Pius IX established the Catholic University of Ireland with the help of St. John Henry Newman. In the founding process,
Newman wrote The Idea of a University, a defense of Catholic education, in which he explains that the purpose of a university is to cultivate “a comprehensive view of truth in all its branches.” According to this view, a university is not a place for fragmented specialization (as we often see in education today) but for totality and unity. Such a grand project for universal truth will inevitably fail if left to our own powers, but Jesus has given us the Church to guide us into all truth (John 16:13). The ideal of a university, then, cannot be fulfilled without the Church for as Newman wrote, “The Church is necessary for [the university’s] integrity.”

FROM THE CHURCH’S HEART

In Ex Corde Ecclesiae, St. Pope John Paul II recognized that Catholic universities have a certain autonomy, but he stipulated that they must do so in cooperation with their local bishops in fidelity to the Church. Unfortunately, many Catholic universities do not share this vision. The inconsistency can be found in its policies and hiring, but also in bestowing honors at events (honorary degrees and commencement speakers, for example). While such honorees need not be Catholic, their life and work should be consistent with core Catholic values – since all actions of a Catholic university should embody its Catholic mission.

When a university chooses to act in disharmony with the Church and the issue cannot be resolved, Canon Law grants ecclesiastical authorities the right to remove a school’s Catholic designation (Canon 808). In 2003, for instance, Marist College in Poughkeepsie, NY, was determined to be a Catholic institution no longer. Such a decision is not easy and involves discussions among university leadership, the diocesan bishop and, potentially, the Holy See.

Catholic colleges and universities are encouraged to embrace the beautiful visions of St. John Henry Newman and St. Pope John Paul II, acknowledging that the Church advances education and never seeks to hinder it. It is its only true guarantor, for only in Christ and His Church do we find the fullness of truth.

Father Endres A Question of Faith appeared in the August Edition of The Catholic Telegraph Magazine. For your complimentary subscription, click here. 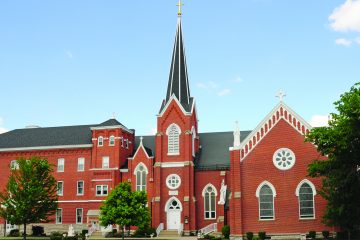