ST. FRANCIS DE SALES DEANERY — A new English translation of the Roman Missal to be launched in November is intended to restore to the liturgy the original language and understanding that was the foundation of the early church.

That was a key point Father Dennis McManus, theological advisor to Archbishop of New York Timothy M. Dolan, shared during the March 16 LeBlond Lecture at the Athenaeum of Ohio. Since 2001, Father McManus has also served as peritus to the Vox Clara commission of the Holy See and is now a consultor to the Congregation for Divine Worship and the Discipline of the Sacraments.

The plan for a new English translation of the Roman Missal began with Pope John Paul II, who recognized the inculturation — the Gospel being preached to a culture and the culture being transformed by the Gospel that it hears — was out of balance, Father McManus said. The pope’s concern was that there is not enough Gospel in the current translation and it is not quite the way culture should hear and express itself.

The new translation attempts to create a truer idea of inculturation, he said.

Pope John Paul II also wasn’t satisfied that the translation incorporated the divine mysteries, nor was he convinced the ancient forms of culture are connecting with modern people, Father McManus explained.

Pope John Paul II understood that inculturation is a two-fold process: the Gospel must be preached, and the host culture begins to react, deciding what it wants to hear and on its terms.

“Not every culture will hear the entire Gospel the first time it’s preached because many things in the Gospel will be unintelligible,” Father McManus said. “If the culture doesn’t have a corresponding term that the Gospel is asking it to hear or accept, it is going to be hard to get the culture to get in touch with or make a connection with the Gospel message.”

The new English translation of the Roman Missal will bring the Roman quality to the forefront of the liturgy, Father McManus explained. It will also add biblical allusion as clearly as possible in the texts, accuracy in the translation and more beauty in the language — elements that Pope Benedict XVI wished to incorporate.

“The translation you and I have had for about the last 35 or so years, I think we can say, is not actually a translation as much as it is a kind of paraphrase of many, many things in the Latin text of the liturgy,” Father McManus said. “This new translation abuts right up against that with a brand new approach.”

In reviewing the bulk of a prayer from the Second Sunday in Ordinary Time,  Father McManus noted there is no mention of Christ’s name except for an add-on at the end, no biblical allusion, no mention of mysteries of redemption, nor are there any figures from the Old or New Testament.

The prayer looks like what would have been used in a Roman pagan temple or civic setting, Father McManus explained, adding that a Roman and a Catholic could pray the same prayer, with the Catholic adding the traditional “through Christ our Lord” at the end.

“There’s a lot of pagan Roman prayer language in the Roman Missal that the earliest fathers of the church easily adapted to the Roman liturgy because it’s good, natural theology,” Father McManus explained. “There’s a lot of this straight out of Roman religion sitting in our Roman Missal and what the new translation is going to try to do is bring all this up to the surface by being more accurate and being much fuller in the way that it renders all these texts.”

Because Rome was an established culture, Romans could hear the Gospel of Jesus from sophisticated points of view when Sts. Peter and Paul brought it to them, Father McManus said. The Romans understood the sense of duty and love between God and Jesus.

“This religion…strikes a central Roman nerve unlike any other preaching has done,” Father McManus said. “This religion hits into the middle of the way Romans see themselves as Romans.”

Father McManus encouraged priests and diocesan liturgical committees to study the new translation and initiate a conversation with their bishop about what works and what doesn’t in order to get the best translation.

The information from the lecture will make clergy and lay ministers more aware of what’s gone on in the translation and the purpose of it. The lecture will also prompt them to ask themselves if the new translation helps them pray better, Father McManus said.

“That’s what it’s about. Pray more deeply, enter the mysteries better, sacrifice myself along with Christ, enter into the life of the Father,” Father McManus said. “If it does, bravo. If it doesn’t, let’s raise questions about where and see what we need to do.”

“Many of the prayers of the Mass have roots in Roman — or classical Western — culture,” he said. “By recapturing and refocusing on these roots, this corrected translation of the Missal has the potential to help our own adrift culture also find its roots.”

“The four concerns of Popes John Paul II and Benedict XVI for this translation should be kept in mind: inculturation, clear Biblical references, increased accuracy, and greater beauty,” he added. “I’m sure all parishes and parishioners can appreciate these ideas if they’re so invited.  And this is a dynamic reality; we all have a role in both embracing and going deeper into these prayers, then voicing how well the translation achieves these goals.  The ultimate standard for liturgical texts is, ‘How well is this helping us to pray?’ I’m excited that the new missal will help us pray even better, but it’s important to do honest reflection on this in the future.” 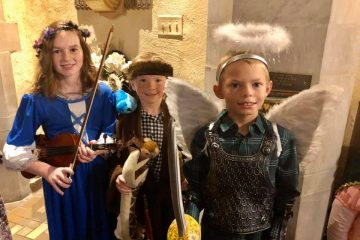