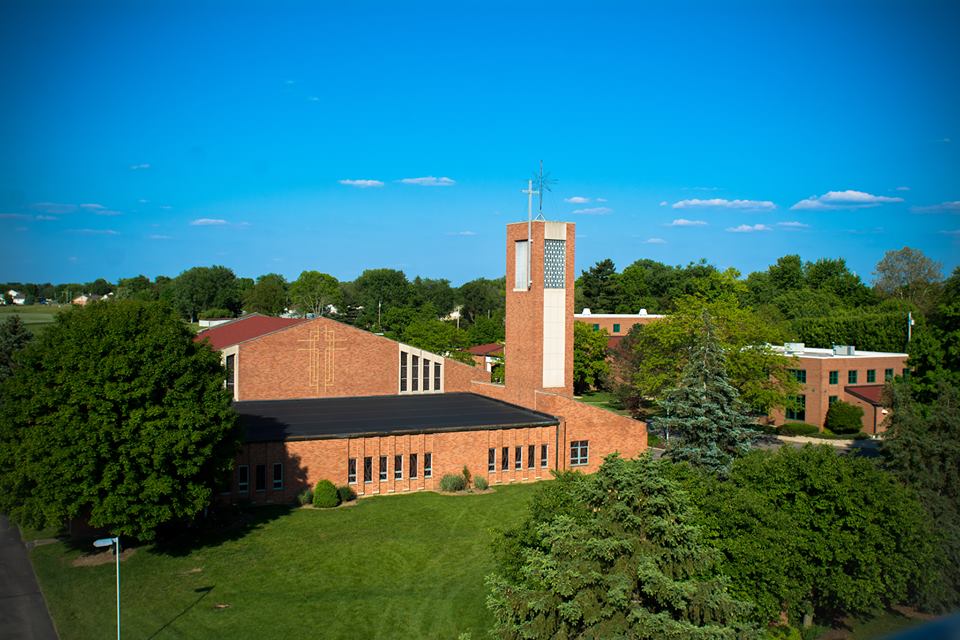 Just as the workday was winding down on April 3, 1974, an F-5 tornado that was part of what would later be called a super outbreak, touched ground 10 minutes southwest of Xenia.

Ten minutes later on that fateful day 40 years ago, the storm charged into the city of then-27,000 leaving millions of dollars in damage in its wake and 30 men, women and children dead, the lion’s share of the 36 killed in Ohio that day.

All told, there were 148 tornadoes that danced across 13 states that April 3 and 4, leaving 315 people dead, more than 6,000 injured, and 27,000 families suffered property losses. Greene County Memorial Hospital, while experiencing some damage, treated as many as 1,300 persons after the storm. Others were rushed to hospitals in Dayton.

While eight other churches were damaged in the massive storm, the storm seemed to take out its wrath most viciously on the 120-plus year old St. Brigid Catholic Church near downtown.

“Both the church and rectory were destroyed as was the original school next door,” recalled retired Ball State University Professor Charles R. Carroll of Xenia, who has compiled a history of the parish.

“The Sisters of Charity Convent was so badly damaged, it could not be repaired. It was located in an area now occupied by the Kmart parking lot,” Carroll said.

Carroll, who had graduated from St. Brigid High School in 1956, said the records of everyone who had ever attended that school, from back as early as the 1920s, disappeared in the storm.

Carroll praised the leadership of the then-pastor of St. Brigid, the late Father Robert Von Holle, and assistant pastor Father David Vincent. Both were in the rectory when the storm struck and escaped without injury. The April 12, 1974 edition of The Catholic Telegraph reported Father Vincent was preparing supper for the two priests when Father Holle saw a roof fly by. They took refuge in the basement before the twister hit the rectory. Carroll said the priests took turns sleeping in the basement of the ruined buildings in the wake of the storm to protect against looters.

Both priests were credited with saving the Eucharist and sacred vessels from the debris of the church. Carroll said one man in particular, the late Fred Norckauer, rescued a bell from the debris and that bell and others would eventually reside in the tower of the new St. Brigid, which was dedicated by Archbishop Joseph Bernardin Feb. 27, 1977.

Fifth through eighth graders at St. Brigid School were bussed into Dayton to a mothballed Catholic school in Dayton, St. Mary’s, Carroll said. (The Catholic Telegraph said the students attended classes at St. Luke’s in Beavercreek.) Masses were held for a time in the Knights of Columbus Hall in Old Town, north of the city on U.S. 68.

The new church joined a 1956 school building for the lower grades of the elementary school on Fairgrounds Road. For a time, Sunday Masses were said in the library of the school there, Carroll said.

Funerals for those killed in the storm were celebrated at the University of Dayton Chapel and even in a Xenia Methodist Church, The Catholic Telegraph reported.

Father Holle, who was dealing with an extended illness at the time, Carroll said, would bemoan the loss of about 200 parishioners who moved away from Xenia after the storm destroyed their homes.

Other tornados in the outbreak of April 3 grazed Our Lady of Visitation Parish in Western Hills, and when a storm destroyed a two-block area of Sayler Park, St. Aloysius-on-the-Ohio, unscathed, provided shelter for some victims. St. Jude Church in Bridgeton also escaped damage although half-dozen homes nearby were destroyed. St. Susanna in Mason sustained minor damage with a retail store next door was destroyed. But some 200 people took shelter in that church after the storm.

People should not fear difference, but division, pope says at audience