On Wednesday, August 4, the Sixth Circuit Court of Appeals, based in Cincinnati, will review challenges to laws upholding traditional marriage in four states — Ohio, Kentucky, Michigan and Tennessee. The court will review all the cases together.

A report by the Associated Press called Wednesday “one of the most important days yet in the wave of legal efforts around the country to overturn marriage bans.”

With such an important legal moment on the horizon, Archbishop of Cincinnati Dennis M. Schnurr released a statement urging prayer for the court, that it will act correctly to uphold traditional marriage.

“The law in our state was a constitutional amendment strongly supported by Ohio’s bishops in 2004, and for good reason,” Archbishop Schnurr wrote. “Traditional marriage, the union of one man and one woman for life, is the cradle of the family, which is the basic building block of society.”

Ohio Right to Life shared Archbishop Schnurr’s statement with their media release list along with an invitation to join others on Wednesday, from 12:30 p.m. to 2:30 p.m., outside the courthouse in prayer. The Potter Stewart Courthouse is located at 200 East Fifth Street, Cincinnati, Ohio 45202.

Below is the full text of Archbishop Schnurr’s statement and accompanying prayer.

“On August 6, the U.S. Sixth Circuit Court of Appeals in Cincinnati will be hearing arguments on efforts to strike down laws against “same-sex marriage” in four states, including Ohio. The law in our state was a constitutional amendment strongly supported by Ohio’s bishops in 2004, and for good reason. Traditional marriage, the union of one man and one woman for life, is the cradle of the family, which is the basic building block of society. And at the same time, as Pope Francis said last April: “The image of God is a married couple, man and woman, not only man, not only woman, but rather both. This is the image of God: love, God’s alliance with us is represented in the alliance between man and woman.” Please join me in praying that the federal appeals court will act wisely to uphold traditional marriage. One appropriate prayer would be the USCCB’s “Prayer in Defense of Marriage.”

Prayer in Defense of Marriage

God our Father, we give you thanks

for the gift of marriage: the bond of life and love,

and the font of the family.

The love of husband and wife enriches your Church with children,
fills the world with a multitude of spiritual fruitfulness and service,
and is the sign of the love of your Son, Jesus Christ, for his Church.

The grace of Jesus flowed forth at Cana at the
request of the Blessed Mother. May your Son,
through the intercession of Mary, pour out upon us
a new measure of the Gifts of the Holy Spirit
as we join with all people of good will
to promote and protect the unique beauty of marriage.

May your Holy Spirit enlighten our society
to treasure the heroic love of husband and wife,
and guide our leaders to sustain and protect
the singular place of mothers and fathers
in the lives of their children.

Father, we ask that our prayers
be joined to those of the Virgin Mary,
that your Word may transform our service
so as to safeguard the incomparable splendor of marriage.
We ask all these things through Christ our Lord,
Amen.

Saints Joachim and Anne, pray for us. 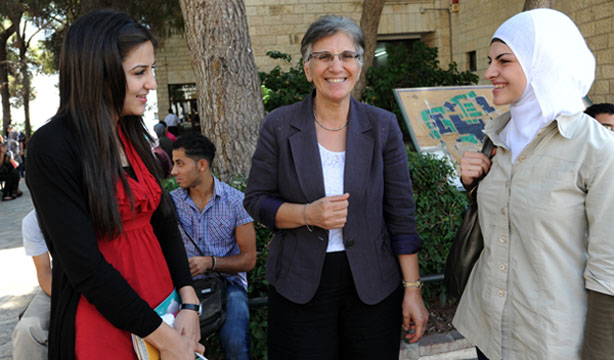