DAYTON DEANERY – Members of the Archdiocesan Pastoral Council (APC) heard a presentation on the implementation of the new Roman Missal and received an update on the visioning process undertaken by the Catholic Schools Office from Jim Rigg, director of educational services and archdiocesan superintendent of Catholic schools, during a meeting Sept. 17 at the University of Dayton.

The meeting began with the welcoming of new members Kelly Earhart of St. Mary Parish in Piqua; Michael W. Hall of St. Bernadette Parish in Amelia; Father William Stockelman, pastor of St. Bernadette; and Ronald Kienzle of St. Jerome, a mission church of Guardian Angels Parish in Mt. Washington. Also new to the council, but unable to be present for the meeting, are Marilyn Ross of St. Ann Parish in Williamsburg, and Peter Rebold of St. Boniface Parish in Northside. During an orientation session prior to the start of the meeting, Archbishop Dennis M. Schnurr and Auxiliary Bishop Joseph B. Binzer expressed their gratitude to the new members for their service.

Father Steve Walter, pastor of St. John Fisher Parish in Newtown, gave the presentation on the implementation of the new missal, set for the first Sunday of Advent, explaining to those gathered the history and reasoning behind the changes. Pope John Paul II issued Missale Romanum (the Latin text of the Roman Missal) to recognize the Jubilee Year in 2000, he said. This new edition included many new texts requiring translation. In addition, the experience of the years after the Second Vatican Council gave rise to a desire for more formal and literal translations of the original Latin texts.

The implementation of the new missal presents many opportunities for Catholics, Father Walter said, offering an invitation to be more attentive to the texts they have become accustomed to and the articulation of their faith, along with becoming more aware of the church’s liturgical tradition. The new missal will also provide more consistency across languages groups through the use of common texts, and “invite us into a sense of reverence and the mystery of our faith through the heightened language,” he said.

Father Walter noted that the archdiocesan Worship Office, assisted by the archdiocesan Worship Commission and Roman Missal Sub-Committee, and in collaboration with other diocesan offices, has been working hard to assist parishes with the various elements of formation for children, youth, adults, and the elderly and professional staffs. Priests of the archdiocese have also attended a series of workshops on introducing and proclaiming the new text, he said.

It will take patience and effort on “all our parts to appreciate the richness of the new text and its meaning,” Father Walter said, but ultimately “it will bring us into closer relationship with God.”

During the meeting’s afternoon session, Rigg provided the APC members with the current status on the visioning progress, which he had explained during a previous presentation in the spring. He made note of the seven key areas the vision and plan will address — academic excellence, Catholic identity and faith formation, finances, governance, marketing and enrollment, leadership and ongoing strategic planning, and said the “vision will provide a common road map for each of these areas that will also respect the individual culture and identity of each school.”

Rigg explained the series of visioning sessions that took place over the spring and summer and said the initial assessment report containing data from those sessions has been received. The report and an accompanying summary will first be made available to pastors and school principals, then to the general public via three presentations in Cincinnati, Dayton and the northern part of the archdiocese. These sessions will take place in October.

The next step in the visioning process, said Rigg, will be to form six task forces, covering all of the key areas except for strategic planning and comprised of six to eight members with expertise in those areas and representing the various stakeholders (pastors, principals, teachers, parents). Another round of visioning sessions dedicated to the task force areas will be held in the fall. The task forces will thoroughly analyze the collected data, identify trends and form conclusions, said Rigg, and these conclusions will inform the final report, which will be issued in the summer of 2012.

Rigg also made two requests of the APC members — to be pro-active and stay connected to the visioning process and to do their best in their respective parishes to encourage others to be involved and informed. “We all benefit from good Catholic schools,” he said.
The next APC meeting is scheduled for Nov. 19 at the Athenaeum of Ohio. n

Ministry at Birthright a blessing for those who serve there 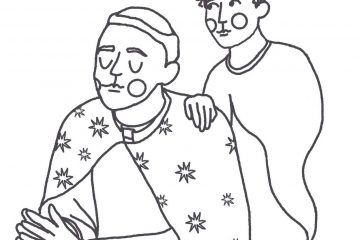