Board members and other volunteers of the Islamic Center of Greater Cincinnati toured the Cathedral of St. Peter in Chains Wednesday, April 15 with Archbishop Dennis M. Schnurr.

The visit was reciprocal, as Archbishop Schnurr had toured the Islamic Center in 2010.

Father James Bramlage, a former rector of the cathedral, served as the group’s tour guide. Also participating in the tour were members of the archdiocesan Social Action Office and the archdiocese representative to the Metropolitan Area Religious Coalition of Cincinnati Connie Widmer.

The tour began on the front steps where Father Bramlage explained some of the history of the cathedral and the archdiocese before progressing inside and hitting on most of the church’s key features, including the iconic mosaic along the wall behind the altar. Tourgoers also asked questions about the Catholic faith which Archbishop Schnurr and Father Bramlage answered.

After the tour, lunch was served and more conversation took place with Catholics and Muslims each learning more about their respective faith communities.

“After having visited the Islamic Center and learning more about the Muslim faith, this was an opportunity for us to share the richness of our Catholic faith and the history of the archdiocese,” Archbishop Schnurr said. “We appreciated the beautiful space of the cathedral but, more importantly, the chance to celebrate our belief in one, compassionate God and our commitment to the common good of the region.”

Dr. Inayat Malik, past President and Emeritus Board Chair of the Islamic Center of Greater Cincinnati presented Archbishop Schnurr with a framed copy of a document attributed to the Prophet Muhammad, granting protection to the monks of St. Catherine’s Monastery in Egypt.

“We certainly appreciate the opportunity to visit the beautiful cathedral, a jewel of the area, learn more about the Catholic faith and discuss issues of mutual interest,” Malik said. “As a member of the brotherhood of Abrahamic faiths, we, at the Islamic Center, greatly value our relationship with the archdiocese and are grateful for their support we have received as a minority. We look forward to furthering our collaboration in the future.”

“One of the neat things that emerged from our conversations is the shared histories we have,” he said. “Catholics were a minority community looked upon with a great deal of suspicion and questioned about our allegiance to the country. For a large majority of Muslims, I think they’re experiencing that same kind of historical cycle now.”

The Catechism of the Catholic Church addresses the Church’s relationship with Islam as follows.

“The plan of salvation also includes those who acknowledge the Creator, in the first place amongst whom are the Muslims; these profess to hold the faith of Abraham, and together with us they adore the one, merciful God, mankind’s judge on the last day.”

Homa Yavar, founding member of Muslim Mothers Against Violence and member of the Freedom Center’s Board of Directors was impressed with the cathedral’s size, but mostly with the preservation of history within.

“What you’ve restored here and the history you have kept here is really fascinating, especially the museum that you have,” she said. “I said to Dr. Malik that we need to do something about that to store history for the younger generations to come.”

Yavar added that since “we are all a creation of God,” it is important to have bridge-building events like the tour and lunch.

“There’s a code,” said said, referring to a passage from the Quran. “‘I have built you into nations and tribes that you may know one another.’ If God wanted, he could have had us all as one. It is very much as God’s plan that he has divided… We are all creations of God.”

Stieritz said the archdiocese and local Muslim community have long collaborated on pro-life and immigration issues. During the lunch, there was discussion of how the Islamic Center could potentially learn from Catholic Charities and the church’s well established aid delivery systems.

Throwback Thursday: Birth of a Papacy

Catholics ministering and meeting goals amid a pandemic 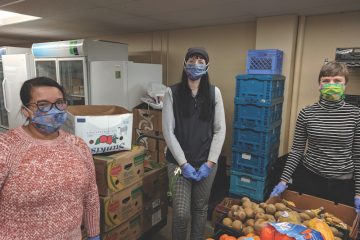