Our own Greg Hartman writes from Fatima, Portugal:

After nine days of traveling through Spain, Andorra, France, and back through Spain, the Archdiocese of Cincinnati pilgrims arrived in Fatima, Portugal.

One hundred years ago in this small village, the Blessed Virgin Mary appeared six times to three young children. At the time. World War I was consuming life and land, and Portugal was in political chaos. Refugees were pouring into Portugal from many other countries.

A century later, as the Archdiocese of Cincinnati pilgrims and thousands of other pilgrims from around the world came to Fatima, the world is faced with political upheaval, tragedies beyond comprehension, an uncertain future, and refugees fleeing their homes because of unspeakable violence, war and poverty.

But here. 100 years ago, in this simple agricultural region, the Blessed Mother appeared to Lucia, Francisco, and Jacinta in quiet and ordinary moments – much like the shepherds watching their flocks in Bethlehem or young Bernadette in Lourdes. Today’s pilgrims experience the amazing grace of peace at the Fatima candlelight vigil. As they do at Lourdes, pilgrims from all over the world bring their candles to be a part of this event: a part of peace; a part of faith, hope, and love.

Why does one make a pilgrimage, one may ask. Our piligrmis found that here, it is much like that first Pentecost: “Now there were dwelling in Jerusalem Jews, devout men from every nation under heaven. And at the sound the multitude came together, and they were bewildered, because each one heard them speaking in his own language.” (Acts 2:5-6)

At 9:30 p.m. the bells pealed and, no time wasted, the procession began. Candles were lit, hundreds gathered, some in small groups, and the overwhelming sense of peace descended on the massive plaza before the Basilica.

Wouldn’t it be wonderful if world leaders would sit in this plaza among thousands, and witness an incredible renewal of hope? They would see young and old; men, women, and children from all over praying for peace. Some process on their knees in the plaza, the length of several football fields.

It was a quiet night here, a holy night. While so many can’t understand the “culture of death” that Saint John Paul II has talked about; for this night it’s not here. Broken men and women stand in unison where all may not be calm, but where hearts are fortified in this amazing light of peace. As always, the pilgrims of the Archdiocese of Cincinnati have been praying for thousands back home, as requests for prayer have been pouring in. The pilgrims have been emboldened by the thousands of prayers at home being prayed for us. Soon, they will be leaving for their own homes: taking with them this amazing light, their conversion, and their newfound peace.

For many more photos and a running report on the pilgrimage, see our Facebook gallery page.

Pope: True Christians must remain hopeful, not 'whiny and angry' 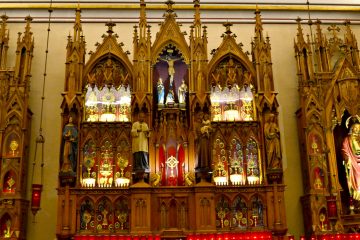