By Christine Rousselle Washington D.C., Jan 23, 2020 / 10:15 pm (CNA).- An estimated 10,000 pilgrims traveled from both near and far to attend Mass at the opening of the National Prayer Vigil for Life celebrated on Thursday, Jan. 23 at the Basilica of the National Shrine of the Immaculate Conception in Washington, D.C.

The pilgrims joined 46 deacons, 303 priests, 39 bishops, and three cardinals participating in the Mass, held the evening before the annual March for Life. The principal celebrant and homilist was Archbishop Joseph Naumann of Kansas City in Kansas, chairman of the US bishops’ pro-life committee, together with Archbishop Christophe Pierre, Apostolic Nuncio to the United States.

In his homily, Archbishop Naumann said he was cheered at the sight of so many young pilgrims for life, a powerful witness against an abortion culture, which he compared to an episode of ‘The Twilight Zone,’ in which “beautiful is ugly and hideous is gorgeous.”

The archbishop also spoke of his ad limina visit with Pope Francis. During his recent trip to Rome, said Naumann, he mentioned the controversy that erupted at the USCCB Fall General Assembly over whether abortion was the “preeminent” social issue of our time. Naumann said that the pope appeared confused at why this would be controversial, and re-affirmed that abortion is the most important social issue.

“The Pope is with you. He is praying for you. He supports you,” said Naumann. “My friends, the successor of Peter has our backs.”

Each of the pilgrims had their own reasons and motivations for why they found themselves in the Basilica on Thursday evening. CNA spoke to a few of them to find out their stories.

Jenna Perrey and Grace Fender are two first-time marchers. They traveled on a bus together for 22 hours with the Diocese of Jefferson City (MO).

“We hope to see all the crowds and see all the wonderful supporters of life,” Perrey told CNA. The Diocese of Jefferson City sent six busses to Washington for the March.

Fender told CNA she was looking forward to the experience of her first March, and to see everyone “marching together for the same cause.”

As in past years, attendees of the Vigil Mass and the March for Life are able to receive a plenary indulgence, provided they fulfill the other requirements of an indulgence of confession, total detachment from sin, and prayer for the Pope’s intention. This year, permission was granted relatively later than usual, but it was authorized on January 9 by Cardinal Marcus Piacenza of the Apostolic Penitentiary.

Other marchers told CNA they returned to Washington after being inspired by past marches.

“I went last year, and I felt like I actually made an impact,” Emma Galles, an 18-year-old pilgrim attending her second March for Life told CNA. Galles flew in from Iowa.

“You could see how many people were with you. It lets you know that you’re not alone in this fight and that you’re getting somewhere,” she said.

Galles told CNA that she is pro-life, because “Without the right to life, all other rights are pointless. That’s the number one right that every person should have.”

Carlos Rueda, a senior at Jesuit High School in Tampa, FL, flew up with some of his classmates to attend the March for Life. Rueda is the communications officer of his school’s pro-life club, and has attended the March for Life each year of high school. He told CNA that he is “passionate” about his involvement with the club.

Rueda said the March was “inspiring,” which is why he keeps coming back.

“You see so many people with the same goal in mind, even [from] different backgrounds,” said Rueda.

He said that in Tampa, he often faced pushback for his pro-life beliefs, but took solace in being surrounded by people who agreed with him in DC, “joining together, fighting for the same idea.”

Jayla Johnson, 15, and Tanina Sentementas, 16, had similar sentiments. The two traveled from Connecticut to Washington with their school, St. Paul Catholic High School.

Despite going to Catholic schools her entire life, Johnson said she was never taught about the reality of abortion until she was in the eighth grade.

“It really made me realize that it’s wrong, and I should stand up against it,” said Johnson.

Sentementas said that her group bonded during the eight-hour bus journey, and relished the chance to be with her peers and to better interact with them.

She told CNA that she is pro-life because she wants to “have a voice for children who don’t have them.”

One of the 39 bishops present, Bishop Richard Umbers, auxiliary bishop of the Archdiocese of Sydney, Australia, had by far the longest journey to Washington. Umbers attended the March for Life last year with a group of Australian students en route to World Youth Day in Panama.

The experience made such an impression that he returned in 2020, again with a group of students. He told CNA that the decriminalization of abortion in the Australian state of New South Wales in October last year inspired him to come back to help jump start the pro-life movement in his country.

“The Abortion Law Reform Act 2019 that was passed in the State of New South Wales on the 2nd of October is our own Roe v Wade,” Umbers told CNA.

“I’m bringing people to Washington with a view to promoting something similar in Sydney.”

Australia does not have any sort of annual March for Life demonstration. Umbers hopes to change that.

“At the Vigil Mass this evening, packed with youth and clergy, mention was made of its humble beginnings. A generation later it’s huge,” he said.

“In Sydney we have already amassed in our thousands outside Parliament. I believe that the Pro-Life cause, which is the preeminent issue of our day, deserves our very best efforts.”

‘Prayer has been the great source of strength to me’: Cardinal Pell looks forward to Easter 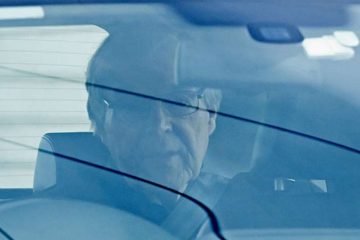