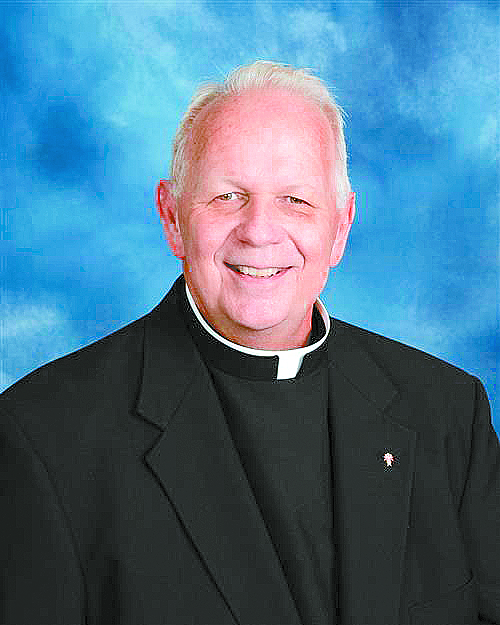 “Don’t call me in July,” Father Thomas Snodgrass said, sitting in his 8th floor office at the central archdiocesan offices in downtown Cincinnati. “I plan to be sitting poolside for a month just relaxing.”

Forty-two years after his ordination to the priesthood, Father Snodgrass is looking forward to a busy retirement saying Mass, hearing confessions, performing funerals and other pastoral tasks – “I have a lot of job offers helping parishes and I will continue helping the Little Sisters of the Poor,” he said.

Born Aug. 2, 1949, the son of the late Ralph and Colette (nee Porter) Snodgrass, he has had a varied background since ordination by the late Archbishop Joseph Bernardin in 1976. After some parish experience, Father Snodgrass joined the archdiocesan marriage tribunal and studied canon law at the Catholic University of America. Archbishop Emeritus Daniel Pilarczyk told him in 1983 that because he was educated by the archdiocese, he now owed three years of service to the tribunal. Three years turned into 35.

Father Snodgrass has served as a hospital chaplain, a pastor, an assistant pastor, a resident associate, and a Chancery assistant chancellor while serving in almost two dozen parishes across the archdiocese.

It’s been a long journey from his birth parish in Northside. His family (he has a brother and a sister) moved from Northside to Assumption Parish in Mount Healthy when he was in first grade. Here he had the first inklings of a vocation.

“I was in 5th grade and started thinking about it,” he said. “Being a guy, I played saying Mass and was influenced by our pastor, Father Francis J. Heider. I was fascinated reading a textbook on the Mass.”

He was not impressed, especially with the lines of small beds in the residence rooms of the seminary.

“So I sort of forgot about it through high school (La Salle, where he earned the Alter Award for the highest four-year grade point average in religion classes).

So, after graduating with a degree in theology, he entered, “‘The Rock,’ which is what we called Mount St. Mary’s Seminary of the West.”

Father Snodgrass said he is disappointed by how some lay people now view the church. “There’s not a lot of clarity that the church is a divine institution,” he explained. He said he’s also bothered by a lack of respect for the investment priests make in their education, and for their experience.

“Today, everybody’s an expert,” he said. “I like to think I know what I’m doing after 10 years of study and 40 years-plus experience.” He said young seminarians haven’t asked for guidance in tribunal and chancery matters, but he’d be glad to offer it.

But there are rewards. The greatest, he said, was as a judge in the Tribunal and as assistant to the chancellor, which gave him the chance “to help tens of thousands of people I have never met live the vocation of marriage.”

Father Snodgrass also takes pride in his homilies. For one funeral Mass, he said, “I heard someone mention that the deceased did not like broccoli. I closed the homily with a mention that while Al would be enjoying a seat at the heavenly banquet, he wouldn’t have to worry that broccoli would be on the menu. That got a laugh from the family, and I think it gave them some relief from the grief.”