WASHINGTON, DC—The Press Office of the Holy See made public this morning that the Bishop of Rome has accepted the resignation tendered by the Most Reverend Richard B. Higgins who celebrated his 75th birthday on February 22, 2019.

His Excellency, the Most Reverend Timothy P. Broglio, J.C.D., Archbishop for the Military Services, offered the following comment:

“On behalf of the faithful, clergy, and staff of the Archdiocese for the Military Services, USA (AMS), I thank Bishop Higgins for so many years of fruitful ministry in this portion of the vineyard of the Lord. He has served generously and capably so that the faithful of this global archdiocese and, especially, the Veterans might experience the presence of Jesus Christ and be drawn closer to Him in the sacraments.

“He has been an able counsellor and illustrated for more than a half century that priestly and episcopal ministry begins with Jesus Christ and meets the needs of others. The key is service before self.

“I have no doubt that he will continue to offer counsel, ministry, and encouragement to the Catholic community of the AMS and elsewhere. At the same time, I wish him a fruitful time of rest and a slower pace.”

Bishop Higgins’ retirement comes in compliance with Canon 401 §1 of the Code of Canon Law, which calls for bishops to submit their resignations to the pope upon reaching the age of 75. Today in Washington, Archbishop Christophe Pierre, Apostolic Nuncio to the United States, confirmed that Pope Francis had accepted Bishop Higgins’ resignation. Bishop Higgins will be succeeded by the Most Reverend Joseph L. Coffey, a retiring U.S. Navy chaplain who was ordained a bishop in March.

As AMS auxiliary bishop for the past 15 years, Bishop Higgins was primarily responsible for more than 200 Catholic chaplains in 153 VA Medical Centers throughout the United States, Puerto Rico and Guam. Bishop Higgins also served as the Bishop Protector for the eight-thousand members of the Catholic War Veterans of the United States. In his early years as bishop, he also alternated with the late Bishop Joseph W. Estabrook in assuring the pastoral care for what are now the Eastern and Western U.S. Vicariates and made regular pastoral visits to military installations in Europe and Asia.

Looking back on his service, Bishop Higgins said, “It was an extraordinary privilege to serve the men and women of the Military as both a chaplain and a bishop. It seems like yesterday when I drove onto Lowry Air Force Base and here it is 45 years later. It’s been a whirlwind, an incredible journey. I am grateful for the exceptional people the Lord has sent into my life, and I ask your continued prayers in the journey ahead.”

Bishop Higgins was born February 22, 1944, in Longford, Ireland. He is a graduate of the Pontifical Lateran University in Rome and was ordained a priest for the Diocese of Sacramento, CA, on March 9, 1968. Following parish assignments in Roseville and Grass Valley Bishop Higgins entered the United States Air Force in September 1974 and served as a Catholic chaplain until his retirement in the grade of colonel in October 2004.

Bishop Higgins was named a Prelate of Honor (Monsignor) in 1996. In April of 2004 he was named titular bishop of Casa Calanae and auxiliary bishop for the AMS by His Holiness Pope John Paul II. Then Archbishop Edwin F. O’Brien ordained him a bishop on July 3, 2004 in the Basilica of the National Shrine of the Immaculate Conception in Washington, DC.

Bishop Higgins is a Knight Commander of the Equestrian Order of the Holy Sepulchre of Jerusalem, holds an Airline Transport Pilot Certificate and several Flight Instructor Certificates. He is also a seasoned motorcyclist and rides a BMW R1100RT.

Bishop Higgins will retire to Nevada, where he served as a a chaplain at Nellis AFB in the 1990s.

USCCB chairmen elections: Who came out on top? 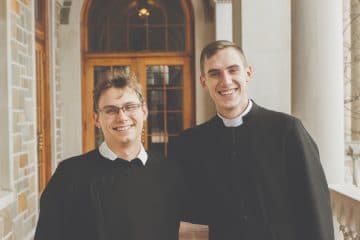