In a statement marking the 48th anniversary of Roe v. Wade— the Jan. 22, 1973 Supreme Court decision that legalized abortion throughout the U.S.—the new president and vice president said they were “committed” to codifying Roe in law, and to appointing pro-abortion federal judges.

“The Biden-Harris Administration is committed to codifying Roe v. Wade and appointing judges that respect foundational precedents like Roe,” their statement read.

“In the past four years, reproductive health, including the right to choose, has been under relentless and extreme attack,” Biden and Harris said.

Biden, who is Catholic, promised on the campaign trail that he would codify the 1973 ruling if elected as president.

The codification of Roe aims to ensure that, if the Supreme Court were to overturn the Roe ruling, federal law would still uphold legal abortion under the terms of Roe. The ruling had recognized legal abortion performed before the “viability” of the unborn child, but allowed states to ban abortions post-viability.

Biden has also supported taxpayer-funded abortion, most notably by calling to repeal the Hyde Amendment in 2019. That policy, enacted each year as a rider to budget bills, bars federal funding of abortions.

He has also promised to overturn other protections against taxpayer-funded abortions or abortion advocacy, such as by repealing the Mexico City Policy; that policy bars federal funding of foreign NGOs that perform or promote abortions as a method of family planning.

The rescinding or reinstatement of the policy is traditionally among the first actions a new president takes upon entering office. On Thursday, Dr. Anthony Fauci—White House chief medical advisor for COVID-19—told board members of the World Health Organization that the administration would be repealing the policy in the “coming days.”

As of Friday afternoon, Biden had not yet officially announced a repeal of the policy

While campaigning for president in 2020, Biden also said his health care plan would include abortion coverage, in subsidized health plans offered on a public option.

In addition, on Friday Biden and Harris both promised to work to “increase access to contraception.”

As vice president from 2009-2017, Biden presided over the Obama administration’s contraceptive mandate which ultimately brought the Little Sisters of the Poor and Catholic dioceses to court.

The mandate employers to provide coverage for contraceptives, sterilizations, and some drugs that cause early abortions in employee health plans.

Biden, as a presidential candidate, said that he would remove religious exemptions to the mandate that were granted by the Trump administration to the Little Sisters and others—thus possibly heralding future court battles with the sisters.

On the day of Biden’s inauguration as president, Archbishop Jose Gomez of Los Angeles—president of the U.S. bishops’ conference—said he was praying for Biden and noted areas of agreement and disagreement between the bishops and Biden.

“Catholic bishops are not partisan players in our nation’s politics,” he said in a statement. “We are pastors responsible for the souls of millions of Americans and we are advocates for the needs of all our neighbors.”

“For the nation’s bishops, the continued injustice of abortion remains the ‘preeminent priority’,” he said, adding that “preeminent does not mean ‘only’,” and there are a wide variety of challenges and threats to human dignity facing the country today.”

The U.S. bishops will engage with Biden with the aim of starting “a dialogue to address the complicated cultural and economic factors that are driving abortion and discouraging families,” Gomez said. 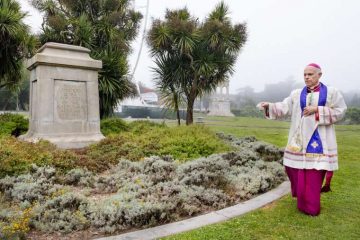