The conversation took place during the United States Conference of Catholic Bishops’ virtual fall general assembly Nov. 17. It was led by Archbishop Paul Coakley of Oklahoma City, chairman of the USCCB’s Committee on Domestic Justice and Human Development. After Coakley spoke, bishops were invited to share their experiences in five-minute segments.

Bishop Daniel Flores of Brownsville, Texas, praised the “great sacrifice” that has been made by his diocese’s priests, lay chaplains, and deacons to provide spiritual care during the pandemic, as well as the impressive volunteer effort by the laity to ensure that Mass can be safely celebrated.

Flores recalled telling Catholics they needed to disinfect churches after each Mass in order to have Mass at all. He said their response was the “most edifying” experience of the pandemic.

“The folks of the parish who volunteer–the youth groups, the apostolic movements, the different groups that are part of the life of the Church–it meant so much for them to have the Mass, and to have even a few moments of Eucharistic Adoration, even to this very day, after every single Eucharistic celebration, every funeral, every baptism, people step forward,” he said.

“This is a very powerful sign to us,” said Flores. “We are rightly focusing on a Eucharistic renewal as we move forth from this.”

The Brownsville bishop said that he thought the people who took the time to do things like disinfect their churches could be instructive for the bishops. Those people, said Flores, took on a difficult task, and accepted the added risk of exposing themselves to the virus “to make it possible for the life of the Church go on.”

“I’m just so grateful,” he said. “In the midst of Eucharistic absence, we could say, many people have stepped forward to make sure that we could experience, once again, the Eucharistic presence.”

He and his brother bishops, he said, should “reflect upon (this) for a long time to come.”

Flores said he saw Catholics kneeling outside the diocesan basilica, some crying, after churches were closed. Other bishops reported similar observations.

“This love for the Eucharist” has gotten people through hard times and crises in the past, said Flores, “and it’s what is going to ultimately sustain us in the future.”

Bishop James S. Wall of Gallup explained that his diocese is located in two states with a primarily Native American population. Churches on the reservations are still closed even, as the rest of the diocese has begun to reopen.

“There’s been a great need, a great desire and a hunger for the Eucharist there,” he said. The reservations, Wall explained, have a high rate of both infections and deaths from the coronavirus.

The poverty of the reservations complicates the situation, he said.

“For example, on the Navajo Reservation, 30% of the people do not have running water,” he said, and getting water requires a trip into town. This, coupled with weekend-long “lockdowns,” has made basic health practices like frequent handwashing “very difficult.”

Wall added that the pandemic has fostered a “greater love for the Eucharist” among his flock. He said this was the “one grace” that has come from this time.

“I think this absence of the Eucharist has really created a longing, a hunger, a desire on behalf of our people,” he said. He hopes he will soon be publishing a pastoral letter on the Eucharist.

Bishop Robert Barron, auxiliary bishop of Los Angeles, suggested a national campaign urging Catholics to bring someone with them when returning to Mass, as a means of evangelizing those who might fall away from the faith during the period in which churches have been closed.

Cardinal Sean O’Malley, archbishop of Boston, said his diocese had been hit particularly hard by both the virus and the restrictions that were placed upon churches.

In order to keep the sacraments available to those in most need, he formed a team of priests who would minister to covid patients.

These priests, said O’Malley, volunteered to go into the hospitals and were given specialized training and equipment to be as safe as possible. They also lived in isolation.

“Not one of the priests got sick during this time,” said O’Malley. “We’re certainly grateful for the generosity and it was a great consolation for the whole community to know that they have access to the sacraments at the end of their lives.”

O’Malley also praised his priests for their “valor in wanting to serve the sick and the dying.” 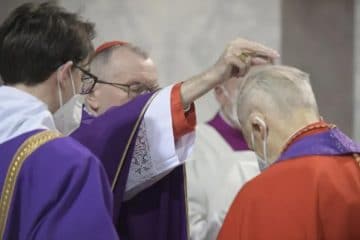