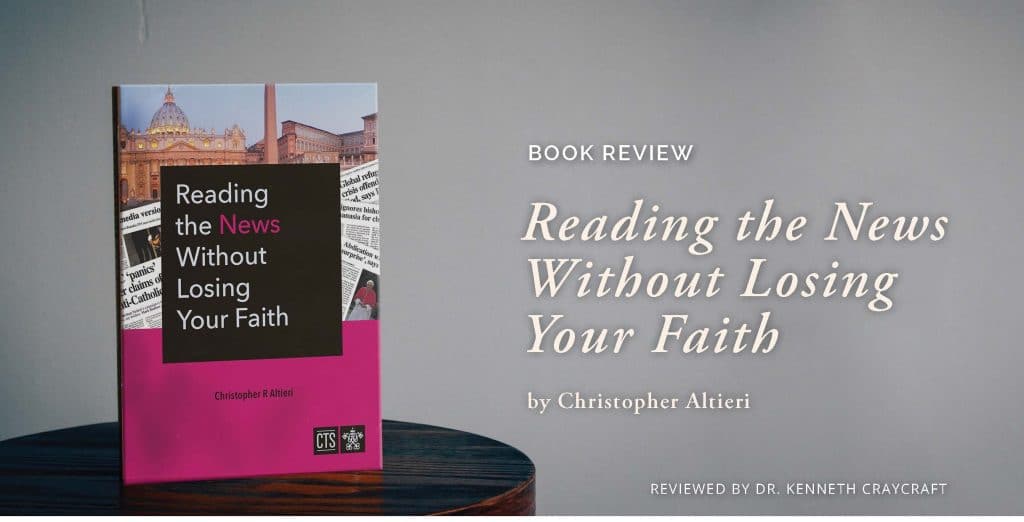 Evelyn Waugh’s 1938 novel, Scoop is the fictional account of accidental reporter William Boot, sent from England to cover a fictionalized version of the Italo-Abyssinian war. Based on his own experience of covering the actual war, Waugh’s novel is a satirical – even cynical – send- up on journalism’s practices, journalists’ characters, and the economic considerations that drive news coverage. Lord Copper of The Daily Beast, the editor who deployed Boot, was hopeful for “a very promising war” and wanted “to give it full publicity.” Neither reports of lost lives nor damage done were of any consequence, other than for their ability to increase The Daily Beast’s circulation. Nor was accuracy highly valued: Journalism was less about reporting news than competing for the most compelling scoop, and thus, selling copy.

I was reminded of Scoop by Christopher Altieri’s riveting new book, Reading the News Without Losing Your Faith. “The purpose of newspapers,” the saying goes, “is to sell advertisements.” In our internet and social media age, Altieri notes, “outrage” is a primary means of  selling those ads (or inducing those clicks). This is not simply a description of media and its methods for communicating, but rather a sign of our social environment’s general health. And this affects Altieri’s primary concern: news about and within the Church.

Among Altieri’s past  journalist  bona  fides  are  serving as a long-time worker on Vatican Radio’s English desk, a Rome correspondent for The Catholic Herald and a frequent contributor to Catholic World Report and other Catholic media outlets. From this experience, he gives an inside baseball account of how news happens, even when the reported news does not correspond with the events that gave rise to it.

The bad news is that Altieri confirms impulses observed by Waugh and exaggerated in Scoop. Reading the news is an inexact art because those delivering it are often driven by considerations other than factual accounts. The good news is that Altieri teaches us to develop a critical eye, suggesting helpful practices that assist us, as the title suggests, in reading the news without losing our faith. Examples he uses include, Humanae Vitae’s controversial development, Pope St. John Paul II’s skillful (but imperfect) use of media, and the (sometimes) sketchy coverage of Pope Francis’ (sometimes) difficult off-the- cuff comments.

Reading the News Without Losing Your Faith is not an exercise in hand-wringing, however. The author both exposes the malady and proposes the remedy, reminding us that, because we are not saved by the news, neither should we despair over it. We must remember that our hope lies elsewhere, and thus Altieri closes on this hopeful but realistic note:

“The world is fallen. We await fullness of its redemption. We have good days and bad – and there have been some big wins along the way – but the only true and lasting victory belongs to Christ, Our Lord, who conquered sin and death. Most of what we do is muddling . . . and that’s all the more reason to be about it.”

Time, Contingency and the Illusion of Control