Franciscan Brother Casey Cole OFM led a two-night parish mission at St. Monica-St. George about where God is calling you. On Tuesday, July 10, the CT crew went to Brother Casey’s talk on “What Happens After Saying Yes to God.”

Brother Casey talked about the” in-between time” – the time after we say yes to God and before we die. The first part of his talk was about how the initial fervor wanes: how the excitement we felt at the beginning fades and turns into maintenance. He likened this to the excitement of a road trip, or a new job, or a new workout, or a first date. The endorphins kick in. On a road trip everything is new and the beauty of the travel is captivating. However, by day eight the excitement fades, you get tired of listening to the same songs, you smell like fast food.

This can happen in prayer life, he said. At first, and especially when you’re close to God, prayer is easy: you feel that closeness, that excitement. Brother Casey explained how prayer can wane and it becomes mundane. If we build our prayer life on emotion, we’re going to die by emotion, and when we lose a healthy foundation then doubts creep in. He talked about looking for surety and how that will never happen. Yet doubt can draw us closer. Think about the “Titanic: It was said that they had no doubts; they were overly confident and they didn’t think they could make a mistake. To combat the dryness, make a commitment to pray every day, not when you feel like praying.

The second half addressed the in-between period. Brother Casey talked about how easy it is to hear the Word, that we like the thoughts of sacrifice, letting go – letting God, love one another. Yet in the real world of everyday life, that becomes difficult. He learned by his father’s sacrifice. His parents told him in high school they didn’t have the funds to help pay for college, so he would have to take out loans. But before he went off to college, Brother Casey’s father found a job at the university he was attending. It wasn’t his father’s dream job and he had to commute 70 miles a day, nonetheless God provided a solution.

Four years later, Brother Casey’s father called to tell him the university was letting him go. When Brother Casey said he was sorry, his father told him the job had been a blessing: that there was a need his family couldn’t provide for and God provided it. Now that the need is gone, he said, and God took it away.

Brother Casey went on to discuss that the frustrations we experience and how this becomes the proverbial complaint, “this isn’t what I signed up for. “ He shared that living as a friar can be amazing and yet unbelievably frustrating: dealing with someone’s putting empty cartons in the refrigerator, leaving silverware out, and other annoyances were not what he signed up for when he joined a community of love and faith! It’s easy to enjoy the highs, but often what we’re faced with the reality that this isn’t what we signed up for as Catholics.

This can have a good side, too. For example, Brother Casey said he once had very strong opinions on blogs and bloggers, even calling blogs “graffiti with punctuation” – and now he hosts a blog site. It’s not what he signed up for, but the Lord took him there. We all sign up for not only the joys and highs, but also the struggles. And in the unexpected we can become closer to God.

Brother Casey finished the evening discussing working hard for Christ. We can think, “If I study hard enough and if I work hard enough, I can accomplish everything.” There is some truth to that, but we will also experience weakness even when we work and study. Brother Casey said he was asked to do the homily on Good Friday, a huge honor for him. While he was preparing a migraine headache struck. He took a nap, took some medicine, and thought he was ready. In front of a huge congregation, he became confused, struggled with the words, had to start over and then he turned to the priest and told him he couldn’t do this. He went into the sacristy and collapsed on the floor in tears. It felt worse, he said, as people immediately came back to check on him. But the next day the pastor sent him a message that what happened sent a powerful witness: Parishioners saw that someone was weak and needed help and they witnessed that something could be redeemed out of failure.

Brother Casey wrapped up his mission talk by comparing this to the whole process of aging: No matter how hard you work, you will experience loss. Embracing weakness isn’t what we signed up for, but weakness is part of the journey. This life isn’t everything, it’s a pilgrimage and we are on a journey home. The world doesn’t need us, he said: It needs Jesus Christ, someone who is strong and merciful, and who is the way and the truth and the life. Our calling is to bring Jesus Christ into this world.

Brother Casey Cole is on a 9,000-mile road trip speaking to parishes throughout the United States. For more on Brother Casey’s talks, check out his YouTube page at https://www.youtube.com/channel/UCDcdVPVsJRxAVKq4vY0NYeg

Brother Casey Cole’s recent video on his journey to Cincinnati 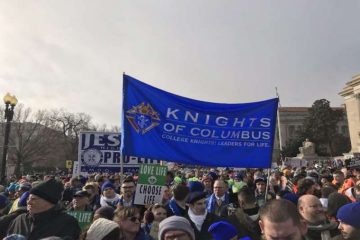