DAYTON – Calvary Cemetery Board President Harry Finke may soon be retiring, but he has more than left his mark on the place that has absorbed most of his attention for the past 51 years. He served as president for 46 of those years.

The Rock or just “Rock,” as he is known to family and close associates, has left a trail of civic involvement in the greater Dayton community.

From the Stewart Street Bridge Finke’s father built the first one and his son guided the reconstruction just a few years ago, to dams and lift stations in the Miami River Conservancy District, his civil engineering skills have been put to good use in Dayton, where he attended Chaminade High School and the University of Dayton. He completed his studies at Notre Dame.

As a civil engineer, Finke and his construction company led the development of Calvary’s roads, curbs and sewer systems as well as major building projects, including the cemetery’s office, Stations of the Cross Mausoleum and the Spirit of the Living Water cremation garden and columbarium.

Finke closed his construction company in 1983 and went to work for the Miami Conservancy District until fully retiring
in 1990.

But Calvary Cemetery may be his greatest legacy according to the people he has worked with there.  His vision, Superintendent Rick Meade says, saved one of the cemetery’s landmarks, the crucifixion altar and the Spirit of the Living Water cremation garden. In the latter, a triangular less than one acre piece of land with difficult slopes has been transformed into a feature that can house 1,300 internments.

Meade said the Stations of the Cross Mausoleum was created when he and Finke became convinced of a need for a community mausoleum.

Calvary Cemetery Association was created in 1872 and succeeded St. Henry’s Cemetery during a period of financial uncertainty. The facility resides on more than 200 acres on a glacial moraine above the Great Miami River on the Dayton-Kettering corporate limits. Of those 200 acres, 110 are developed with 30 of the developed acres available for burials.

This story originally appeared in the August 2014 print edition of The Catholic Telegraph.

Calvary to name part of cemetery after St. Kateri

Prayer to St. Michael the Archangel 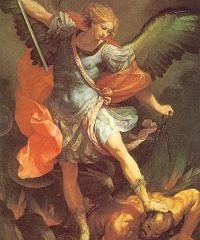