January 29, 2023 The Catholic Telegraph
Home»Commentary»Seize the Moment: OPEN YOUR HEART TO THE POSSIBILITY OF SAINTHOOD
Commentary

I recently made the decision to sell a series of books by Hans Urs von Balthasar. They had always been treasures of mine but, at 16 volumes, I knew I would never get around to reading them. It’s impossible to buy them as a set anymore, and their rarity tempted me to keep them, but a friend of mine is a devoted student of Balthasar’s work, and I knew that these books would be better off in his hands than on my shelf, collecting dust.

I expected him to be excited to receive my box of treasure, but his joyful response still caught me off guard. “You know what I’m doing, right?” he said. “I’m stocking up on those Nicholas Hardesty second-class relics!”

I laughed it off, but inside, his words rattled me. Second- class relics? These dusty things? My stuff? “Maybe someday,” I thought, and then I let that radical idea drift away. In fact, I didn’t think about it anymore until a few days ago, when I read about the recent beatification of Carlo Acutis.

THE SAINTLY MILLENNIAL FROM MILAN

Carlo Acutis was a Millennial who grew up in Milan, Italy. He loved the Eucharist from a very early age, and it panged him greatly whenever his friends would sin. He stood up for disabled kids whenever they were being bullied. He comforted and befriended classmates whose parents were going through a divorce. He once used all the money in his pocket to buy a sleeping bag for a homeless person. He went to Confession every week and Mass every day.

He died from leukemia on Oct.12, 2006. He was only 15, but in that short time he established himself as both a great person of faith and a teenager firmly rooted in his day and age. He loved the internet, video games and soccer. He created videos of himself with his dog and uploaded them to YouTube. He taught himself computer programming, and he created a website that cataloged Eucharistic miracles from all over the world.

As I read about his life and looked at photos of this teenager who looked like any other teenager, it dawned on me: His PlayStation is a second-class relic now. His computer keyboard, his soccer ball, his book bag for school – they’re all second-class relics now! His extraordinary life made his ordinary stuff not ordinary anymore. Now these things are sacramentals with the power to open your heart and predispose it to receive the grace of Jesus. That’s the power of a life well lived.

Now, as a I think and pray about this modern-day saint with his modern-day hobbies, my heart is opened to the possibility that sainthood doesn’t have to come “someday” for me. It can come here and now, in my own modern-day life.

Keep in mind, this dynamo was born in 1991! I was born before Carlo Acutis! If he were alive today, he would be 29. If he can be a saint – in the “Age of the Internet,” from the Millennial generation that we are all too quick to write off and declare hopeless – then certainly there’s hope for me. There’s hope for all of us.

Acutis once wrote in his journal (a second-class relic!): “Sadness is looking at oneself, happiness is looking at God. Conversion is nothing but a movement of the eyes.” Like Carlo Acutis, let’s set our eyes on Jesus, especially in the Eucharist. Let’s take our hobbies and turn them towards the good. Let’s love and defend those in need. Let’s fashion hearts repulsed by sin.

Carlo’s life is a challenge to us to seize the ordinary moments, encounters, conversations and, yes, even things, of our lives and make them extraordinary. I’m convinced now more than ever that’s something I can do. And if my friend is smart, he’ll hold on to those books. 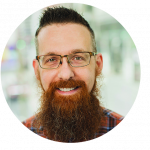 Nicholas Hardesty is the Associate Director of Adult Evangelization and RCIA for the Center for the New Evangelization, an archdiocesan initiative that empowers parishes and schools to equip the laity for missionary discipleship. [email protected].

Visit a Model of the Eucharistic Revival

A New Charisma for the New Year

How to Create a Sense of Community in Your Parish