More than 300 people attended a seminar on April 10 to learn how being a faithful Catholic and good citizen are related. 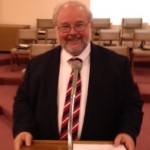 John Carr, the Director of the U.S. Conference of Catholic Bishops Department of Justice, Peace and Human Development, led a discussion with the members of the audience at the “Forming Consciences for Faithful Citizenship” presentation at St. Matthias the Apostle Church, in Forest Park.

“These are the faithful citizens we are talking about,” said Carr, referring to those in attendance at St. Matthias. “It was great.”

The presentation was especially timely given the fact that some experts believe the presidential election could come down to the results in Ohio this fall.

“No pressure,” Carr joked to the audience.

Carr outlined several detailed points of the “Forming Consciences for Faithful Citizenship” letter from U.S. Conference of Catholic Bishops (USCCB). In 2007, the full body of the USCCB issued the statement to guide Catholics in forming their own consciences for participation in political elections as well as for ongoing engagement in the public square.

The statement was re-released this past fall with an introductory note identifying some of the pressing issues of today: abortion, religious freedom and protection of conscience, marriage, the economic crisis and unemployment, comprehensive immigration reform, and violence throughout the world, especially in the Middle East.

Carr presented the teaching and its urgency for all Catholics — he also clarified and emphasized several details of the letter, including the conference urging Catholics to participate in political life — no matter what their party affiliation.

“Part of how we build that culture of life is to build that faithful citizenship,” Carr said during his opening remarks.

A self-described “church bureaucrat,” Carr injected a great deal of humor and plenty of personal anecdotes into his presentation, which seemed to really connect with those in attendance.

At one point, Carr mentioned how his grandmother wouldn’t attend his lecture simply because she once told the family not to talk religion and politics in polite company in public.

Carr, who is married with four children, mentioned how he grew up in a family that was active politically, including his mother’s affection for the Republican Party and his father being a pro-life Democrat.

Carr drew on his experience as a father to illustrate the difficulties of raising Christian children in a culture, which is contrary to many of the church’s teachings. Part of what faithful citizenship represents is aiding a child to give them an opportunity at a good life, Carr said.

Carr explained some misconceptions about the church in the political arena, saying those pundits who claim to know about the Catholic vote in a national election don’t understand how diverse Catholics are from the various backgrounds across the country.

“What brings us together is the word of God and His teachings,” Carr said. He emphasized that no Catholic should be on the sidelines in the political arena and added the bishops have encouraged Catholics to bring social justice issues to the forefront of the political dialogue.

“This kind of political responsibility is a requirement of our faith and our duty as citizens,” the bishops wrote in the letter.

Carr emphasized the mission of Catholics to stand up for social justice is integral, foundational and traditional with origins in the Old Testament. “It’s central to part of who we are, what we believe,” Carr said. “I would suggest when we take this faithful citizenship seriously…it helps us be more Christian disciples of Jesus…”

Carr said faithful citizenship shouldn’t be about the political clout of religious groups or undue influence from religious leaders in parishes either. He said the bishops encourage Catholics to integrate not isolate and continue to prayer and in worship in helping to build a faith community.

Joan Loebker, a member of St. Antoninus Parish in Covedale, sat in one of the first few rows listening to Carr. She said Carr articulated the church’s teachings. However, she still wants to want to see a more clear-cut guide from the church on how to vote overall.

Paul Hoeting, a parishioner at Good Shepherd in Montgomery, said he enjoyed the information Carr presented.

“I think it was a very, very good presentation,” Hoeting said. “He covered a lot of issues. …He seems to be well-versed in so many areas.”