Special to the Catholic Telegraph

More than 40 million people worldwide are refugees. Some are in camps, some are in transit and some have found new homes in communities ready and willing to accept them.

Each year, roughly 160 of those refugees are resettled in the Cincinnati area, courtesy of Catholic Charities Southwest Ohio (CCSWO).

On Saturday, CCSWO hosted their annual observation of World Refugee Day at Christ Lutheran Church on Compton Road in Colerain.

World Refugee Day was established by the United Nations in 2001.

More than 300 resettled refugees, volunteers and staff gathered for a day of celebration, calling to mind their new-found freedom, and a sense of solidarity with those still living under oppression, in camps or otherwise displaced.

“The Refugee Resettlement Program is one of our core programs at Catholic Charities,” CCSWO CEO Ted Bergh said. “Christ tells us that we are to welcome the stranger and help the most vulnerable, and there is a room full of individuals who were strangers and vulnerable and they’re here. Our ability to help them is really a blessing for the archdiocese.”

Catholic Charities operates under the United States Conference of Catholic Bishops (USCCB), in conjunction with nearly 200 other Catholic Charities branches. The agency handles 24 percent of all refugees coming into the United States. They work with the UN High Commissioner for Refugees, the Department of Homeland Security, the office of the Secretary of State and the Department of Health and Human Services.

Refugees take many paths, but families from Bhutan, Congo, Iraq and elsewhere shows up at Cincinnati/Northern Kentucky Airport with little more than the clothes on their back.

That’s where many of them will meet someone from Catholic Charities. They’re given at least a week’s worth of food,  home goods, a television, cookware, linens, clothes and more. CCSWO provides intense case management for refugees for between 60 to 180 days.

“Its very important for not only Cincinnati, but Catholic Cincinnati to realize the wonderful work the archdiocese has done through Catholic Charities over the last 30 years to help 12,000 people find new lives, freedom and safety,” Director of Resettlement Services Norm Solomon said. “Our greatest desire would be to have the opportunity to share this story with more of the parishes around Cincinnati.”

Those stories are plentiful, and moving. Between 70-80 percent of the refugees in the program are from Bhutan, 10 percent come from Iraq, and the rest come from all over.

Ghana Neopaney, 28, of Bhutan, has been in the U.S. since 2008 and now works for Catholic Charities.

Neopaney and his family fled ethnic cleansing in Bhutan to Nepal when he was six or seven years old, during the early 1990s, and he grew up in a Nepalese refugee camp.

“In 2008 I got an opportunity to come here, because there was no hope for us to go back to Bhutan,” Neopaney said. “We also celebrated in the camps. When I recall my past, I feel like naturally my tears will begin to roll down because it was a bitter past, but now we have something. We are in America and eventually we can be citizens of America.”

“I want to be thankful for them for giving us such great help when we arrive and hope for the future,” she said. “We are still having new families from Bhutan and other countries too. I hope they will have help for everybody.”

Blaze Kombila Harrison, 34, of Congo came to the U.S. on May 7th, with his niece and her son, fleeing war. They left Congo after the wars of 1999, settling in Gabon before emigrating.

“The root cause of our move from Congo was the war…, he said. “It was really very hard. We lost our parents. I saw how they killed my brother. Its very difficult to really explain that.”

Another Congolese, Nupcia Mbilampassi, 22, enjoyed the local World Refugee Day Celebration as a celebration of diversity.

““It’s good to bring people together because there is a diversity of culture and people have to learn things from one another,” she said.

Harrison and Mbilampassi spoke through an interpreter, William Hauyariman of Burundi.

More information on Catholic Charities SW Ohio can be found at www.catholiccharitiesswo.org. 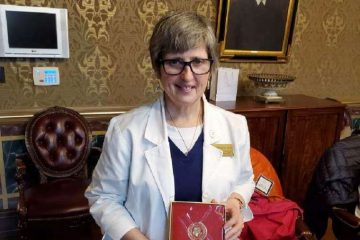