In describing her ministry to the Navajo people, Sister of the Blessed Sacrament Zoe Brenner simply says, “I’m just doing what God is calling me to do.”

But there is much more to it for the Reading, Ohio, native who entered religious life in 1966. Her community, founded by St. Katharine Drexel, focuses on serving primarily, but not exclusively, Native and African-American people. In 2002, after a stint as her community’s vocation director, Sister Zoe traveled Arizona to serve at St. Michael Indian School, established by St. Katharine a century earlier. For the past 10 years, she has been involved in pastoral ministry, primarily at Our Lady of the Blessed Sacrament in Ft. Defiance, and St. Bernard in Navajo, N.M., both in the Diocese of Gallup.

Life on the reservation can be difficult, she admitted. The people are poor and jobs are scarce. Their faith, however, is strong, as they strive to balance practicing Catholicism with following their traditional ways. “You just scratch the surface and their spirituality comes out,” Sister Zoe said. “We bless the Four Directions. They speak of the Great Spirit and are very aware of nature.”

The Navajo people have been especially hard hit by COVID-19, largely due to the lack of infrastructure that was an issue long before the pandemic. Many Navajo Nation residents lack the basic amenities, such as electricity and running water, that most Americans take for granted. As a result, “sheltering in place,” made it almost impossible for many to stay at home. In addition, a 2016 “Hunger Report,” by the Bread for the World Institute indicated that groceries, convenience stores and fresh product are hard to find or unaffordable for Navajo Nation residents, 44 percent of whom live below the poverty line.

Underfunded healthcare, lack of emergency and intensive care beds, and physicians have also contributed, along with the Navajo peoples’ high rate of diabetes and heart disease, both conditions which place individuals at higher risk for the virus. Another factor has been their beautiful and expansive view of family, which includes many generations living under one roof in often cramped conditions, and the clan system that brings together members of the Navajo Nation from far-reaching areas.

“Most of the people are very cautious, knowing they are more susceptible,” Sister Zoe said. “The further out you go on the reservation, the more people there are living together in the same house. Everyone is doing their best to encourage and pray for each other.

Her ministry has definitely been impacted by COVID-19.. As one way of keeping in contact early in the pandemic, the parishes offered drive through distribution of palms at the start of Holy Week and small gifts on Mothers and Fathers Days. Parishioners have also been able to phone in for weekly Gospel reflections from the local priests. Much of Sister Zoe’s time has been spent on phone ministry to stay connected, and she has been conducting children’s religious education online.

“We’ve been going further and further out on the reservations doing whatever we can to reach out to people,” she said. “I’ve been standing outside having conversations with people just to be with them. We’ve also been taking turns delivering boxes of food and supplies that have been donated, sometimes traveling 100 miles away.”

Sister Zoe recalls spending time with one family that lost their mother to COVID-19 and had buried her on the day of her visit. In situations like this, “It’s just been so important to be with the people, to let them know of our love and support, because we are family,” she emphasized. “It’s been hard, though, not to be able to physically touch them and offer them comfort.”

Amid the challenges, Sister Zoe says that her ministry and those she serves brings her great joy. ““They’re so open and caring. I feel very close to all of them. I get as much from them as they get from me. These are people of God.” 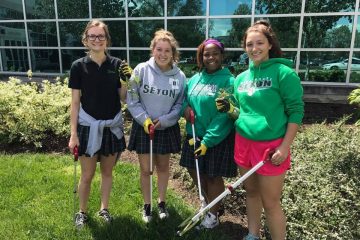