Per a Feb 4, 2021 decree from the USCCB, having been confirmed by the Holy See, the formula concluding all Collect prayers in the Roman Missal is changed effective Feb 17, 2021 (Ash Wednesday).

UNITED STATES CONFERENCE OF CATHOLIC BISHOPS
DECREE
In accord with the norms established by the Holy See, the following text is declared to be the definitive approved English translation of the General Instruction of the Roman Missal, no. 54, and is promulgated by authority of the United States Conference of Catholic Bishops:

54. Next the Priest calls upon the people to pray and everybody, together with the Priest, observes a brief silence so that they may become aware of being in God’s presence and may call to mind their intentions. Then the Priest pronounces the prayer usually called the “Collect” and through which the character of the celebration finds expression. By an ancient tradition of the Church, the Collect prayer is usually addressed to God the Father, through Christ, in the Holy Spirit,56 and is concluded with a Trinitarian ending, or longer ending, in the following manner:

The people, joining in this petition, make the prayer their own by means of the acclamation Amen.

A t Mass only a single Collect is ever said.

The revised text of the General Instruction of the Roman Missal, no. 54, was canonically approved by the United States Conference of Catholic Bishops on January 29, 2021, and was subsequently confirmed by the Apostolic See by a letter of the Congregation for Divine Worship and the Discipline of the Sacraments on February 3, 2021 (Prot. n. 228/20).

The above texts of the concluding formulas enter into use as of Ash Wednesday, February 17, 2021. From that date forward, no other English translation of these texts may be used in the dioceses of the United States of America.

Given at the General Secretariat of the United States Conference of Catholic Bishops, Washington, DC, on February 4, 2021. 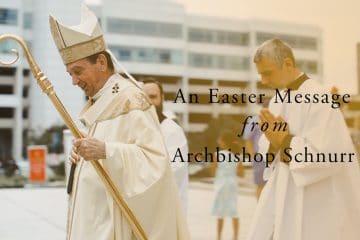