The pastoral and spiritual needs of Chatfield College’s diverse student population are as different as the school’s two locations — the peaceful, rural campus in St. Martin and the urban setting of the Findlay Market site.

Committed to meeting the students’ needs, Chatfield College recently formalized and expanded its campus ministry program with the start of the spring 2011 semester that began Jan. 17. A $10,000 grant from the Ar-Hale Family Foundation, along with other funding, has enabled the program to grow from one part-time campus minister to a staff of three individuals — Ursuline Sister Ruth Podesta, the Rev. Chuck Gray, a southern Baptist minister, and the Rev. Sam Talley, who is non-denominational.

“Chatfield has always been a prayerful place, a place of faith, but most of our student population isn’t Catholic,” acknowledged John Tafaro, president of the college, which was founded by the Ursuline Sisters of Brown County and is the only associate’s degree liberal arts college in southwest Ohio.

“We have both believers and non-believers here, and our students range in age from 17-70. People of all ages have challenges of faith, and if they want to seek a resolution, we now have a system in place to assist with that.”

Tafaro said the college worked with Jane Steinhauser, director of campus ministry for the Archdiocese of Cincinnati and campus minister at Sinclair Community College in Dayton, along with Ursuline Sister Patricia Homan, the community’s congregational minister, in developing Chatfield’s program.

The campus ministers, who will rotate between the college’s two campuses, each bring a familiarity with the school’s mission and unique perspective to their ministry. Sister Ruth has served in rural archdiocesan parishes in pastoral ministry and religious education and worked with Cincinnati’s African-American population at the Madisonville Education Assistance Center.

“I’m the Catholic presence, but we’re really ecumenical about this,” Sister Ruth said, noting she is particularly looking forward to working with Chatfield’s female students, who comprise approximately 78 percent of the school’s enrollment. “The unifying factor is that we all believe in God, and the great thing is that the students will have a well-rounded faith experience. I just love the idea of opening the door for them to a broader experience of the Catholic faith and possibly inquiring further about Catholicism. It’s a starting point.”

“I’m really looking forward to this,” she added. “I’m just beginning to mingle and make myself a part of things. It’s a great opportunity to meet the students and just let them know there is someone here to listen to them.”

Rev. Talley has been part of the Chatfield community for 10 years. Hehas taught classes in sociology, religion and psychology, among others, and is currently chairperson of the college’s human services department. In addition, he has served as the school’s unofficial, part-time campus minister.

In ministering to Chatfield’s diverse student population, Rev. Talley said, “the one thing we find overall is that the students need a lot of encouragement. Many of them are non-traditional and are returning to school after a long period of time. Change can be a scary thing. It’s wonderful to see them grow and accomplish something for themselves that they’ve wanted for a long time. That’s what makes this ministry so worthwhile.”

“In an urban setting, you have many people who would have been on the margins of society. They realize education is their way out. We try to encourage them along those lines, reassuring them that they can do this, that they are smart enough,” he added. “This really is a ministry of encouragement.”

Currently on sabbatical for the first time in 25 years as a pastor, Rev. Gray is enjoying the opportunity to reach out to students, while also serving as director of the college’s physical plant. He has been on staff at the Chatfield for four years.

“Our whole purpose is to empower the students in their faith and help them make the right choices concerning their education,” he said. “In most situations, we have the freedom to stop what we’re doing and talk with them.”

He believes the campus ministers’ own diverse backgrounds will lend themselves well to ministering to the students.

“It’s wonderful to have Sister Ruth on staff for the Catholic perspective. She can give pastoral guidance from that point of view. We also have both the men’s and women’s point of view,” he noted. “This will help students look at who God really is and give them a choice as to how they’re going to serve Him.”

The campus ministry team envisions their ministry expanding in the future to include regular spiritual programs and inspirational activities at both campuses. For now, their focus is on being present to the students, individual and group counseling, weekly Bible study and a 12-step program, modeled after that of Alcoholic’s Anonymous and focusing on whatever topics students need to address, including relationship, financial and mental health issues.

“Because our spirituality goes beyond the day-to-day life of the college, we’ll make referrals for any students that need additional services,” Tafaro said. “The campus ministry program is evolving, and it will exciting to watch how it grows.”

Formalizing its campus ministry program is just one way Chatfield is responding to recent increases in the college’s enrollment at both campuses. The school reports its highest enrolment in history for the spring 2011 semester. Official numbers show an enrollment gain of more than 15 percent from fall semester and doubled enrollment since last spring. The fall semester saw a more than 50 percent increase. Chatfield currently serves more than 400 students.

To accommodate the growth, the college added extra classes to the spring schedule, including a full day of courses offered on Saturdays. Chatfield also held recruitment fairs to attract additional faculty members to prepare for the increase.

Sister Eileen Connelly, OSU can be reached at: [email protected].

Quick Pics: Elder paints in the Holiday on the Hill Painting Contest 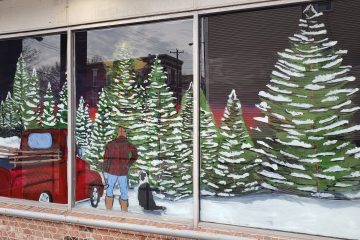