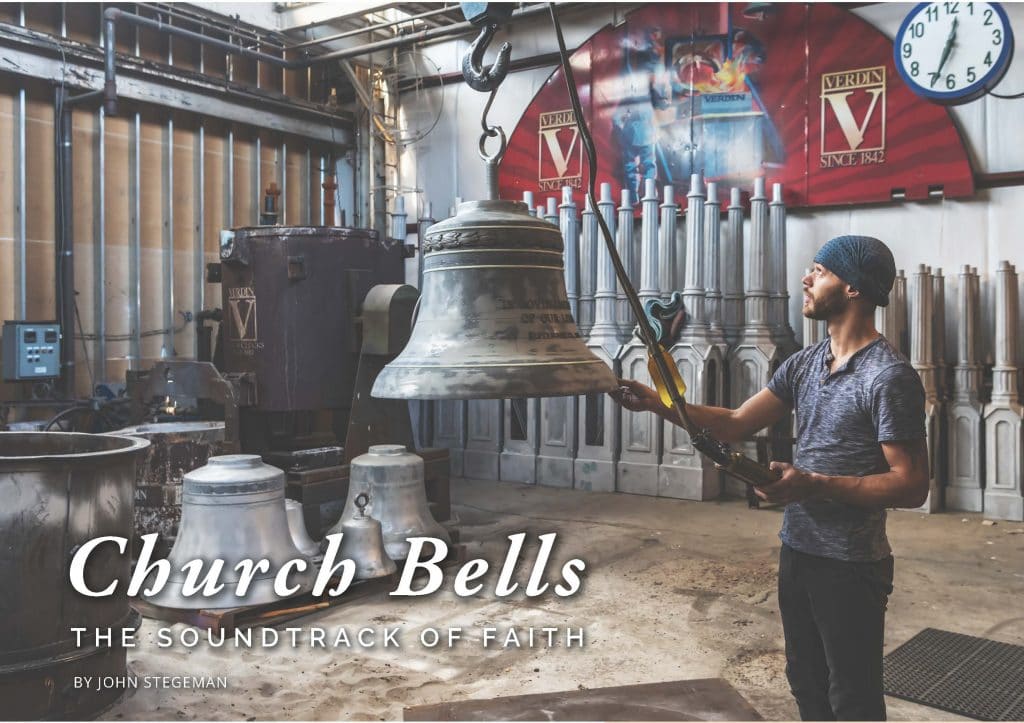 Perhaps the most subtle advertisement that a neighborhood has a faith community is the church bells ringing. It’s not in your face like a commercial or billboard, but the message is clear: We’re here and you’re welcome to join us.

If you’ve heard a church bell ring in greater Cincinnati during the last 175-plus years, there’s a good chance it was cast or serviced by The Verdin Company. Since installing Old St. Mary’s still-swinging bell in Over-the-Rhine to the present day, Verdin has been a leader in all things bells. Their legacy is one of note. To put its history in perspective, the company was founded just 21 years after the Archdiocese of Cincinnati was established.

Among The Verdin Company’s innovations are the electric clock winder invented in 1910 and the first electric bell ringer invented in 1927. It also claims the honors of creating the largest swinging cast bell in America and having the only traveling bell foundry in the world.

Speaking of history, the Catholic Church has been associated with bells to mark the hours and liturgical prayer schedules since the early 600s. After the Protestant Reformation, many non-Catholic churches continued the tradition. Today, bells are found across denominations, but there’s still a stronger market among Catholics. Bob Verdin, CEO of The Verdin Company, said that of the nearly 400 church bells they service in Greater Cincinnati, more than 60-percent are at Catholic churches.

The purpose of bells has changed over the years, but Verdin stands by their importance in communities. “Long ago the parishioners of Old St. Mary’s all lived all around the church in the neighborhood,” he said. “When the bells rang, people knew it was time for Mass… In the communities now, there’s a lot that the bells still tell. They still ring when someone passes away. They still ring when there’s a wedding. People do know what’s going on from them. Even if they live pretty far away, they can still hear the bells.”

During the Covid pandemic, bells took on another role: reminding people that the church was still there. Even though Mass was suspended, many ministries continued.

While bells may be most often associated with churches, that’s not the only place you’ll find them. The Verdin Company has worked on memorial bell carillons and bell towers in various outdoor spaces, like parks and cemeteries. Of particular note is the Deed’s Carillon in Dayton’s Carillon Historical Park. Other examples include a clock tower with a bell, honoring Veterans at Green Township’s Veterans Park and a carillon at Gate of Heaven Cemetery.

“Bells have been used as something to tell time, to tell people to pray or worship. Bells have been rung for the end of wars and celebrations of many things,” Verdin said. “It’s something that is everlasting. We work on bells cast in the 1600s. Many are from the early 1800s…. These bells are going to be here long after we are gone. They will be there and mark time for hundreds and hundreds of years.”

Perhaps the most famous bell associated with The Verdin Company is Big Joe, the largest swinging cast bell in the U.S. at the time. Cast by the VanDuzen Company, which Verdin took over in 1955, its diameter is wider than nine feet at the base. With all of its equipment, the bell weighs over 35,000 pounds.

Big Joe still hangs in the tower of St. Francis de Sales Catholic Church in East Walnut Hills, but it is stationary. The story goes that when it was installed and rung for the first time on Oct. 30, 1895, its vibrations broke windows within a one-block radius. While Verdin said that story is likely an urban legend, it is true that the forces on the bell tower were too strong for safe usage, and the bell never swung again.