Watching my father care for his father proved a chore for a pre-teen boy with his head full of kid thoughts and body full of kid energy.

They did not speak much on those days when we went to pick up laundry and tidy up grandpa’s tiny apartment over Frenchie’s Tavern. They didn’t tell each other stories or even talk sports. In fact, to mention sports brought a gruff, dismissive “Always the ballgame,” from grandpa. Dad was quiet to a fault. They often spent hours together, saying only a word here or there with the “Voice of St. Louis,” KMOX Radio, filling in the silence.

His older sister blamed that on their mother having died while they were very young. His brothers, both older, claimed it as because he was the most savvy of them all, even though he was the youngest. This was in sharp contrast to my mother, who would argue with a stop sign, as my southern-born son-in-law says.

As the archdiocese promotes its “Civilize It” campaign for this tumultuous election year, I can still hear mom’s defiant declaration on election days past, “I voted a straight Democrat ticket,” to which dad would reply, “I canceled your vote.” Then he would listen in silence to how seriously he had erred and how the nation faced a horrible fate because of people who voted like he did. “Do you think you’re Rockefeller?” she would ask. But if it was a fight she wanted, she wasn’t going to get it in that kitchen.

Learning to corral his mystifying knuckleball during one of our backyard games of catch – or chase, as was often the case – I finally asked Dad one day why he never argued. He answered without hesitation, “You cannot take back something you say in the heat of the moment,” he said. “Words that hurt are always remembered, even if they were not meant to hurt, and even if the other person used words to hurt you first.”

He went on to explain that the more responsible your station in life, like being the head of a family or being a public official, teacher or coach, for example, the more restraint a person needed to show in his or her choice of words.

He believed in discipline when it was deserved but his three sons never heard themselves called a disparaging name. Most of our foibles were met with a short, firm lecture followed by a wry smile. In fact, he went to our school and had a polite but tense visit with a teacher who called one of us “lummox” when we tripped up the stairs coming in from recess – no Mikhail Baryshnikovs in our family.

God created His universe with words; His Son taught us the path to salvation with words. We converse, sing, pray and reveal the richness or poverty of our hearts with our words. Words are important. A writing coach I know enjoins his students to use them like gold coins. They are an expression of our sharing of God’s image and likeness.

Passions run high during election years and candidates and politicians of all stripes develop increasingly sharpened skills at inciting our passions.

We live in cynical times that highly value rhetorical sparring, usually without a referee. It’s easy to scoff at the lofty goals of campaigns like “Civilize It.” But if we treat our words like gold coins, offered with care and generosity, we can share our opinions and perform the role of faithful citizen in this important election year.

This Editor’s Note column by Steve Trosley first appeared in the August 2016 print edition of The Catholic Telegraph.

Biden called 'counter-witness' to church teaching for presiding at wedding 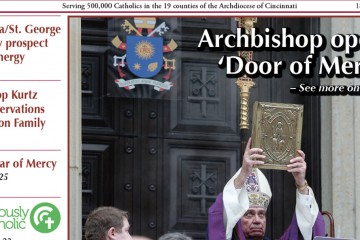