COVID-19 is waging war on humanity. Our individual responsibility to respond might cause some to recall a question from a young girl to her father in 1915, ironically, just before the 1918 Spanish Flu Pandemic.

“Daddy, what did YOU do in the Great War?” Twenty years from now, today’s young children will ask a similar question of us; how might we answer?

Our front line troops of nurses and doctors are battling fearlessly, but this hidden enemy is mounting its own covert operation, literally attempting to starve the most vulnerable members of
our population.

Feeding the Hungry
When the COVID-19 war stories are written, they will include many dramatic and heroic tales, but they should also identify the often-unsung heroes, like a former catering business owner named
Jeff Blumer.

As Director of Food Services for St. Vincent de Paul’s two homeless shelters in Dayton, Blumer serves nearly 1,200 meals a day. When the pandemic hit, nearly 100 of the shelter residents moved to hotels for social distancing. Overnight, Blumer’s team began delivering three meals a day to residents living in separate hotels across Dayton, while still continuing regular operations in the shelters. When asked how he does it, the no-nonsense former New Yorker simply responded, “We do it with a lot of planning and optimism; it just has to be done.”

There is also the Sheriff of Clark County, Deb Burchett, who posted a personal appeal on social media, asking residents to notify police if they identified anyone in need of food. The Deputy Sheriff, Wendy Donovan, said their Dispatch Center “soon received numerous calls from local residents.”

The department tried to respond out of their own pockets, but the problem was larger than anyone imagined. Sheriff Donovan reached out to Kris Horlacher at Food 4 the People, whose system
connects those with food to those in need.

Horlacher also coordinates direct delivery literally to the doorsteps of the most vulnerable, allowing people to stay home. Working with Horlacher, Dayton’s St. Vincent de Paul pantry and
Springfield’s House of Prayer Church, the police distributed food to more than 100 vulnerable families in a single day.

According to Horlacher, “People who know Jesus have locked arms to serve the poor, the lonely, the isolated and the hurting – in the middle of a pandemic. Jesus is our Leader – this is why we
cannot fail.”

Army of Young Volunteers
Finally, Tim Bete, executive director of the St. Mary’s Development Corp., which provides affordable housing in eight separate residences in the Dayton area, faced a significant problem. Some
elderly residents refused to go out for food, while others were happy to go out, even at the risk of exposure. Residents who contract the coronavirus could easily spread it to an entire facility, the largest of which houses about 250 people, most in their 80s.

In response, Bete coordinated with St. Vincent de Paul’s largest pantry, who reached back to Horlacher’s Food 4 the People. This team then enlisted the support of an army of at-home students
and young professionals. Together, they are boxing, loading, transporting and delivering food to the nearly 1,000 St. Mary’s residents.

Bete describes perhaps the greatest blessings coming from this pandemic. “Each organization has a different mission, but we are unified in faith and serving as God’s hands to those in need. It’s a blessing to see the Holy Spirit working. While the COVID-19 pandemic is awful, it’s an opportunity for the Church to play the role it was meant to play in the world: to be in solidarity with those in need and to love selflessly.”

Today's Video: 4 Essentials for Every Catholic 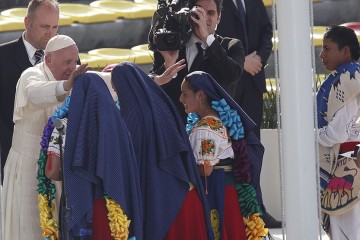