Denver, Colo., Apr 19, 2020 / 03:01 pm MT (CNA).- After receiving more than 1.6 million applications, a key part of the US government’s economic response to the coronavirus pandemic, known as the Paycheck Protection Program, ran out of money Thursday and will no longer be accepting new applications.

What is the PPP?

Congress passed the Coronavirus Aid, Relief, and Economic Security Act March 27 to help relieve the economy during the coronavirus pandemic.

Among various measures, including expansions to unemployment benefits, the CARES Act authorizes some $350 billion in loans to small businesses, intended to allow these businesses to continue to pay their employees. The loans were given on a first come, first serve basis.

The loans were capped at $10 million, were open to businesses with fewer than 500 employees per location, and were intended to cover two months of payroll costs.

The federal government promised to forgive the loans if a business used at least 75 percent of the funds to maintain its payroll at “pre-pandemic levels” for eight weeks after the loan is disbursed, the New York Times reports.

The remaining money could be used only to pay for certain expenses, such as a mortgage, rent, and utilities, according to the Times.

Those with criminal records left behind

The most recent guidelines from the Small Business Administration regarding the PPP stated that business owners will be denied a loan if they are facing criminal charges, or have had a felony conviction in the past five years.

This policy is, according to a group of nonprofit social justice organizations who wrote an April 10 letter to Congress, more restrictive than the SBA’s existing regulations regarding criminal record restrictions for small business loans.

Applicants are asked about criminal history for regular SBA loans. A typical small business loan application from the SBA allows applicants to provide details about their criminal history beyond a simple “yes” or “no”— unlike the emergency loan application, which explicitly states that the loan will not be approved if the applicant answers “yes” to either of the two questions pertaining to criminal records.

“With one in three Americans having some sort of record, and people with records experiencing an unemployment rate five times higher than the average rate, these restrictions will have a significant and detrimental impact on individuals, families, and communities across the United States,” the group of nonprofits said in their letter.

The application form for the PPP itself had more restrictions, such as mandating that no one owning 20% or more of the business be subject to any “means by which formal criminal charges are brought in any jurisdiction.”

A similar loan from the SBA called the Economic Injury Disaster Loan also asked for the applicant’s criminal history, and seems to exclude those who have “ever” been convicted, pleaded guilty, pleaded no contest, been placed on pretrial diversion, parole, or probation for “any criminal offense.”

James Blum, a Catholic who runs a community in Aurora, Colo., that assists men coming out of prison, told CNA that people with criminal records already face major challenges finding employment and getting loans.

Blum— who himself spent time in prison and has a felony on his record— considered applying for the PPP himself, but knew his felony would exclude him.

Many guys with criminal records hope, Blum said, that it would be easier to start their own company rather than try to get hired. The truth is, he said, most businesses, even if you’re not a felon, don’t succeed. There’s a lot of money that must be invested, and there’s an attitude of hustle that you have to have.

Reporting from the non-profit Marshall Project bears out Blum’s experience, suggesting that because people with felonies, in particular, often cannot get jobs, many start their own businesses.

Blum said he knows a man with a criminal record who started his own janitorial business, and found some success doing that until the company eventually went under.

Another man he knew started a company doing custom tile, and took on several employees, but “he’s working like a dog” to make ends meet.

“Many guys think, ‘Oh I’ll just work for myself.’ And that sounds good, but it’s very difficult to be successful as a small business owner in this country,” he said.

Blum’s organization, My Father’s House, helps men gain the skills they need to be successful post-prison. He said at least three of the men who frequent the house are currently out of work, one of whom was just released from prison and did not have a chance to look for a job before the pandemic began.

The other two, he said, have been laid off and are filing for unemployment.

At some point the parole officer will allow them to create an email address, but they can only access that email at the parole office, Blum said. The logistics are difficult, partly because they have to create a resume on a computer they’re not familiar with, and they can’t access their email every day.

When an employer finally gives someone with a criminal record a job interview, you can explain a felony as best you can, but it may not always make a difference, Blum said. The interview could be going well, and the interviewer could be impressed with the applicant’s knowledge and experience, but it may end up being moot once they learn of the applicant’s record.

“The answer is just: ‘Well, we’ll give you a call.’ And the call never comes,” Blum said.

Though a recruiter may interview a candidate with a criminal record, most Human Resources departments will step in after that. Success in the interview is not a predictor of success in getting the job, Blum said.

“There’s a whole series of decision makers that you never even get to meet,” he said.

“At some point you end up with a whole class of people that have served their sentence, they’ve supposedly paid their debt to society, and yet they cannot enter into the economy, and into society at a regular level.”

Blum noted that he himself is very blessed to be able to work full-time hours from home during the pandemic, and not be laid off, but “I’m in the minority, for sure, among felons.”

“How does that make any sense?”

Brian, a Catholic living in Denver who is working to start a software consulting business, told CNA that he tried to apply for the emergency loan, but a misdemeanor on his record automatically excluded him.

Brian is on a diversion program and has a misdemeanor harassment charge on his record. While he does not have a felony on his record, he has found it difficult to find employment since his misdemeanor charge, despite being an experienced computer programmer.

“Now I’m going to have to suffer financially for it, as if I haven’t suffered enough,” he told CNA.

While it may be politically expedient to include a clause excluding those with criminal records from the emergency loan program, Blum said it ends up hurting not only the bosses, but the workers as well.

“By stopping the business owner— who was convicted of a felony five, six, seven years ago and served his time and paid his debt to society— by stopping that man from getting the loan, you’re punishing another guy who’s never committed a crime in his life, and that guy’s family,” Blum said.

“[The worker] is going to lose his job because the business owner can’t afford to pay the payroll. How does that make any sense?”

If the purpose of the emergency loan program is to relieve the American economy, he said, he doesn’t see why a business owner’s criminal history is important. 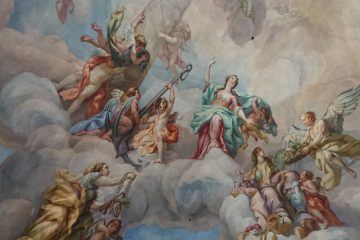