Denver, Colo., Mar 29, 2021 / 02:18 pm MT (CNA).- A funeral Mass was held Monday in Denver for Officer Eric Talley, a Catholic father of seven who was killed while responding to last week’s mass shooting at a grocery store in Boulder, CO.

“Eric has shown what is best about the service you give to our community, our cities, and to our country,” Archbishop Samuel Aquila said in remarks to the shoulder-to-shoulder packed congregation, many of whom were police officers.

“As police officers, I want to honor you, because too often you are taken for granted. And yet in situations like this, you are the ones who protect human life,” Aquila said.

The Mass was celebrated in the Extraordinary Form of the Roman Rite by Father Daniel Nolan, FSSP of Our Lady of Mount Carmel Parish in Littleton, Colorado.

In addition to a packed congregation at the Cathedral Basilica of the Immaculate Conception in downtown Denver, more than 1,400 people tuned into the livestream of the Mass. The Archdiocese of Denver covers nearby Boulder as well as much of northern Colorado.

Talley, 51, was reportedly first on the scene in response to a gunman opening fire at a King Soopers grocery store in Boulder on March 22. The gunman shot and killed Talley, along with nine other people.

Talley’s casket, wrapped in a black-and-gold shroud, sat in front of the altar in the basilica throughout the Mass.

Before the start of the Mass, officers in a line of police vehicles, including dozens of police motorcycles, had processed along Colfax Avenue to the cathedral to pay their respects.

Archbishop Aquila offered the “condolences of the entire Catholic community, for your husband, for your dad, and for your son.”

Talley gave his life to save others, Aquila said, and he quoted the words of Jesus: “No one has greater love than this, to lay down one’s life for one’s friends.”

Aquila said based on the testimonies of Talley’s fellow officers, “Eric lived that.”

“It is evident he was a man of God, one who put Christ first in his life,” Aquila said, offering prayers for the police officers in attendance.

Talley joined the Boulder police department in 2010 at age 40.

“May our Lord continue to comfort you…in the days ahead,” Aquila concluded, speaking to Talley’s family, which includes seven children ranging in age from seven to 20.

Father James Jackson, FSSP, pastor at Our Lady of Mount Carmel, said in his homily that the tragedy of the shooting in Boulder “broke God’s heart,” and told the congregation that Jesus bore the pain of the shooting at his crucifixion.

The priest read from a sermon on the Agony in the Garden by St. John Henry Newman, which reads in part: “[Suffering] is the long history of a world, and God alone can bear the load of it.”

Jackson said the purpose of a requiem Mass is to give God worship, and to thank God for the creation of the person who died.

“What a creation he was,” Jackson said, calling Talley “a faithful and heroic officer of the law.”

Nevertheless, Jackson said, Talley would not have wanted to be “canonized” at his funeral, preferring instead prayers for his soul and for his family, recognizing that Talley was a human being in need of God’s salvation.

He noted that Jesus’ redemptive suffering and resurrection on the cross was done for Eric, and for all: “Even for his enemies.”

Police have arrested 21-year-old Ahmad Al Aliwi Alissa in connection with the shooting. He is facing 10 counts of first-degree murder, Boulder Police said. Officials have not discussed a possible motive for the shooting, though his defense attorneys have requested he be assessed for mental illness.

A non-denominational memorial service is planned for Talley on Tuesday, March 30 at Flatirons Community Church in Lafayette, Colorado.

A GoFundMe page created to support Talley’s family has raised nearly $1 million as of Monday.

Live! The Chrism Mass from the Cathedral Basilica of St. Peter in Chains, 1:30 p.m. 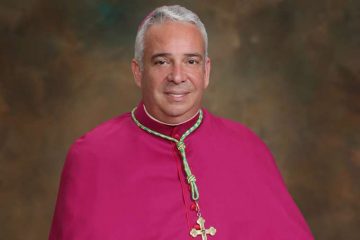