HAMILTON DEANERY — Megan Deaton feels she has been given many gifts in her life, including her faith. As a result, she feels a strong call to give back, to reach out to others. The 2004 graduate of Fenwick High School in Middletown has found that calling caring for Chinese orphans.

Deaton, who grew up in Holy Name Parish in Trenton, has been in Beijing for the past year volunteering at China Little Flower Mission. There Deaton and a small group of  other volunteers care for nearly 30 children at a time, many of them infants.

It was as a student at Franciscan University of Steubenville that Deaton began thinking about missionary work. She was initially drawn to the idea of serving in Haiti or Africa, then learned of China Little Flower’s work at a career fair during her junior year. The Catholic agency’s mission, in particular its commitment to “recognizing the beauty and dignity of each and every individual,” appealed to Deaton.

“I believe God placed it in my heart to do this. I don’t think I would do anything else,” she said.

Her grandparents, Donald and Gloria Dent, with whom Deaton had lived since age 16, weren’t surprised by the young woman’s decision. “She’s always wanted to do something to serve others. It’s all she’s ever talked about,” Gloria Dent said. “It comes from her deep faith.”

“She’s too far away,” Dent added, “but she absolutely loves what she’s doing and she’s happy. That’s the most important thing.”

Deaton is indeed happy with her ministry and shared its meaning for her, as well as her experiences with Chinese culture, with the senior religion classes at Fenwick when she was home in December.

The facility has a hospice unit that provides comfort and love to dying orphans. Deaton admitted that “while it’s difficult to watch the little ones suffer and die, we consider it a privilege to be able to care for these children and to fill their short lives with love and happiness.”

Premature babies, those who have low birth weight and abandoned infants with severe illnesses or birth defects, also receive the care they need, said Deaton. Each baby’s individual needs are considered, and treatment varies according to their diagnosis. “We provide specialized care until these babies are strong enough to join families of their own,” she explained.

The most rewarding part of her work, said Deaton, is the “kids’ smiles. It’s good to know we’re making a difference and that the babies are getting quality time and love.”

There are sometimes happy endings for the babies and children who are able to thrive and grow. Once healthy, they are able to move on to foster care. Saying good-bye has become easier for Deaton, but she still misses the little ones when they leave her care. “I get attached to them really easily. They’re all so beautiful,” she said.

She admitted that the death of each child hits her hard. Deaton is no stranger to loss; her brother, Zachory, was killed in a tragic accident in 1997, when he was just six years old. In tough times, she said, it is her faith that gets her through.

“My faith has always been there,” she said. “Even when my brother died, I didn’t know exactly why God was letting it happen, but I knew He was there and He was helping me. So, from that time, my faith has continued to grow to allow me to cope with the death of a little one or any other hardship that I may face. I am very blessed here to have the privilege of attending Mass every day, and I feel receiving the Eucharist, daily prayers and the prayers of everyone back home is how I make it through each day.”

What also helps is the enthusiasm with which Deaton has embraced the culture of her host country. She shares an apartment with six young Chinese women doing the same work, shops in the local market and has developed a “spicy-palate.” While she has not become fluent in Chinese, Deaton is able to understand enough to get by and has found that a smile frequently bridges the gap between cultures.

She describes the Chinese people as “friendly and curious. There’s a little old man in my apartment complex who always smiles and laughs when he sees me.”

Having completed her contractual one year of service at China Little Flower, Deaton is no longer required to volunteer for a specific time period. She plans on staying a least another year, saying, “I’m here until God tells me go somewhere else.” 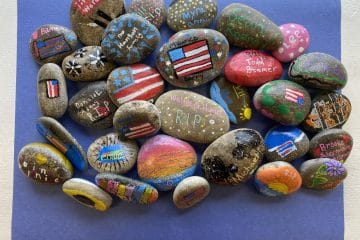