A new survey shows that Catholics are more likely to profess belief in guardian angels than belief in the Catholic doctrine of the Eucharist. The results are both a challenge and an opportunity to grow in faith, commentators say.

Seitz is secretary of the Opus Sanctorum Angelorum, an Ohio-based international Catholic movement that promotes devotion to the angels. It is directed by the priests of the Order of the Canons Regular of the Holy Cross.

His comments came in response to a new survey of Catholic voters that shows apparent inconsistencies in their approach to Catholic doctrine.

According to an EWTN News/RealClear Opinion Research poll released this week, almost 77% of Catholic voters believe in guardian angels, 8.7% do not, and 14.6% are not sure.

By contrast, only 50.3% of respondents say that they believe in the Catholic doctrine of the Real Presence of Jesus Christ in the Eucharist, namely that “the transformed bread and wine are the Body and Blood of Christ and not symbols.”

The poll, conducted by the Trafalgar Group from Sept. 12–19, surveyed 1,581 Catholic voters and claims an overall margin of error of 2.5%. The questionnaire was administered using a mix of six different methods, including live phone calls, text messages, and email. Survey partner EWTN News is the parent company of Catholic News Agency.

An opportunity to spread Eucharistic devotion

Self-professed Catholics’ inconsistent beliefs about the Eucharist have been the focus of many catechetical and devotional efforts.

The U.S. Conference of Catholic Bishops has launched a two-year National Eucharistic Revival to help Catholics “renew the Church by enkindling a living relationship with the Lord Jesus Christ in the Holy Eucharist,” the initiative’s website says. The revival hosts planned events to teach about the Eucharist and inspire Eucharistic devotion as part of Catholic life and mission.

Sister Alicia Torres, a Chicago-based Franciscan Sister of the Eucharist and executive team member for the National Eucharistic Revival, sees the poll results as an opportunity to engage Catholics.

“If there’s an openness to a relationship with one’s guardian angel, then that in and of itself, is an opportunity and an entry point where we might re-propose the relationship with Christ, and particularly his presence in the Eucharist,” she said.

Torres told CNA that she finds it “particularly hopeful” that the majority of Catholic respondents have “an awareness and acceptance of the supernatural.”

“I would be interested in that one-on-one conversation to get a better sense of what is the awareness of the supernatural for your average Catholic,” she added.

The Catechism of the Catholic Church affirms the reality of angels, Torres noted, and it says that the angels are present during the Eucharistic liturgy.

Though Catholics and other Christians don’t always believe in the doctrines of the Catholic Church, there is a “general interest” in angels, Seitz told CNA. Whether those who profess belief in angels mean the same thing that Catholicism does is a separate question.

“Our angels, as many Church fathers say, are prostrating before our Lord, who becomes present on the altar,” said Seitz. Although so many people speak about angels, he suggested, “it’s more difficult to believe in the Eucharist than to believe in angels.”

The world and the Church are “a little bit lost,” he said, because “we have lost a true, living contact with the holy angels.” Seitz said Catholic teaching on angels is summarized in the Catechism of the Catholic Church, but sometimes this is glossed over. Angels are rarely subjects of homilies.

“The angels are pure spirits. They are very powerful, with intellect and free will,” the priest explained. “They are personal beings. They are also created in the image and likeness of God. In the hierarchy of being, they are the highest of creatures, by nature, created by God.”

By divine plan, the angels are in charge of the government of the entire universe, from planets to plants, to rocks, to people, he said. It is in this context that individual people have a guardian angel.

“Every human being is destined to see God face to face,” said Seitz. “God, in his wisdom, assigned to each human a personal guardian angel as a companion, as a guide, leading us through life,” said the priest. “It is God’s plan for how to bring creation back to himself. The angels play a really big role in that.”

The angel at Fatima

Seitz cited the angelic and Marian apparitions at Fatima, Portugal, in the early 20th century, witnessed by three shepherd children who have since been canonized. The Catholic Church has taught that nothing about this apparition is inconsistent with the faith.

The Fatima apparitions include one of the few modern accounts of an angel encouraging devotion to the Eucharist.

In the fall of 1916, the children said, an angel made its third appearance. The children said an angelic visitor suspended the host and the chalice in the air, then bowed in adoration. The children imitated the angel, bowing their foreheads to the ground.

They learned from the angel a prayer of Eucharistic adoration and reparation that seeks the conversion of sinners. The angel gave the Blessed Sacrament to one girl, St. Lucia, and the Precious Blood to the two other children, Sts. Francisco and Jacinta.

“It’s a great instruction for us, regarding reverence before the Blessed Sacrament,” said Seitz.

Speaking more generally, he said that even the angels cannot fully understand the “profound condescension” of Jesus Christ’s incarnation and death on the Cross, and so too they cannot fully comprehend the mystery of the Eucharist.

“They can only prostrate themselves before this mystery and simply adore it,” said Seitz.

Other aspects of the Trafalgar survey of Catholic voters help give a snapshot of Catholic practice:

Mark Houck calls men to fight ‘noble battles.’ A controversial indictment is his biggest one yet 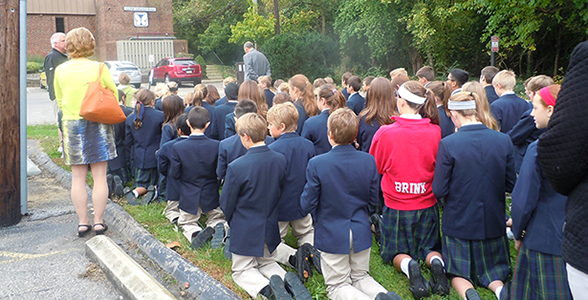