ST. FRANCIS DE SALES DEANERY — When Julie Peter is received into the Catholic Church at Holy Trinity Parish in Norwood at the Easter Vigil, her husband, John, and their three children, Lily, J.T. and Ryan, will be there to share in the joyous occasion.

Also there in spirit will be her late grandmother, Lillian Benjamin, a former member of the parish who brought Peter to Mass with her when she was a child.

“It will mean so much to her, even though I’m coming to it later in life,” Peter said.

Raised in Norwood, Peter’s parents chose not to have her and her siblings baptized in order to allow them to make their own choices about religion. She did have exposure to the Catholic faith through her father’s side of the family. Peter attended various churches over the years and says the experience was positive.

“It was a good thing,” she said. “It made me more open to other faith denominations and ultimately would strengthen my faith as a Catholic.”

Because of her family ties to Holy Trinity, Peter said she has always felt at home there. She has attended Mass regularly with her husband, a lifelong Catholic, and their children for years and said, “I’ve always felt comfortable in the Catholic Church. I love my husband, and it’s been important to him that I become Catholic. He’s very proud of my decision and has never pushed me.”

With her mother-in-law, Bonnie Peter as her sponsor, and under the guidance of Sister of Notre Dame de Namur Carol DeFiore, pastoral associate, Peter has found RCIA to be a meaningful process of self-discovery and an opportunity to grow in her faith.

“To me the Catholic Church is so mystical, especially for someone who isn’t Catholic,” Peter explained. “Sister Carol really broke everything down — the Mass and the sacraments — and made it more understandable and accessible. RCIA has helped me understand why Catholics believe what we do.

“You really learn a lot about yourself and your relationship with God during the RCIA sessions,” Peter added. “I’m better able to put my faith out there than before, and my relationship with God is more at the forefront of my mind now. I actively seek Him out now and know I can go to Him with anything.”

Sister Carol describes Peter as a “woman of deep faith. I recently told her how much I admire her,” she said. “Ever since she married John, Julie has attended Mass faithfully with him and their children. She has the kind of faith that does action. She’s already ministering in the parish and has helped with events without me asking.”

“Everything I do, I do wholeheartedly,” admitted Peter, who volunteers at her children’s school and coaches her son’s basketball team.

She has embraced her journey of faith with that same attitude.

“I’m looking forward to Easter Vigil. I’m nervous, of course, but very excited to officially become a part of things.”

New to the faith, a mother helps her family’s grow 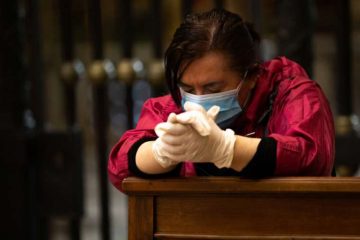