May 17, 2022 The Catholic Telegraph
Home»Local News»For Lou Winston the path from Judaism to Catholicism was ‘wondrous’
Local News

ST. LAWRENCE DEANERY — “Each of us is on a journey of faith,” said Lou Winston, when discussing his RCIA experience with The Catholic Telegraph. “I’m just starting at a different place than other people. That’s what makes it so wondrous. I experience something new every day.”

Winston, a software engineer for the Kroger Co. who was raised in Judaism, has been on a search for many years. He had found Jesus but was not quite sure where to find nourishment for this newly discovered faith. He began in the Catholic Church, but also looked into other religious denominations before finding his “spiritual home” at St. Martin of Tours Parish in Cheviot.

He was in his mid-20s when he first realized that “there was something that was missing from my birth religion; it just wasn’t satisfying,” Winston explained.

He met a young Catholic woman and celebrated Christmas with her family. “They were so welcoming to me, and it was such a joyful experience,” he recalled. “That put me on the journey.”

A next step came with marriage and birth of his first child. “I saw my little girl, who so innocent, trusting and helpless. I had always been pro-choice, but my belief in creation and God’s gift to us of children led me to turn pro-life,” Winston said.

His interest in Catholicism was also influenced by the strong Catholic presence on Cincinnati’s west side, where he has lived for nearly 40 years.

“I was moved by how my neighbors related to God and to their fellow man,” Winston said. “When my mother was sick, so many people said, ‘I’ll pray for her.’ You don’t hear that in many faith traditions.”

Winston and his wife eventually separated and divorced, which he describes as “a very painful time.” But faith questions continued, and although there are several Catholic churches in proximity to his home, he was drawn to the spirituality of the parishioners and the sense of welcoming extended to him at St. Martin. He worshipped regularly at the parish for two years before inquiring about the RCIA process.

His enthusiasm for Catholicism has grown each session the group has met since last August, whether they were learning about Catholic social teaching or the sacraments.

“I’m very impressed by Catholic social teaching,” Winston said. “It spells out our responsibilities and makes it clear that our faith isn’t a matter of entitlement and is more than a Sunday thing. It means we have to take of other people.”

“The spiritual nourishment that Catholics receive through the sacraments is so special,” he added. “Jesus gives us that through the Eucharist. It’s protection against sin. It makes all the difference in the world.”

His sponsor, Tom Gibson, has been especially helpful, noted Winston. “Our friendship has been a tremendous by-product of this journey. It’s been a blessing. I can ask him anything.”
Marti Barnes, pastoral associate at St. Martin, said she has been moved by Winston’s faith and commitment.

“Lou has demonstrated an amazing enthusiasm and passion for the faith,” she said. “He is hungry for knowledge, hungry for the Eucharist and hungry for a deep relationship with Jesus.”

As Easter Vigil approaches, Winston said, “I’m nervous, but looking forward to receiving the sacraments and starting my formal relationship with Jesus. I’ll be so happy that I’ve reached the Promised Land.”

His advice for others on the journey of faith toward Catholicism is to “make that inquiry. You’ll never go back,” he said. “It took me a long, long time. Don’t take as long as I did!”

A celebration of enduring love 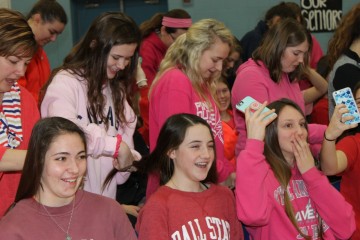