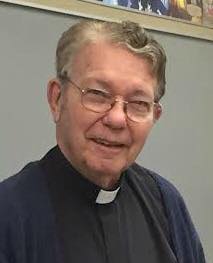 Reverend Donald G. McCarthy passed away on Friday, January 5, 2018. He was born on December 20, 1929 in Cincinnati, Ohio. He did his preparatory studies at St. Gregory Seminary and studied theology at Mount St. Mary’s Seminary of the West, Norwood. He was ordained on August 22, 1954, after his third year of theology, at Mt. St. Mary of the West Seminary Chapel, Norwood by Archbishop Karl J. Alter. He returned to the Seminary after ordination for his final year of theology.

Father McCarthy received his first assignment on June 16, 1955 as Assistant at St. William Parish, Cincinnati and to teach at Elder High School, Cincinnati.

On June 14, 1957, he was appointed Assistant pro tem at St. Jerome, California (Cincinnati). That same year, he left to go for studies at Louvain University in Belgium; in 1960 he earned his PhD.

On August 19, 1960, he was appointed to the faculty of Mt. St. Mary’s Seminary as Instructor in Philosophy as well as a Chaplain of the Newman Club at the University of Cincinnati, where he remained Chaplain until 1969.

In June 1972, he went on Sabbatical leave for one year to pursue studies in Moral Theology.

On October 23, 1973, he was appointed Pro-Synodal Judge in the Tribunal of the Archdiocese of Cincinnati while continuing on faculty at Mt. St. Mary’s Seminary.

In August 1979, he was appointed Director of Education at Pope John XXIII Medical Moral Research Center, St. Louis, MO, while continuing as part-time visiting professor at the seminary.

Associates of the Marian Pact are asked to offer, as soon as possible, one Mass for the repose of the soul of Father McCarthy, and when convenient, to provide for the celebration of two other Masses.

Today's Video: The Feast of the Epiphany; What is your Gift to the Lord Jesus Christ?