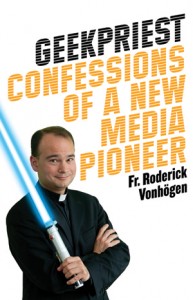 You can’t judge a book by its cover, but a photo of a Catholic priest holding a light saber is certain to get people’s attention.

Dutch Father Roderick Vonhogen is on one hand just your average parish priest, but he is also the founder of a Catholic podcasting empire and a pioneer in the field of Catholic new media.

His new book, Geekpriest: Confessions of a New Media Pioneer, published by Servant Books, chronicles not only his story from young Star Wars fan to Catholic priest, but also shows the growth, reach and effectiveness of new media for the church. The book is available for pre-order on Amazon and will hit shelves Sept. 10.

The Catholic Church has generally embraced each generation of new media. From Paul’s epistles to Pope Pius XI’s radio broadcasts to Bishop Fulton Sheen’s television programs, the church has always used the most modern means available to advance the Gospel. The rise of the digital age, however, has left the church in many ways lagging behind.

Parish websites are among the web’s most outdated items. Some priests scoff the need for even having an email address and there are those, both lay and clergy, who wish social media like Facebook and Twitter would just go away.

Father Vonhogen has a different take.

“New media can reach audiences at a deeper, personal, and even spiritual level,” than traditional media, he writes in the new book. “And that is why they are so important for the church.”

Years before Pope Benedict XVI wrote “Without fear we must set sail on the digital sea facing into the deep with the same passion that has governed the ship of the church for 2,000 years,” Father Vonhogen was doing just that.

He was among the internet’s first Catholic podcasters. A podcast, is essentially an audio or visual broadcast that is posted online and is made available for download. Audio podcasts are like a radio show, but instead of being available only certain hours each day and on a specific station, they are posted online and downloaded. Many are downloaded to mobile devices like smartphones and can then be listened to at any time.

Father Vonhogen began podcasting by carrying a digital voice recorder to the Vatican to chronicle the ailing Pope John Paul II in 2005. He would talk into the recorder while traveling to St. Peter’s Square as people gathered in prayer, or while walking down a busy Rome street. He would take the recordings back to his computer, add some editing, and just like that people could experience, through Father Vonhogen, what it was like to be there during that time.

The real meat of Geekpriest comes around the middle of the book. Father Vonhogen’s story about how his love of Star Wars and his interest as a child with then-newly-elected Pope John Paul II helped foster is vocation is interesting. The story of his early struggles as a priest, his marathon running and his near endless travels are also certainly worth reading, but the real value of this book comes in his descriptions of how new media works.

He offers real life scenarios that he was part of as evidence for how effective new media can be. Geekpriest talks about his podcasts at the Vatican, his conversations with Sean Patrick Lovett that led to Vatican Radio starting a podcast, and how eventually his interest in new media led him to present at a conference in the Vatican. From reporting on the death and election of a pope via podcast to founding a Harry Potter-based podcast from a Catholic perspective, Geekpriest shows that if the church’s message is brought to the young people of the world, they will respond.

His interest in “nerd” topics like Star Wars, Lord of the Rings, Harry Potter and new media technology gave rise to Star Quest Production Network multimedia organization that specializes in the production of audio and video programs faithful to the teachings of the church. Father Vonhogen is the CEO of the network, which has produced more than 30 podcasts, including hundreds of episodes.

Through a writing style that is easy to follow, Father Vonhogen uses the traditional media format of a book to put forward his case that new media is not something to be afraid of, but something to be embraced.

Seniors stories: Passing on a legacy

Elder abuse and neglect: what faith communities need to know