It was 1911 when 10 German-made stained glass windows were installed in what was then St. Stephen Church in Hamilton.

“Our parish has a rich history dating back to the 1800’s, and we are in the process of preserving those windows for future generations,” said Francine Beaty, parishioner and dedicated volunteer. “People walk into our church building and are amazed and inspired by the windows, so we decided to capitalize on that.”

Mary Richter, coordinator of RCIA and baptism preparation for the parish’s English community, was involved in the project and savvy about the church’s history. She said all church windows were evaluated in 2012 before a capital campaign. They were graded based on how a window consultant judged them – which ones were critical, which could wait, and which ones were in good condition. None of the 10 main windows had been restored since their 1911 installation. In the main body of the church, two windows were removed and re-leaded, Richter said.  Those two depict the Immaculate Conception and the Agony in the Garden.

“They were in the worst condition and five really needed work (as did) transom windows above the exit doors. Another in the choir loft had to be rebuilt because of the way it was installed,” Richter said.

The windows were identified as a critical element of a major church renovation project to be funded by a capital campaign launched in 2012 and completed earlier this year. It raised slightly more than $500,000.  With all the windows, the exterior frames were scraped, painted, woodwork replaced if necessary, and then storm windows were added.

“The name of our campaign was ‘Preserving Our Past, Preparing For Our Future’,” said Father Michael Pucke, pastor. “The people of St. Julie Billiart responded to the importance of preserving what they received from previous generations and to their responsibility to do the same for future generations. They are a solid, commonsense, generous people.

“The genesis of the campaign was actually the 80th anniversary of the Fenmont building” – today the parish center.  Originally, it mirrored a YMCA with housing, bowling alleys, a swimming pool and basketball courts.

“We did a facilities analysis to ascertain the physical condition of our buildings,” Father Pucke said. “We prioritized a number of projects to focus on the ‘envelope’ of our buildings. Water was getting through some of our church windows. Remaking some of the windows, scraping, painting, and sealing the wooden frames of all the windows, and putting new and properly vented outer protection headed up the list.”

Richter said the campaign kicked off in 2012. Of the more than $500,000 raised, about $50,000 was earmarked for the window project with the rest targeting building upgrades and renovations including brick work. While most of the funding came from pledges, about $17,000 was generated through various fundraisers — Christmas cards, ornaments, posters, a parish cookbook, split the pot raffles at parish events, and trivia nights.

The windows came from Munich and were designed and completed by F. X Zettler. On the west side of the church, the five windows are depictions from the Gospels. There are also other windows with Gospel depictions on the east side along with saints, she said.

“There is additional work needed in the future.” Richter said. “I don’t know if it will be next year with the archdiocesan campaign going on but there is a Phase Two. It will involve work to make things more accessible. We want to put an elevator in the center. We have a house that’s part of the parish property that needs renovation to make it more useful to the parish for classes and meetings. And, those windows that were graded as ‘needing attention’ will probably get it. The fact we’ll likely get some money back from the archdiocesan campaign will help as well.”

St. Julie Billiart houses one of the archdiocese’s largest Spanish speaking Catholic communities. There are about 715 English-speaking families. Another 350 to 400 families are Spanish-speaking.

“People travel here for the Spanish Masses,” Richter said. Many Hispanics settle in the area … because of the proximity to Mass every week. The church accommodates about 800 for Mass.”

This feature first appeared in the January 2016 print edition of The Catholic Telegraph. 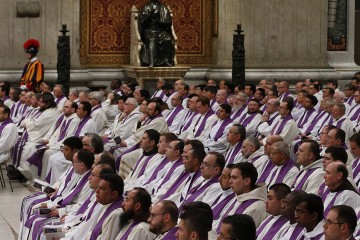