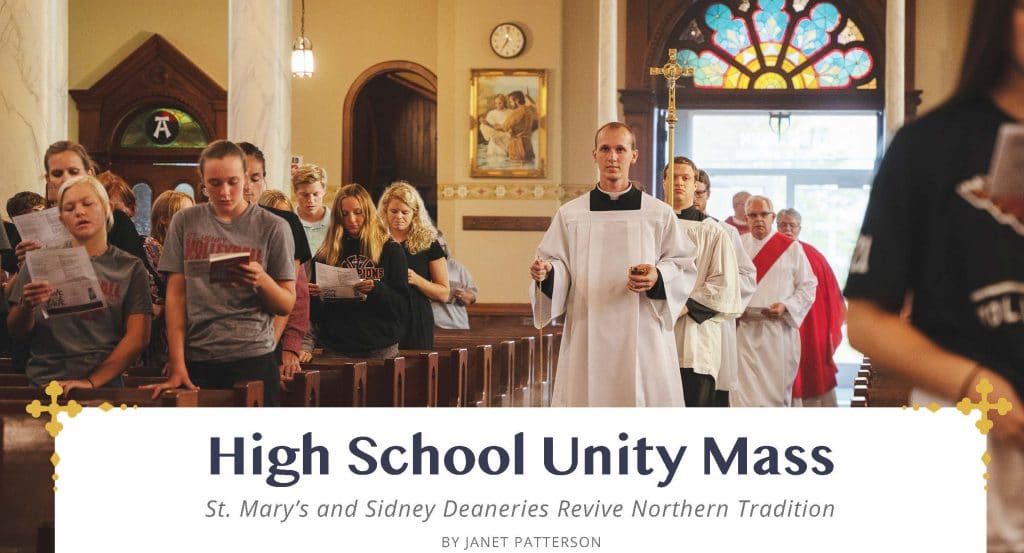 A late afternoon thunderstorm did not dampen the spirits of 150 high school students who attended the Youth Spirit Mass on Aug. 11. They simply switched the Mass location from the open front lawn of the Maria Stein Spiritual Center to St. John Church a short distance away.

Wearing their school colors, students from high schools in the St. Mary’s and Sidney Deaneries gathered for the revival of a previous tradition. Father Rick Nieberding, C.PP.S., who died in 2019, celebrated the MAC (Midwest Athletic Conference) Unity Mass every August, drawing athletes from all the schools of conference.

“It’s been four years since the last MAC Unity Mass,” said Father Steve Dos Santos, C.PP.S., who preached the homily. “At that Mass, Father Rick would always say, ‘Tonight, we are not competing. Tonight, we are celebrating what holds us together: one faith, one Lord, one baptism.’”

He reminded students, “Before you were Tigers, Wildcats, Flyers or Cavaliers, you were members of the Body of Christ. Before you put on the school colors you wear tonight, you put on the white cloth of baptism.”

“Society teaches us to be egocentric; to focus on ‘me,’” Father Dos Santos said. “The team mentality is one we must extend to the rest of the Body of Christ and to the whole world… You are called to be an example to others…to do that with the same fervor with which you compete.”

While the results on the athletic field are important to the students today, Father Dos Santos said that the “life results” take priority in the ways “you show the love of Christ.”

Tom Kueterman, St. Mary’s Deanery Director, proposed the idea of reviving the Mass tradition. In collaboration with area youth ministers and Christen Aquino, Director of Parish Evangelization for the archdiocese, the team discerned the event met the needs of the youth at the north end of the archdiocese.

Joe Lundin, a worship leader in the Cincinnati area, and Miley Azbill, an Alter High School graduate and sophomore at the University of Dayton, provided music for the Mass.

“It was really a cool experience,” said Olivia Mescher, a sophomore at St. Michael in Fort Loramie, and a basketball player at Fort Loramie Junior-Senior High School. She and her sister, Victoria, a freshman, went to the Mass together. “It was good to see a whole bunch of students together praying,” Mescher added. She also found the message of Catholic author and speaker, Dr. John R. Wood, after Mass inspiring. “I hadn’t thought about becoming a saint. You think there’s no way, but he said it’s about doing the little things that makes a saint.”

Freshman Luke Kunkler agreed. “[Dr. Wood] had an inspiring testimony that you can’t do it all by yourself. It’s important to ask God to give you strength to do good work.” Kunkler is a parishioner at St. Sebastian in the Marian Catholic Community.