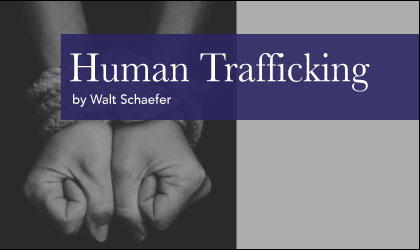 The new face of slavery in Ohio

Part two of a series on a pressing issue for our region, and on the Catholic response to it.

They pour across our southern borders from Mexico and Central and South America.

They come from India and Pakistan and Afghanistan. They are drawn from the Middle East. All search for a land of promise, if not the Promised Land.

Immigrants still seek the prosperity, freedom and liberty symbolized by that statue in New York Harbor. But, often enough, these people become victims of predators — human traffickers who trap them in their webs and force them into a modern-day form of slavery as vile as the one abolished in the 1860s.

Human trafficking, much like the viper it is, has two fangs: sex trafficking and labor trafficking. At times, they overlap.

“Labor trafficking, in general, would involve people on some sort of expired immigration status, here completely illegally or even here legally,” said Specialist Nate Young of the Cincinnati Police Vice Squad, responsible for investigating labor and sex trafficking crimes along with the FBI.

These victims are most often in service jobs such as restaurant workers, nail salon employees, crop pickers and domestics. “Locally, there is a large contingent of Hispanic workers that draws my attention,” Young said. These pickers can be working anywhere there are farms and crops ready for harvest.

“Most of these victims are brought in through the (illegal trafficking) trade from other countries — many smuggled in” on the promise of a bright future, a well-paying job and comfortable life.

“It sometimes happens that someone is going to get a legal work permit visa to work in agriculture or domestic service,” Meyer said, “and they are tied to traffickers in the sense that the trafficker has control of the visa. Then the trafficker has the ability to use that as a threat” to exploit people in the country legally. Others come legally but overstay their visa, Meyer continued, and meet up with smugglers who traffick them with similar threats.

Those smuggled into the United States often pay the smuggler a hefty fee to get here: “It’s going to cost you $10,000 to cross the border and $20,000 more when you arrive,” Meyer said. “If you don’t have the money, [they say] ‘You can work it off at a sweatshop or at my uncle’s brothel.’

Perhaps the most glaring case in southwest Ohio involved Harold D’Souza and his family, who came here from India in 2003. They were caught in a trafficking web that saw D’Souza and his wife, Dancy, working 15-hour days at a Blue Ash restaurant while living in a tiny  apartment where their children, Rohan, then four, and brother, Bradly, then seven, slept on the floor. The restaurant has since closed.

“Profit is the motivation. The risk factor is very thin. If you talk to the law enforcement agencies, the perpetrators are not prosecuted. That is very common. There are so many loopholes where perpetrators can get away,” D’Souza said. The man who allegedly trafficked D’Souza’s family has never been prosecuted and walks the streets of Hamilton County today.

D’Souza eventually sought help from End Slavery Cincinnati and later was put in contact with agents of the FBI in 2007 — four years after his family’s ordeal began.

“By then, most of the evidence was gone, and many times law enforcement agencies are not very keen to prosecute. They make charges against perpetrators but nobody goes to jail,” D’Souza said.  “In my case, my perpetrator hired a guy to shoot me.

“The biggest issue is that nobody complains,” he said. “Victims don’t have the courage to stand up and allow their trafficker to be prosecuted. I went through so much suffering. I’m going to continue to fight for my wife and my children, but so many victims do not have the courage to go to the law enforcement agencies.

“People who deal in human trafficking are not considered criminal. The problem is the process is so slow the perpetrators are one step ahead of the game. They know how to traffic and they know how to get out of it,” D’Souza said.

“The victims are criminalized,” D’Souza said, explaining that his trafficker forced him to take out a large bank loan. The trafficker got the money and D’Souza, who said he was not allowed to make payments on the loan, got the debt. “I thought I was a criminal,” he said. “But when someone forces you to lose something, it doesn’t mean you’re a criminal.”

The D’Souza family experience is heart-wrenching and it is hard to comprehend it happened here.

They trusted the man who promised them a better life in America. They were told a nice house, a lucrative restaurant job, and better lives for their children were waiting. Even the prospect of someday owning the restaurant was suggested.

They received nothing but empty promises. Their wages were withheld to “repay accrued debt,” their visas taken for “safe keeping,” and they were threatened with deportation by the trafficking restaurant owner if they sought help from law enforcement or agencies.

At one point, D’Souza’s life was threatened, but the shooter mistakenly focused on someone else. While the FBI investigation stalled for lack of evidence, End Slavery Cincinnati successfully placed the family in its trafficking assistance program. D’Souza did odd jobs and accepted assistance from area churches and other outreach organizations. Although an FBI complaint was filed, the investigation faltered because evidence was lost during the lengthy time span involved.

Today D’Souza today works at Children’s Hospital Medical Center. His family’s experience, he said, is not unique. “Most victims are humble, honest, and good human beings, and the perpetrator knows how to use that,” he said. “Traffickers are in it for the money. They live a good life, and they use people.”

A sad statistic: More than 25 labor trafficking complaints are reported in greater Cincinnati a month. The number is increasing.

Read part one of this series, on sex trafficking in Ohio, here.

The remaining stories in this series will cover police and charitable responses to the challenges of sex and labor trafficking.

The Trafficking Victims Assistance program run by Catholic Charities Southwestern Ohio helps victims of sex and labor trafficking and their famlies. Visit Ccswoh.org/trafficking for help or to volunteer.