BALTIMORE (CNS) — It will come as no surprise to anyone who has followed Los Angeles Archbishop Jose H. Gomez that immigration reform is at the top of his priority list as the newly elected president of the U.S. Conference of Catholic Bishops.

"That’s something I’ve been working on for almost 25 to 30 years," Archbishop Gomez told Catholic News Service during the U.S. bishops’ fall general assembly Nov. 11-13 in Baltimore.

On Nov. 12, the body of bishops elected him to lead them for a three-year term, and he is the first Latino to hold the USCCB presidency. Archbishop Gomez has served as the conference’s vice president since 2016. As president, he succeeds Cardinal Daniel N. DiNardo of Galveston-Houston. His term begins at the end of assembly.

For the 67-year-old shepherd of the largest archdiocese in the U.S., Catholic teaching drives his advocacy for migrant rights, based on biblical principles of welcoming the stranger and upholding the dignity of immigrants and refugees as children of God.

In fact, the U.S. bishops have listed immigration reform and migration rights as a top priority for many years. The bishops have sparred with the Trump administration over its policies for asylum-seekers at the border.

Pope Francis also has made migrant rights a top priority during his papacy.

"It’s really part of my life," he said. "I have relatives and friends … on both sides of the border. So, I think it’s important for us to understand that we are all children of God. If we work together, we can find a solution for this reality and come up with a really clear, simple and good immigration system that can address the needs of the people on both sides."

Violence and poverty at home have been a driving factor for Central Americans seeking refuge in the U.S., but Archbishop Gomez points out that migration is more than an American issue — it’s a global concern.

According to statistics reported by the U.N. High Commissioner for Refugees, by the end of 2018, "70.8 million individuals have been forcibly displaced worldwide as a result of persecution, conflict, violence or human rights violations."

The Bush and Obama administrations both attempted and failed to get immigration reform passed through Congress to make it easier for immigrants to legally migrate to the U.S.

The U.S. bishops were in dialogue with previous administrations to develop what they believe is a humane resolution to the immigration debate.

Archbishop Gomez said he will continue to talk with President Donald Trump, whose administration has been criticized by Catholic advocates for its policy of separating families at the border, its restrictions on immigrants seeking asylum and a proposal to further decrease the number of refugees accepted into the United States.

The Catholic Church does defend a nation’s right to secure its borders, but most of the world’s migrants are leaving their homeland to escape war, violence and extreme poverty, he said. "There is a lot of suffering. Most of them come to our country because they want to provide for their families."

Ahead of the Nov. 12 oral arguments on the Deferred Action for Childhood Arrivals program at the U.S. Supreme Court, Archbishop Gomez said there are "no doubt" constitutional and legal questions "raised by DACA and how it was enacted."

"But we need to be clear: The fate of these young adults should never have been in the courts in the first place," the archbishop wrote in a Nov. 6 column in the Angelus, the online news outlet of the Los Angeles Archdiocese. "And it would not be, if our leaders in Washington would simply set aside their political interests and come together to fix our nation’s broken immigration system."

The "failures" of the nation’s leaders in Washington to make "comprehensive reforms to immigration policy "cut across party lines," Archbishop Gomez said.

DACA was established by President Barack Obama’s 2012 executive order, and Trump ordered an end to the program in 2017. Several legal challenges to this order have resulted in a consolidation of three DACA cases now before the high court.

"Our nation made a promise to these ‘Dreamers,’" Archbishop Gomez wrote. "We have a moral obligation. It is time for the president and Congress to honor that promise and live up to this obligation."

Though he’s passionate about immigration reform, the archbishop said he will not be a single-issue president of the USCCB.

Continuing renewal and reform in the church with regard to the clergy sexual abuse crisis will be an ongoing priority, as will combating clericalism in the church, support and promotion of marriage and the family and evangelization. And he will continue to pray for the laity to become missionary disciples.

"It has been a challenging time for the church in these past three years," Archbishop Gomez said, and as vice president of the USCCB, he had a leadership role in dealing with the crisis. "I hope I continue to be a source of support for my brother bishops and especially to continue this time of renewal." 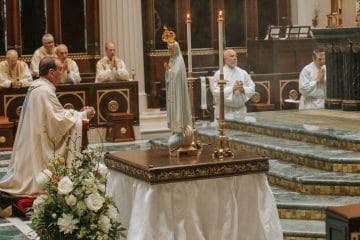