The archbishop of Kansas City in Kansas condemned the recent attack on a local Catholic church ahead of the state’s vote on a pro-life amendment.

“This attack and others targeting Catholic churches in Kansas and across the country are not only vulgar but un-American,” Archbishop Joseph F. Naumann said in a July 10 statement.

Over the weekend, parish buildings and a statue of the Blessed Mother at the Church of the Ascension in Overland Park were “extensively defaced” with red spray paint in an “overt act of hatred and incivility,” the archdiocese said.

“The intention is clearly meant to intimidate and threaten the Church’s pro-life beliefs and position of support for the Value Them Both amendment,” Naumann commented.

On Aug. 2, Kansans will vote on a pro-life amendment, known as the “Value Them Both” amendment. If approved, it would enable state lawmakers to pass legislation to regulate abortion. Currently, lawmakers are generally prohibited from restricting abortion after the Kansas Supreme Court ruled in 2019 that the state’s constitution protects abortion.

The archdiocese noticed an “escalating pattern of theft, vandalism and intimidation targeting members of the Catholic Church and other supporters of the Value Them Both amendment.”

Naumann stressed that this latest attack does not deter the Church’s pro-life mission — or its support of the pro-life amendment.

“Value Them Both will secure protections from an unlimited and unrestricted abortion industry that is attempting to buy this election so it can further prey on women facing unplanned or challenging pregnancies,” he said. “The Catholic Church remains firm in its support of mothers and preborn babies and our members are more firmly dedicated to our mission than ever before.”

According to the archdiocesan newspaper, The Leaven, the attack occurred around 1 a.m. on Sunday, July 10.

“The school’s doors and building were spraypainted with hateful messaging, and a statue of Mary was also spray painted,” the newspaper tweeted. The Leaven shared photos showing the words “MY BODY MY CHOICE” spray-painted across a building in big, red lettering.

The newspaper added: “For those asking, the school doors were vandalized with wording we will not repeat here.”

The Leaven also shared a photo of the defaced Mary statue, which it said it obtained from a parishioner. It showed red paint flowing like blood from the statue’s heart to her feet.

According to the archdiocese, the authorities were notified.

Supporters of the pro-life amendment have been targeted before, according to Mackenzie Haddix, the deputy communications director for Value Them Both. The coalition is led by Kansans for Life, the Kansas Catholic Conference, and Kansas Family Voice.

“The attacks on the Church of the Ascension in Overland Park are heartbreaking and inexcusable,” Haddix told CNA. “This is not the first time vandalism has taken place at churches expressing support for the Value Them Both Amendment.”

Haddix called on pro-abortion groups opposing the amendment, such as Kansans for Constitutional Freedom, to condemn the “hateful actions that took place at Ascension and the vandalism and theft that has taken place across Kansas.”

She pointed to the vandalism of church signs and signs in support of the pro-life amendment.

“We continue to receive reports of individuals who have their signs vandalized on a daily basis,” she said. “Most of the time, they are spray-painted with vulgar messages, but many have also been punched or destroyed completely.”

In a statement responding to the recent attack on his church, the pastor of the Church of the Ascension, Father Gary Pennings, said that the parish’s signs in support of the amendment “have been repeatedly vandalized and many parishioners have reported their yard signs stolen.”

“While this is a sad event, it is not surprising,” he said of the attack, which he called “likely an angry reaction to the Church’s advocacy for the passage of the Value Them Both Amendment.”

He encouraged his parishioners “to not lose heart, to stand firm and to never tire of doing good.”

“Let your faith, informed by the teachings of Christ’s Church, guide your conversations and your actions,” he concluded. “Learn the true facts about the Value Them Both Amendment and do not shy away from reasoned dialogue about the issue.

“Never fear telling others why we Catholics believe what we believe, always doing so, of course, with patience and charity. Last but certainly not least, please pray for peaceful dialogue, mutual respect and a sincere pursuit of truth.” 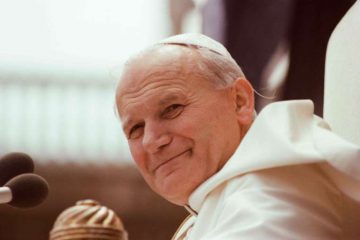