Is Having Friends Actually Important?

Everyone Wants to belong to a parish they love.

Knights of Columbus General Agent José Lebron-Sanabria, who led the Knights’ recovery efforts after Hurricane Maria decimated Puerto Rico in September 2017, is coordinating assistance to those in need of the latest natural disaster. He is working with the Diocese of Ponce to bring food, water and nutrition drinks, like Glucerna and Ensure, to a religious monastery, home to 25 elderly nuns. Eight are bedridden and 17 require walkers. He is also working to transport them to safety from Guánica to Ponce.

Meanwhile, Puerto Rico State Deputy Jose Vazquez-Padilla and other Knights purchased 20 canopies to bring to the now homeless living outside of San Antonio Abad parish in Guánica. Not only are they providing immediate shelter, but more than 300 Knights will be cooking 1,000 hot meals for those affected by the earthquakes in Guayanilla on Sunday.

However, 20,000 people from the town of Guánica are living and sleeping outdoors, according to Father Segismundo Cintron, a Knight of Columbus from Don Juan Ponce de León Council 1719. Every structure in town has been deemed unsafe and uninhabitable in the aftermath of the earthquakes.

The island is home to 5,240 Knights and 81 councils. Eight councils in the southern part of the island have reported urgent and immediate needs. However, the Puerto Rican jurisdiction currently has no money available in their disaster relief fund. Currently, Knights are providing aid out-of-pocket.

The Knights of Columbus are dedicated to helping those in need following natural disasters, donating $2.7 million in total last year. Recent efforts include helping more than the 70,000 residents of the Bahamas impacted by Hurricane Dorian, the victims of historic flooding in the Midwest and donating more than $200,000 to victims of the California wildfires.

Following Hurricane Maria, the Knights donated $1.57 million with $50,000 of that going to repair an orphanage and school for girls run by the Daughters of Charity.

Now, Puerto Rico faces another crisis. Father Cintron, a priest at San Antonio Abad in Guánica, is requesting 25 to 30 tents and canopies to create a refuge center outside of the church.

Nearby in Guayanilla, La Inmaculada Concepción church lost both of its bell towers and collapsed due to the seismic activity. The nearly 180-year-old church withstood a large earthquake in 1918, but now the only thing left is the parish courtyard.

It’s where Father Melvin Díaz Aponte, a Knight from Council 1719, has been celebrating Mass. He told EFE News of his sadness witnessing the pain of the parishioners.

“We want to support them, help them and do what we have to do, as we all should,” he said.

He assured the congregation that they will rebuild, according to the New York Times. La Inmaculada Concepción is one of three churches that have been razed to the ground as a result of the earthquakes. Knights have brought the churches canopies so the parish priests will be able to continue Masses for their congregations.

The series of earthquakes, the highest being a 6.4 on the Richter scale, have leveled towns and parishes on the southern coast of the island. At least one person has died and Gov. Wanda Vázquez Garced has declared a state of emergency. Aftershocks continue to rock Puerto Rico.

So far, 15 Knights have lost their homes. Eight have been given wheelchairs due to injuries sustained from the earthquake by Knights around the island. A daughter of Alberto Serrano-Torres, the grand knight of Padre Antonio Uriarte Council 14281, was hospitalized after suffering a head injury when a bunk bed collapsed on top of her.

Lebron-Sanabria and other Knights have been welcomed with open arms for their assistance to victims so far, especially by the local priests and religious in more than 10 towns Knights are currently providing relief to.

“I have a tool to offer my community and that is the Knights of Columbus,” Lebron-Sanabria said.

To help with our disaster relief efforts, click here. 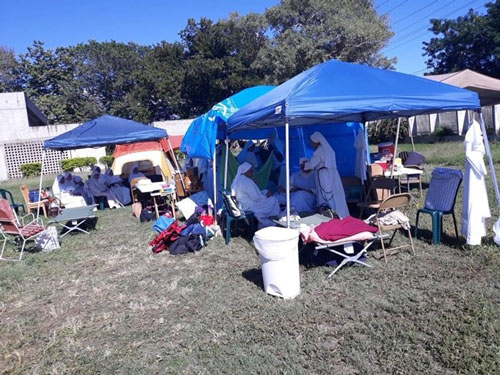 How Did Catholics Get ‘Under God’ into the Pledge of Allegiance?

Archbishop Lori: Knights of Columbus must be at the forefront of Eucharistic renewal