During the ceremony, 108 candidates were initiated in the K of C’s Fourth Degree, the purpose of which is to foster patriotism in members and the community at large and encourage active Catholic citizenship. The Fourth Degree is the highest degree of the order. Richard Tabler, master, Ohio District 2, said candidates must be at least Third Degree knights and are asked to join the Fourth Degree.

Archbishop Dennis M. Schnurr was the keynote speaker at the event.  During his presentation, the archbishop spoke of the virtues exemplified by the three degrees of knighthood — charity, unity and fraternity — and said, “The active witness of the knights, and especially the depth of your commitment in seeking entrance to the Fourth Degree, signals that the faith we love is flourishing in our archdiocese, and I am grateful.”

The Fourth Degree is the natural flowering of lives lived in charity, unity, and fraternity,” the archbishop said. “Those who voluntarily enter into the commitment required by the Fourth Degree are answering the call to live both their faith and their citizenship to the fullest.”

“Just as popes in the past called knights of old to take up the cause of renewing Christendom, our Holy Father is calling you today to reach out to a country and a world in grave need of the good news of Jesus Christ,” Archbishop Schnurr told the knights.

“Ours is a country that has already received the proclamation of the Gospel, but stands in need of a new evangelization,” he said. “Five minutes’ viewing of the nightly news tells us how quickly the good news can be swallowed up in the chatter of secularism if we do not speak it boldly.”

“True Catholic patriotism, the quality embodied by the Fourth Degree, can be the means of this new evangelization,” the archbishop added. “That is because a patriotism informed and enlivened by faith is never blind nationalism that places the welfare of the state above the goals of the kingdom of God. True Catholic patriotism is not passive assimilation into the prevailing culture. Where necessary — as it is today — true patriotism is counter-cultural, calling systems and structures to account when they fall short.”

Archbishop Schnurr concluded by reminding the knights they are not alone in their vocation and that they have the support of their families and the blessings and gratitude of their parishes, the archdiocese and the whole church. “And, as our Holy Father reminds us, you go with God, for whom nothing is impossible,” he said. 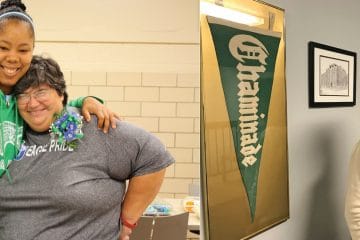