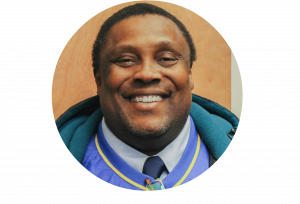 When Kris Lee was 15-years-old, he attended Easter Sunday Mass with a close friend. While his life up to this moment had not been void of religious faith – his grandmother was a Pentecostal Minister – it was the first moment he realized something significant had been missing from his life. As he finished high school, he continued to practice his family’s Pentecostal faith, while also periodically attending Catholic Masses with his friend.

“My grandmother was a huge role model for me. As I began to explore my faith, she supported and encouraged me along my journey” remembered Lee.

That journey led him to a class on World Religion in college at Wright State University. It was through this study and exploration that he found himself reflecting on what he had experienced during Catholic Mass. By the time he was 25, Lee was enrolled in the RCIA program and dating his future wife, Peggy.

Even though he had begun his journey to Catholicism before they met, she made it clear that they would never be married if he did not complete the process, to which he mused, “It’s a good thing God led me on that path before I met her or I would have really missed out!”

Kris is a graduate of Piqua High School, where he also worked as a substitute teacher for many years while actively serving as police officer in the community. He was proud of his alma mater and the public education he received, but he and Peggy both agreed they wanted their children to experience something more.

“We wanted our children to have the ability to learn about the Catholic faith while they were growing. Most importantly, we wanted them to have the opportunity to pray while at school, so we chose Piqua Catholic [for K-8] and Lehman Catholic [for high school],” he said.

The couple are blessed with five children, and Lee has been focused on being actively involved in all aspects of their lives. In addition to substitute teaching and serving as a police officer, Lee volunteered his time as president of the school board, was an active member on the parish council and spent numerous years coaching basketball, tennis and soccer. He credits his dedication to his unwavering desire to bring God to the lives of those around him.

Four of his children have graduated high school (the youngest is 13), and three of those four attended Capitol University in Columbus. While he and Peggy are proud of the faith-filled adults their children have become, a few years ago God called on them to nurture another young life.

Before his sister passed away from breast cancer in 2014, she asked Kris and Peggy to take custody of her daughter. During those conversations, Kris reminded her that they send their children to Catholic school and he wanted to ensure she would be ok with that.

“She said she trusted us. That made us both feel good about the decision and now her little girl is thriving as a student and athlete. We know she would be so proud,” smiled Lee.

INSPIRED TO A HIGHER CALLING

Unfortunately, his sister was not the first sibling Lee has lost. In 1996 his youngest brother was involved in a car accident and did not survive. Lee was tasked with identifying the body and confirming the tragic news to his parents. His newly-found faith was immediately tested.

“My first reaction was to blame God. I think that’s common for many people who experience a tragedy or lose a loved one,” he recalled, “but I remained faithful and He guided me to do something useful with the experience.”

His brother was under the influence of drugs and alcohol when he crashed his vehicle. Inspired by his faith and desire to help his community, Lee became a D.A.R.E. officer for the city of Piqua. For more than 10 years, he shared his brother’s story as a way to connect with local youth and let them know the consequences of dangerous substance abuse.

After 23 years of service as a police officer, Lee followed God’s calling once more and ran for Piqua City Commission to service as a voice of openness for the citizens. He won with more than 80 percent of the vote, and in 2020 was voted Mayor of the City of Piqua. In addition to his duties as mayor, he also serves as a safety officer at a career-technical school and is a part-time lieutenant
for the Village of Anna police department.

This past year, Lee has taken on the unique challenges that came with leading a city through a pandemic in stride. He even contracted COVID-19 and battled it for nearly two weeks.

“I was very ill, but I was able to recover from it and get back to work. I guess God wasn’t ready for me to be done yet. He still has more for me to do.”

Living a faith-filled life is a work-in-progress and life-long journey. Kris Lee is a reminder that living a life focused on Jesus and trying our best to follow His teachings will lead to a life that inspires others and positively impacts the world.