August 6, 2022 The Catholic Telegraph
Home»Features»African Americans on the Path to Sainthood
Features/Home Page

“In every age and culture, communities have raised up men and women who lived saintly lives in the movements of their day. In every continent, the Church has canonized men and and women to whom we can acknowledge the possibility for everyone to aspire to live as excellent witnesses of God’s saving power. The Church needs the example of these six candidates in order to celebrate God’s active presence in a period of American history that was oppressive and unjust. We need the example of holiness lived by these African Americans under extreme adversity. In the Church’s profession and belief that all humanity is created in the image of God, these candidates provide a public way for the Church to embrace the gifts of blackness. Saints of God, pray for us.”– Deacon Royce Winters, Director of African American Ministries. 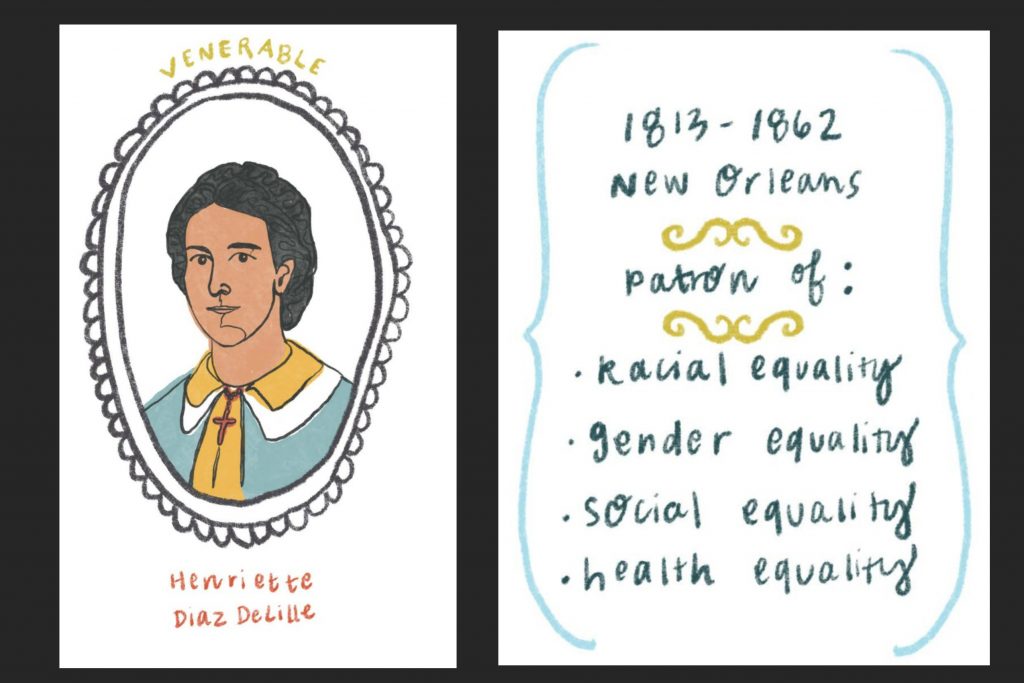 Henriette was born in New Orleans, LA, in 1813 to Marie-Josèphe “Pouponne” Díaz, a free woman of color, and Jean-Baptiste Lille Sarpy, a native of France. Her parents were united as part of the plaçage system wherein European men had common law marriages with African American and Creole women. Henriette was trained in French literature, music and dancing with the expectation that she too would find a plaçage partner.

Instead, Henriette rallied against the plaçage system and was drawn to the Catholic Church, in particular to Sister Mathe Fontier who opened a school for girls of color in New Orleans. She began teaching at a Catholic school when she was 14, caring for and educating the poor.

This educational work led her to found a small congregation of nuns named the Sisters of the Presentation. Together the group of Creole women cared for the sick and poor, and educated both free and enslaved children and adults. They also opened America’s first Catholic home for the elderly.

In 1837 the religious order received formal recognition, and in 1842 they changed their name to Sisters of the Holy Family. The sisters’ legacy includes caring for the sick during the Yellow Fever epidemic and running parochial schools. They remain active today. 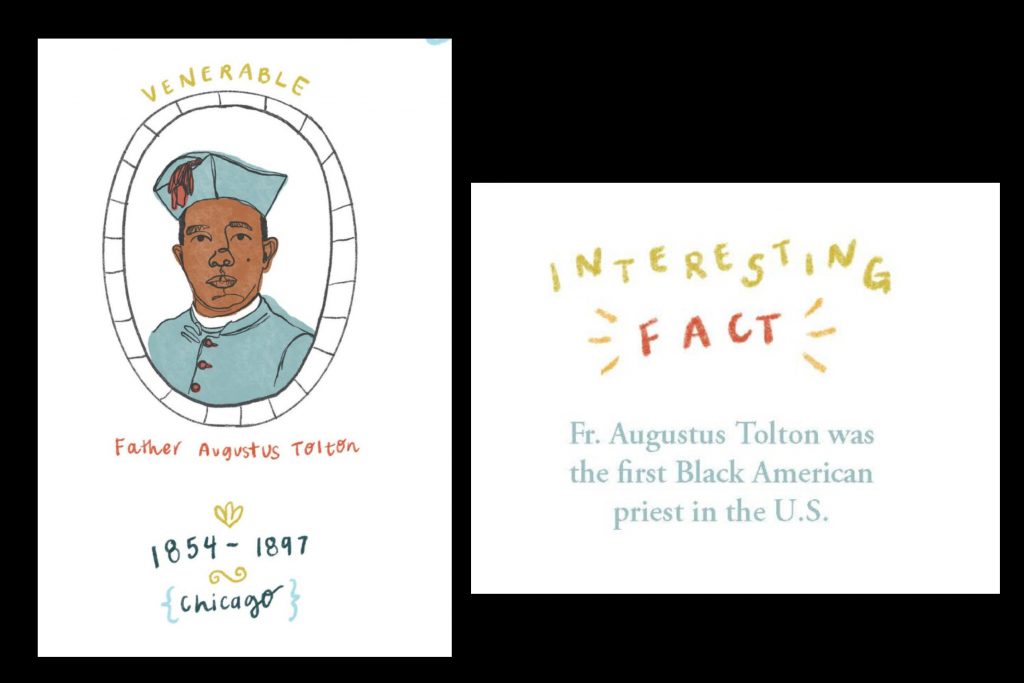 Augustus was born a slave to parents, Peter and Martha, in Missouri. His family escaped slavery: Peter fled and joined the Union Army, and Martha escaped with their children to the free state of Illinois.

Once in Illinois, the family, including Augustus’ mother and siblings, worked for a tobacco company. There Augustus met Father Peter McGirr, an Irish immigrant priest who helped him attend St. Peter’s parochial school during the winter months. Allowing an African American child into the school was met with great resistance, but Father McGirr continued to advocate for Augustus and allowed him to continue his education.

Augustus desired to be a priest, but was rejected by every American seminary. Father McGirr continued to advocate for him, and eventually Augustus was able to study in Rome. He graduated from St. Francis Solanus College and attended Pontifical Urbaniana University. Tolton was ordained to the priesthood in Rome in 1886 at age 31, making him the first Black Roman Catholic priest in the U.S. His first public Mass was in St. Peter’s Basilica on Easter Sunday in 1886.

He returned to Quincy, IL, where he faced opposition from both Whites and Black Protestants. He was eventually assigned to Chicago. There he led the development of “negro national parish,” St. Monica’s Catholic Church. The parish grew from 30 parishioners to 600 with the construction of the new church building, and brought him national recognition. St. Mother Katherine Drexel, an heiress, contributed financially to Father Tolton’s parish. 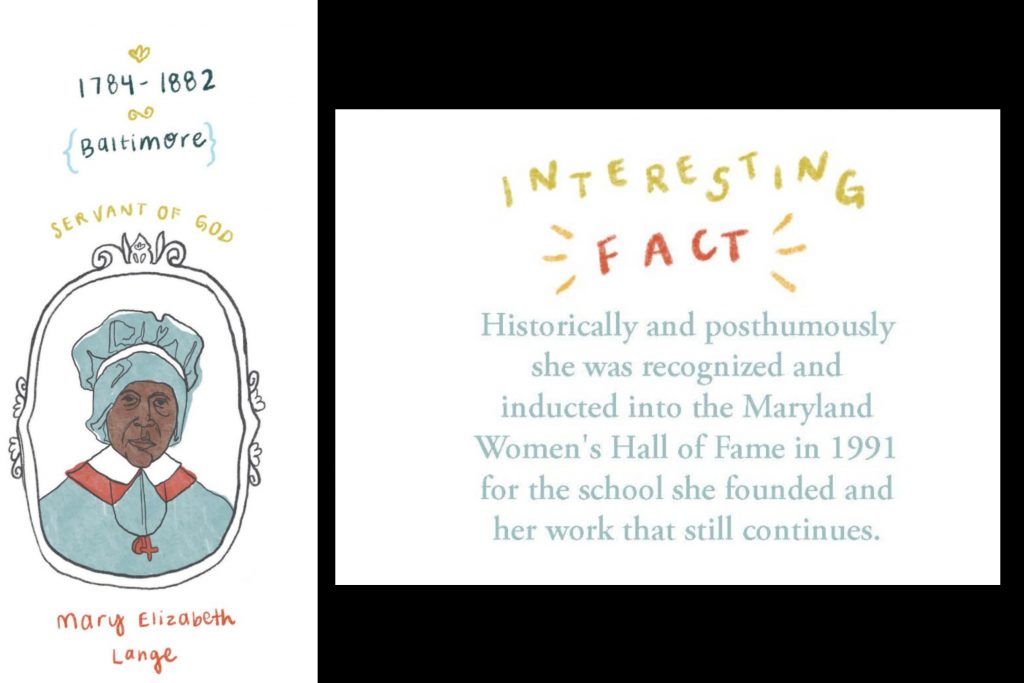 Elizabeth was born in Cuba, in a Haitian community, in 1784. She immigrated to the U.S. in the early 1800s, eventually settling in Baltimore, MD. When she arrived in the city, the free African American population was growing rapidly. Despite the efforts of other Protestant organizations opening schools to meet this growing need, they could not keep up. Elizabeth saw this need and opened a school in her home to educate African American children.

The trajectory of her life changed when she met Sulpician priest James Nicholas Joubert, S.S., a French native. He taught the Catechism to African American children, but struggled to do so because many of the students were not good readers. A friend introduced him to Elizabeth and Marie Balas. Together they agreed to start a school for girls, and founded a new religious order. Their order, the Oblate Sisters of Providence, was the first religious congregation of women of African descent in the U.S.

Elizabeth took the name “Sister Mary,” and became the order’s first religious superior. Together she and four other sisters founded a school, later known as St. Frances Academy, which is still in operation today.

Despite fighting against racism and poverty, the Oblate Sisters evangelized the Black community through Catholic education, including classes for women and career training. They also established homes for widows and orphans, and aided the sick during the cholera epidemic. 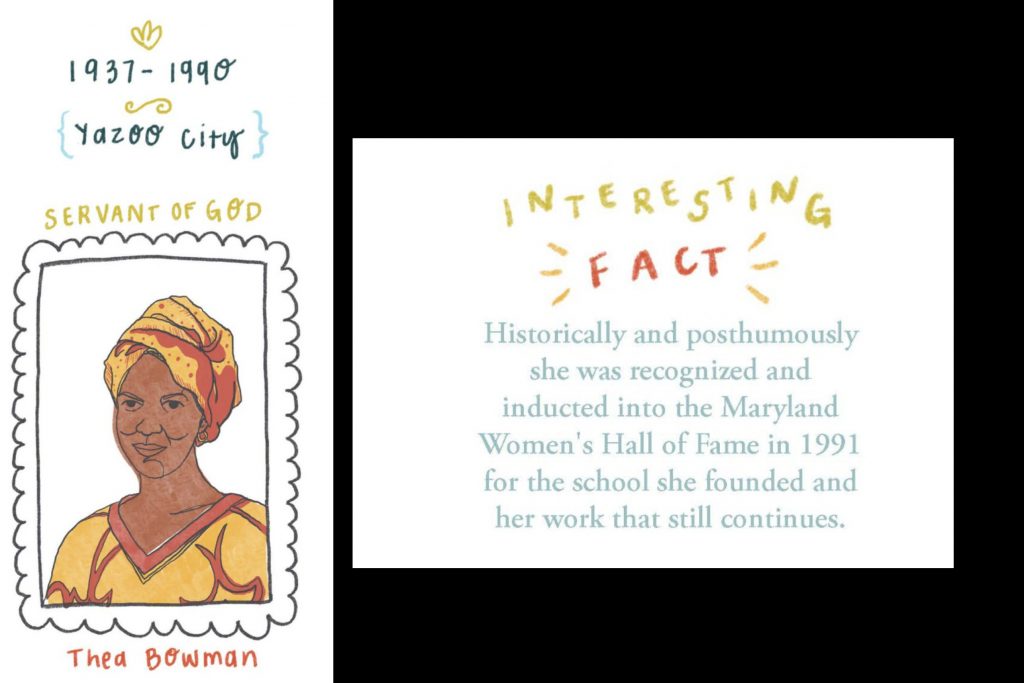 Thea was born in Yazoo City, MS, in 1937. While her grandfather was a slave, her parents had successful careers – her father a doctor, and her mother, a teacher. With their permission, Thea converted to Catholicism when she was 9-years-old, and later joined the Franciscan Sisters of Perpetual Adoration in Wisconsin as the only African American member.

Her education was extensive. She earned a B.A. in English before attending The Catholic University of America in D.C., earning a M.A. and Ph.D., both in English. Following graduation, she taught at schools all over the U.S. for 16 years.

She then moved to Jackson, MS, where she served as the diocesan consultant for intercultural awareness. Thea used her dynamic mind, voice and personality to give presentations across the country. Her goal was to break down racial and cultural barriers, and she encouraged others to communicate and understand one another.

Thea played a tremendous role in publishing the Catholic hymnal, Lead Me, Guide Me: The African American Catholic Hymnal. Within the hymnal is an essay written by Thea, wherein she wrote, “Black sacred song is soulful song.

Immediately before her death, Thea spoke to the United States Conference of Catholic Bishops from her wheelchair. When she finished speaking, they stood linking arms and singing as Thea led them in the spiritual, “We Shall Overcome.” 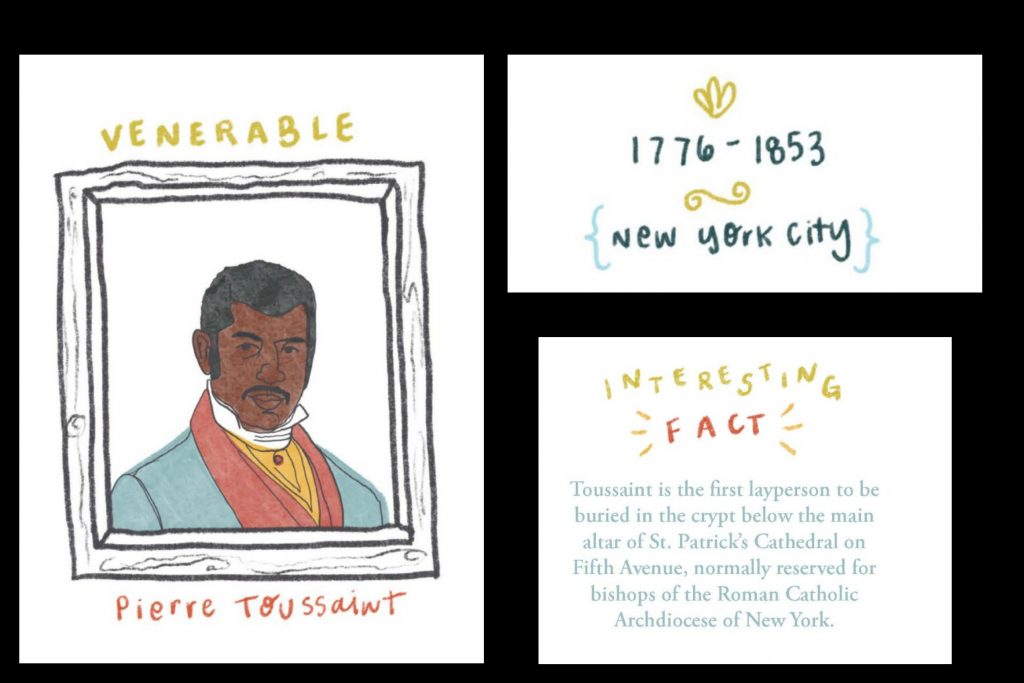 Pierre was born in Haiti in 1766 as a slave to the Bérard family. He was trained as a house slave and educated by the family’s tutors. As slaves and free people of color began to rise in rebellion in Haiti, the Bérard family Red to New York, taking Pierre with them.

Upon arrival in New York, Pierre apprenticed as a hairdresser. When Jean Bérard died, Pierre stayed on with his widow. Upon her death, she freed Pierre. With his saved earnings as a hairdresser, Pierre purchased his sister, Rosalie’s, freedom.

He married Juliette Noel, a slave whose freedom he purchased. Together they adopted Pierre’s niece after his sister died of tuberculosis. The Toussaints used the income Pierre made from his successful career to support the local orphan asylum, and often brought them baked goods. Their generosity extended to opening up their own home to orphans and foster care – supporting them in education and learning a trade. He was also a friend to refugees and immigrants from Haiti, helping them establish income.

Pierre’s faith was an important part of his life. He attended daily Mass and helped raise the money to build St. Patrick’s Cathedral in New York, as well as the first New York City Catholic school for Black children.

He died at age 89. His ghostwritten memoir was published in 1854. 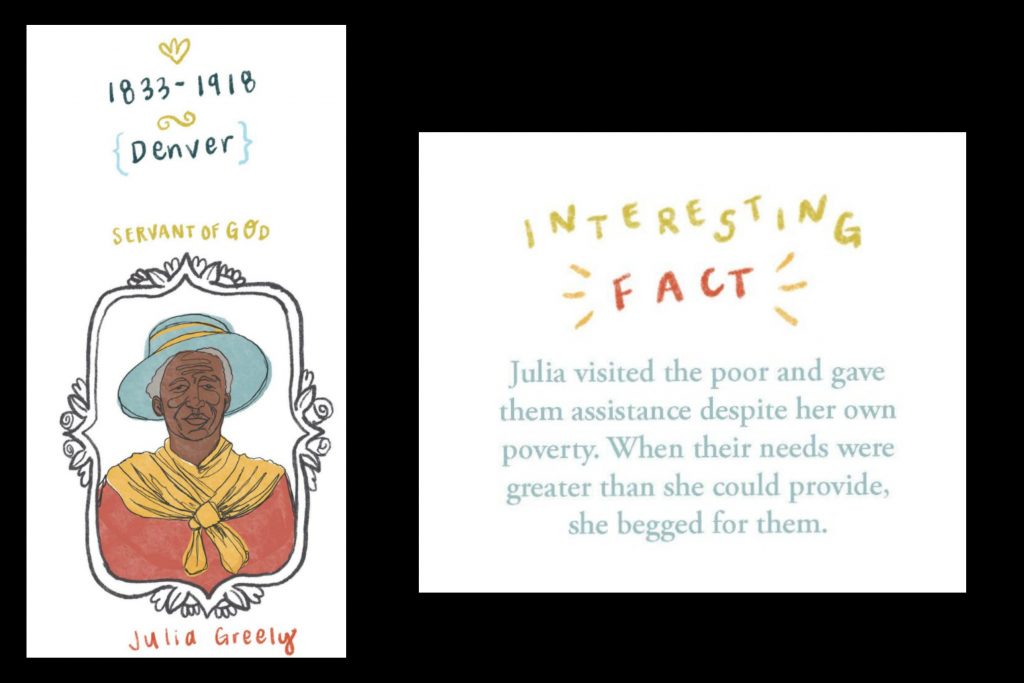 Julia was born into slavery in Missouri. When she was only 5-years-old, her eye was permanently injured by a slave master’s whip that he was using on her mother. She was freed under the Emancipation Proclamation in 1865. She took employment as a cook and nanny to Julia Pratte Dickerson of St. Louis. She moved with Julia and her husband, William, to Denver, CO.

Julia was baptized Catholic in 1880, and thereafter received the Eucharist daily. She was known for her devotion to the Most Sacred Heart of Jesus, the Blessed Virgin Mary and the Eucharist. Her faith was so strong that she walked the streets distributing information from the Sacred Heart League, all while quietly suffering from painful arthritis.

According to Julia’s obituary: “Every door in the parish was open to her. Her marvelous piety and her constant charity made her the friend of everybody. She was known in every convent of Denver, for, as might be expected, she loved Sisters.”

She was perhaps best known for her “little red wagon,” which she pulled through the streets of Denver at night, distributing food, coal and clothing to needy families. Julia did her charitable works under the cover of darkness so she wouldn’t embarrass those accepting charity from a poor, black woman.

In 1901, Greeley joined the Secular Franciscans. In recognition of her dedication to the poor, Greeley has been dubbed “Denver’s Angel of Charity.”