The sins of the founder have weighed heavily on the religious movement of Regnum Christi and the priestly order the Legionaries of Christ, but after much soul searching and an Apostolic Visitation by the Holy See, the movement can see the light at the end of the tunnel.

Though small in number, the Legionaries of Christ and Regnum Christi both maintain presences in the Archdiocese of Cincinnati. Five Legionaries of Christ priests live in West Chester, and a community of seven consecrated Regnum Christi women reside in Morrow. There are no consecrated men, and about 150 lay members of the movement throughout the archdiocese.

The Legionaries of Christ is a priestly religious congregation of pontifical right founded by Father Marcial Maciel, LC in 1941 in Mexico. The Legion is now present in more than 18 nations. Regnum Christi is an apostolic movement including laymen and women, deacons and even diocesan priests around the world. Regnum Christi is an apostolic movement including unconsecrated lay people and also consecrated lay men and women. These consecrated represent a new reality in the church that does not directly correspond to the traditional roles of sisters and brothers. The Legionaries and Regnum Chrisit share a charism and a history.

“We consider ourselves an entire spiritual family of Regnum Christi,” explained Father Daniel Brandenburg, LC. “Regnum Christi of course means Kingdom of Christ. In our spiritual family we have priests of the religious order of the Legionaries of Christ. We have here in Cincinnati a community of five priests. Also within the spiritual family of Regnum Christi we have consecrated men or consecrated women who consecrate their entire life to God to serve full time. They make simple vows of poverty, chastity and obedience just like the priests do, but they’re not religious. They are lay consecrated. They don’t wear a habit. They do live in community. It is kind of a novelty.”

Locally, the five Legionaries of Christ priests often help out at area parishes, in addition to their chaplaincy work at Royalmont Academy. They fill in for priests on vacation and help with parish penance services, including the recent archdiocese-wide The Light is ON For You confession event. Father Brandenburg added that the Legionaries and Regnum Christi have worked together locally to put on more than 150 retreats in the past year.

The local Legionaries of Christ have a house with permission from Archbishop Dennis M. Schurr but they are not an officially recognized community yet. They are in the second year of what Father Brandenburg called a three-year “getting to know” each other period. The consecrated Regnum Christi women, by contrast, are a recognized community.

Father Brandenburg said the waiting period has been a blessing.

“Because we’re here more stably, we’re helping out all the time in parishes in the area…,” he said. “We want to be part of the family and presbyterate of the archdiocese. We see that as a very important part of our charism. We’re not here to just do our own thing. We’re here to contribute to the mission of the Archdiocese of Cincinnati.”

Both the Legionaries and Regnum Christi owe their founding to the disgraced Father Maciel, who died in 2008 after being sentenced to a life of prayer and penance. Father Maciel was accused living a double life that included molesting seminarians and fathering children. Many of his sins were confirmed, leading to the Vatican visitation and reform of the order.

Cardinal Velasio De Paolis ended his tenure as papal delegate to the order in late February, declaring the Legionaries of Christ “reconciled with themselves, with their history, with the world and with the church.” Cardinal De Palois oversaw the reform of the order for four years.

“What our founder did was wrong,” Father Brandenburg said. “It is very clear that what the Holy See did as far as mandating a life of prayer and penance for him and helping the Legion as a whole, to separate the founder from the religious order, was acting with great prudence. It is a history that we mourn, we accept and we realize that it will in a sense stick with us for our entire history. The fact is our founder sexually abused children, seminarians, was unfaithful to his vow of celibacy, misused funds and had a drug addiction. These are really serious things and that’s a history we can’t change. And we can’t change the fact that this was the man that God used to start this religious order and the spiritual family of Regnum Christi.”

Once officially affiliated, one of the recent reforms to the groups was the separating of international governance of men and women Regnum Christi from the Legionaries of Christ. All groups claim to still have close working relationships. Part of the reforms following the scandal led to each group rewriting it’s own constitutions and norms.

“I think there’s more of a family spirit now that we’re a separate entity,” said Jamie Chmiel, section director for the local lay women’s Regnum Christi. “We’re all kind of working together in collaboration.”

Father Brandenburg acknowledged that the difficult period of the past few years led a few to leave their association with Regnum Christi, but said others fully aware of the scandal have still joined.

“During this whole process we’ve had Regnum Christi members who have left, who didn’t want to share in the association with the sins of the founder or felt that they couldn’t trust the Legion or Regnum Christi…,” he said. “We’ve also had people who joined during this time, fully cognizant of everything that’s gone on, with their eyes wide open. They see that despite the sins of the founder, they still see here a path to holiness.”

Margie Lademan, a consecrated woman and Spanish teacher at Royalmont said the Archdiocese of Cincinnati is a great home for the movement of Regnum Christi.

“It’s a good place for the Catholic church,” she said. “There’s such beautiful families and such openness to life and generosity. It is a very good place for Regnum Christi or any Catholic spirituality to flourish.

“We’re here to serve in any way we can,” Lademan added. “What we try to do is help families and youth in the Catholic Church to really discover the beauty of their faith and the treasure they have to share.” 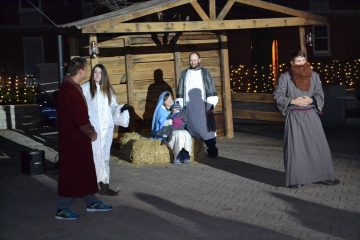