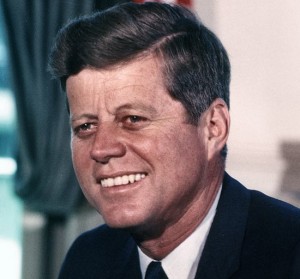 Like Americans everywhere, Catholics of the Cincinnati Archdiocese turned to prayer this week as they mourned the death of the late President John F. Kennedy.

Thousands attended special Requiem Masses offered in all the churches, and pastors noted a sharp increase in the number of persons receiving Holy Communion.
In a public statement on the day of the slain President’s death, Auxiliary Bishop Paul F. Leibold declared “Every citizen in the land shares in the deep grief experienced at this tragic loss. Our sincere sympathy goes out to the President’s wife and family. May God grant them strength to bear this great sorrow. “

“The Catholics of the Archdiocese of Cincinnati are immediately mindful of the words of Christ: “I am the resurrection and the life; he who believe in Me, even if he shall die, shall live, and whosoever lives and believes in Me, shall never die. Our belief in the Communion of Saints impels us to join in prayers for the repose of his soul.”

The Bishop requested that all churches in the archdiocese toll their bells, particularly at the time of the funeral on Monday, and to permit as many as possible to offer Mass for the departed President. He announced that each parish would be allowed to schedule an evening Mass on any day during the octave of Mr. Kennedy’s death.

A letter from the clergy from the chancery office further requested every priest to offer a Mass for the soul of the deceased.

Bishop Leibold offered a Solemn Pontifical Requiem Mass in the Cathedral of St. Peter in Chains Sunday and in Sacred Heart church, Dayton, Monday. The Cathedral mass, including the Bishop’s sermon was broadcast throughout the country by the American Broadcasting Company’s radio network.

At each of the Masses the Bishop read a cablegram from Archbishop Alter in Rome which described the report of the former President’s death as tragic news and declared that word were incapable of expressing his grief. The Archbishop asked for prayers for the late President, his family, and the country. 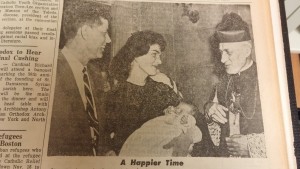 In his sermon at the Pontifical Masses, Bishop Leibold paid tribute to Mr. Kennedy’s qualities of mind and heart.

Following is an excerpt from the sermon:

“We have indeed a host of memories of an exceptionally distinguished career achieved by this great man dedicated to truth and justice, endowed by God with a mind of exceptional keenness and the heart of a giant and an administrative ability and drive that seemed superhuman.

“He had a great mind, eager to learn and facile in attaining the truth. His was a flexible mind that could be satisfied only by familiarity with many areas of learning. His was an analytical mind with an unusual ability to attack complicated problems and offer satisfactory and constructive solutions. His was a generous mind, ready to share his learning with others, as they also benefited by the extraordinary power of calm judgement and accurate reasoning. His was a fertile mind, always planning big things, projecting heroic ventures for the country he loved and for the world of people whom he recognized as his brothers, born of a common Father, God. His was a mind that despite its extraordinary endowments always retained a childlike faith before the omniscient God.”

“As Catholics we are proud of President Kennedy – no matter what our convictions about his policies and political actions – for as a sincere Catholic layman, he never hesitated at any time in his meteoric life, which took him to the highest office in the land and to the very peak of international acclaim, to profess and make clear to the world that he was a Catholic. It was unthinkable that the principles governing his moral, spiritual and religious life as a Catholic and those governing his life as a loyal citizen of the United States should ever create any conflict or interfere with the progress of either.”

“He proved in practice, in a matter clear to any unprejudiced, thinking man that his Catholicism made him an even better citizen of the country he loved – for what greater sign of love can any man show than to give his life for the nation he loves? Indeed his sacrifice should inspire us to ever greater heights as fellow Americans and fellow Catholics.”

Taking the time to wait for God

Did you know, Laurel Court by Gail Finke