Miracle is sign of mercy, says Brazilian who prayed to Mother Teresa

VATICAN CITY (CNS) — The inexplicable recovery from a severe brain infection — attributed to the intercession of Blessed Teresa of Kolkata — is a sign that God’s mercy is for everyone, said the Brazilian man who was healed.

“Merciful God looks over all of us, without distinction. Today it was me, perhaps tomorrow it will be someone else. I don’t feel special. Merciful God watches over everyone,” Marcilio Haddad Andrino told reporters at a Vatican news conference Sept. 2.

Andrino’s reported cure was the miracle that cleared the way for Mother Teresa’s canonization Sept. 4, which is the day before the 19th anniversary of her death.

Through a translator, Andrino told reporters that he started experiencing severe head pain, convulsions and fainting spells in 2006.

At first doctors did not know what was wrong, he said, but he, his fiancee — Fernanda Nascimento Rocha — their families and parish began praying for the intercession of Mother Teresa, Andrino said.

His condition worsened considerably in 2008, he said, and a new doctor finally diagnosed him with having several large abscesses on his brain. The infection and huge buildup of fluid was causing the convulsions, severe head pain and paralysis in his body, he said.

Rocha said she would place the relic on Andrino’s head where the abscesses were, recite the prayer of Mother Teresa’s beatification, and pray fervently to God, particularly the Our Father, stressing the words “Thy will be done.”

In December 2008, a few months after Andrino and Rocha married, he ended up in the hospital after experiencing excruciating head pain. He said he begged his wife to pray for him, and doctors decided to operate immediately.

Rocha said, “I asked Mother Teresa to heal Marcilio if this was God’s will. But if not, take his hand and have him return to the house of the Father without suffering.”

Andrino said he lost consciousness again and woke up in the operating room feeling a great sense of inner peace. Asking the doctors, “What’s going on?” he told them his head didn’t hurt anymore and that he felt fine. The medics then decided to delay the operation until the next day since the pain had subsided.

When the hospital staff ran tests, they found there was a 70 percent reduction in the amount of fluid pressing on his brain, he said.

The doctors did not operate, he said, and three days later more tests showed that all of the abscesses — the infection and fluid — had completely disappeared; not even scar tissue remained. He left the hospital just a few weeks later and, six months later, started work again “without any problems,” said Andrino, an engineer.

Doctors had told Andrino that because of all the medications and antibiotics he took over the years, the possibility that he and his new wife could conceive a child was very poor. However, he said, just one month later, Rocha was pregnant. And in 2012, their second child was born.

He said he saw the births of their two children as “an extension of that miracle” in 2008.

Rocha said their experience has led to a greater faith in God and their family has a very strong prayer life.

Canadian Father Brian Kolodiejchuk of the Missionaries of Charity said that even though the reported cure occurred in 2008, “I didn’t hear about it until 2013.”

Father Kolodiejchuk, who is postulator of Blessed Teresa’s sainthood cause, said the process for her beatification and canonization followed its typical course with no short cuts or special intervention by Pope Francis.

He said the only time Pope Francis ever met Mother Teresa was during a synod in Rome they both attended in 1994.

The pope observed her during the meeting, Father Kolodiejchuk said, and noted her “strength and fortitude.”

He repeated a comment Pope Francis had made to an Albanian priest during his 2014 visit to Tirana, saying the pope saw she was a woman who wasn’t intimidated by the bishops, was decisive and said what she wanted to say in her interventions.

As a way to underline her tenacity, the pope also joked “that he wouldn’t want to have had her as his superior,” Father Kolodiejchuk said. “Mother had the capacity to be both very firm and loving at the same time.”

Pope: Christians can't ignore suffering and have a clear conscience

Miracle is sign of mercy, says Brazilian who prayed to Mother Teresa 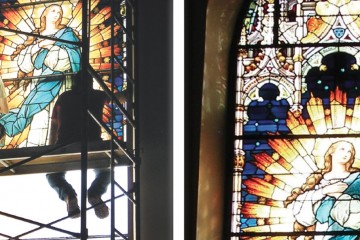