“Even though a person be the worst sort, if only he agrees to wear the medal, give it to him…and then pray for him, and at the proper moment strive to bring him closer to his Immaculate Mother, so that he have recourse to her in all difficulties and temptations,” Kolbe said of the Miraculous Medal.

“This is truly our heavenly weapon,” the saint said, describing the medal as “a bullet with which a faithful soldier hits the enemy, i.e. evil, and thus rescues souls.”

The Miraculous Medal is a sacramental inspired by the Marian apparition to St. Catherine Laboure in Paris in 1830. The Virgin Mary appeared to Laboure as the Immaculate Conception standing on a globe with light streaming from her hands and crushing a serpent under her foot.

“A voice said to me, ‘Have a medal struck after this model. All who wear it will receive great graces, especially if they wear it around the neck’,” Laboure said.

As a Franciscan seminarian studying in Rome in 1917, Kolbe was moved by the story of the role the Miraculous Medal played in the conversion of Alphonse Ratisbonne.

Ratisbonne was a French Freemason and an atheist of Jewish descent, who received the grace of conversion while wearing a Miraculous Medal given to him by one of his Catholic friends in Rome. The Virgin Mary appeared to Ratisbonne Jan. 20, 1842 in a side chapel in the Church of Sant’Andrea delle Fratte in Rome.

St. Maximilian Kolbe chose to celebrate his first Mass April 29, 1918 in the side chapel in Sant’Andrea delle Fratte, where the Virgin Mary appeared to Ratisbonne.

Ratisbonne went on to be ordained a Jesuit priest, and eventually left the order to move to Jerusalem in 1855 to found a convent for sisters in the Congregation of Our Lady of Sion, a congregation founded to “to witness in the Church and in the world that God continues to be faithful in his love for the Jewish people.”

Kolbe went on to give his life in place of a fellow prisoner in Auschwitz, a man who had a wife and children. He died of a carbolic acid injection in the concentration camp Aug. 14, 1941. The Nazi officials cremated Kolbe’s body on the feast of the Assumption of Mary.

Kolbe is known for being an effective evangelist and missionary. Before moving to Japan in 1930, Kolbe made a pilgrimage to the Chapel of the Miraculous Medal on Rue de Bac in Paris. 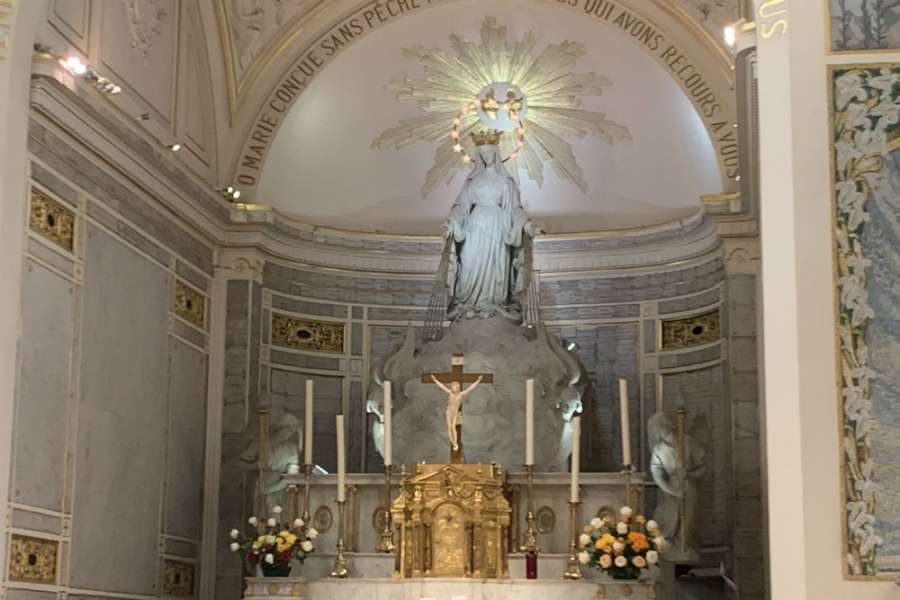 The Chapel of Our Lady of the Miraculous Medal in Paris. Credit: Courtney Mares/CNA.

St. Pope John Paul II remembered Kolbe’s visit when he prayed in the Paris chapel in 1980:

“I come as a pilgrim, after all those who came to this chapel in 150 years, like all Christians who flock here every day to express their joy, their trust and their supplications. I come as Blessed Maximilian Kolbe: before his missionary journey to Japan, just 50 years ago, he came here to seek your support to propagate what he later called ‘the Militia of the Immaculate’ and undertake his prodigious work of spiritual renewal under your patronage, before giving his life for his brothers,” John Paul II said.

Kolbe formed the Militia Immaculata in 1917 to “lead every individual with Mary to the most Sacred Heart of Jesus.” He asked all Militia Immaculata members to wear the Miraculous Medal as a sign of their total consecration to Mary.

“Now in this epoch of the Immaculate Conception the most Blessed Virgin has given mankind the ‘Miraculous Medal’. Its heavenly origin has been proven by countless miracles of healing and particularly of conversion,” Kolbe wrote.

“The Immaculata herself in revealing it promised all who would wear it very many graces; and since conversion and sanctification are divine graces from God, the Miraculous Medal will be one of the best means for attaining these gifts,” he said.

Kolbe also added to St. Catherine’s prayer associated with the sacramental: “O Mary, conceived without sin, pray for us who have recourse to you.” To this, Kolbe added, “and for all who do not have recourse to you, especially the enemies of the Church and those recommended to you. Amen.”