New society to benefit Cathedral of St. Peter in Chains

CATHEDRAL DEANERY — A newly formed group is working to ensure the aging Cathedral of St. Peter in Chains, the focal point of the Cincinnati archdiocese, remains vibrant for future generations.

The Archbishop Karl J. Alter Society is comprised of members who donate $1,000 or more to the cathedral. Formed in late 2009, the society has nearly 80 members after a kick-off earlier this year. The Alter Society is part of the new Friends of the Cathedral organization, which consists of those who donate $25 or more.

The funds will be used to update and preserve the historic structure, which was extensively renovated and expanded in the late 1950s under the direction of then-Archbishop Karl J. Alter. The building was originally dedicated in 1845.

“It’s the living room of the archdiocese,” said Deacon David Klingshirn, who is assigned to the cathedral and is the Alter Society’s unpaid director. “It sets the standard for the archdiocese.”

The society was formed after years of discussion about updating the cathedral’s undercroft to make it more functional and attractive. A goal is to eventually create smaller areas for meetings and other events in the space, update the restrooms and make the entrance more efficient, said Father James Bramlage, pastor of the cathedral.

Other possible projects include updated lighting, a computerized mechanism to ring the cathedral’s bells, an updated sound system, a new organ, refinishing the pews and landscaping, Deacon Klingshirn said. A steering committee will evaluate projects.

The cathedral serves as the place for special celebrations such as the Rite of Election, ordinations and anniversary Masses.

Retired Archbishop of Cincinnati Daniel E. Pilarczyk celebrated the 50th anniversary of his ordination to the priesthood at the cathedral in one of his last public Masses as archbishop.

“Those kinds of events and celebrations have to have a home,” Father Bramlage said. “Every diocese has to have a cathedral, because it is the mother church of the diocese.”

The building is also a Cincinnati landmark and a symbol of the archdiocese for the city. Public funerals of firefighters and police officers killed in the line of duty have often been held there. In addition the cathedral is the site of 20 Masses a week, weekly eucharistic adoration and confession six days a week.

The cathedral has had a storied history since its original dedication as a stunning example of Grecian architecture. In the 1930s, however, the neighborhood around the cathedral had deteriorated and the building itself was in decay. From 1938-1957 St. Monica Church in Clifton served as the cathedral for the archdiocese.

Deacon Klingshirn remembers Archbishop Alter’s fundraising efforts to renovate, expand and rededicate St. Peter in Chains in the 1950s. Families across the archdiocese, including Deacon Klingshirn’s, contributed to the drive.

“My parents took great pride in this effort by Archbishop Alter to relocate the cathedral downtown,” Deacon Klingshirn said. “It needs to be preserved. We are caretakers of what our parents and grandparents handed down to us. It’s our heritage.”

For more information on the Alter Society or Friends of the Cathedral, contact Deacon Klingshirn at 513-421-5354 or [email protected].

New society to benefit Cathedral of St. Peter in Chains 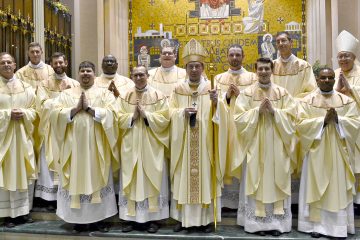