WASHINGTON — The increase of restrictions on religion are up worldwide — and, for the first time, those restrictions increased markedly in the United States, according to a new Pew report.

For the United States, it was the first time in the study’s four-year history that both government restrictions and social hostility were up by at least one point on a scale of 0 to 10, according to the Pew Forum on Religion & Public Life, which issued the study Sept. 20. The United States was one of 16 countries with such large measurable increases in both criteria.

The increases pushed the United States from a ranking of “low” to “moderate” in terms of restrictions on religion, according to the study, “Rising Tide of Restrictions on Religion.”

In terms of government restrictions, the Pew study found 51 cases of governments applying zoning laws or regulations to prevent religious groups from building houses of worship, schools or other facilities. Of those 51 instances, 31 involved Christian denominations.

Oklahoma voters approved a change to the state constitution restricting the use of Islamic law, or sharia, in the state in November 2009, but a federal appeals court struck down the measure last January. The federal Justice Department had to intervene on behalf of a Sikh prisoner in California who was under threat of having his facial hair cut off. A United Nations special rapporteur recounted the case of a New York prisoner who was forbidden to convert to Islam.

High-profile incidents dominated the social hostilities category, including the November 2009 shooting spree by Army Maj. Nidal Hasan that killed 13 people and wounded 32 others at Fort Hood, Texas; the “underwear bomber,” Umar Farouk Abdulmutallab, who tried set off a bomb while aboard a Detroit-bound flight in December 2009; and the May 2010 bombing attempt in New York’s Times Square by Faisal Shahzad, a Pakistani-born resident of Bridgeport, Conn.

Also, residents near Murfreesboro, Tenn., tried to block construction of a mosque; although the mosque opened in August, a federal court challenge remains.

Employment discrimination complaints to the federal Equal Employment Opportunity Commission rose more than 10 percent, from 3,386 to 3,790, but the number the EEOC determined had “reasonable cause” to suggest religious discrimination more than doubled, from 136 to 314.

On the world scene, Christians — as with each of the past years of the study — were more frequently the target of religious restrictions.

On a 10-point “social hostilities index,” 15 countries registered scores of 7.2 or higher. Pakistan registered the highest score, followed by India, Iraq, Sri Lanka, Bangladesh, Somalia and Israel — all of whom were on the list in the first year of the study.

The report noted that as of mid-2010 — six months before the outbreak of protests and other civil unrest that would become known as the Arab Spring — the Middle East and North Africa had “by far the world’s highest levels of social hostilities involving religion as well as government restrictions on religious beliefs and practices.”

In all, 37 percent of countries have high or very high restrictions on religion, compared with 28 which were found to have moderate restrictions, and 35 percent with low restrictions. 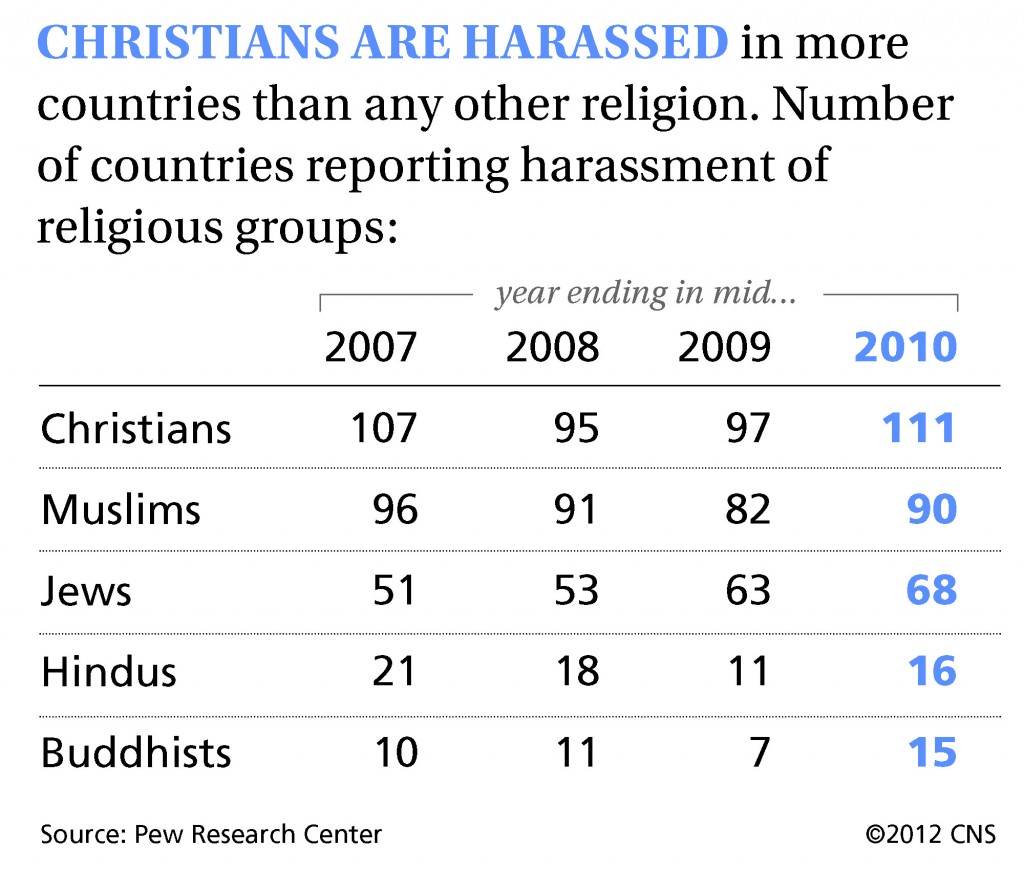 Cardinal: People need each other to be reminded of God's presence, hope

The Catholic Moment: The clunker and conscience