Cardinal: People need each other to be reminded of God’s presence, hope

CHICAGO — The Scripture readings at a Chicago Mass celebrated to mark the 10th anniversary of the U.S. bishops’ “Charter for the Protection of Children and Young People” offered the despair and isolation felt by an exile in the Book of Lamentations and the comfort of God’s mercy in the beatitudes.

Their juxtaposition shows the balance we all need, Cardinal Francis E. George of Chicago said in his homily at a “Mass of Atonement and Hope” celebrated Sept. 15 at Holy Family Church, site of the archdiocese’s Healing Garden.

The garden, dedicated in June 2011, offers healing and reconciliation to all hurt by clergy sex abuse.

The concelebrants of the Mass were the cardinal and five priests who are involved with the Chicago Archdiocese’s response to clerical sexual abuse. It included prayers for victims and their families, for those who assist them and for the forgiveness of perpetrators. It ended with a blessing of facilitators of the Virtus program, which trains church workers about the signs of sex abuse, how to recognize adults who are trying to take advantage of children and how to thwart opportunities for abuse.

More than 200,000 children also have received safe environment training to help them recognize when something is wrong before abuse happens.

Cardinal George focused his homily on the need for both balance and integrity in every human life. Lamentations, he said, expresses the isolation of an individual who is completely at odds with himself and his own self-understanding. The beatitudes offered in the Gospel of St. Matthew express the mercy and love God shares with the community of believers.

“This stark contrast in the words of holy Scripture reflects the experience of people in their journey of life which takes them and us through good times and bad,” Cardinal George said. “The expression of who they are is a combination of lamentations and beatitudes, of isolation and of life with God.

“In our own experience, life with God and with one another is always a balance. In good times, we recall the bad times in order to make realistic plans and avoid a sense of hubris, and in the bad times, we need the help of others to recall the good times to prevent despair, to prevent being caught in a trap, in a box. We need one another to remind us that God is with us and therefore there is hope.”

Victims of clerical sexual abuse, often years or decades after the abuse occurred, often talk as though they have put that experience in a box and closed it off from the rest of their lives, the cardinal said. But they must open that box to live fully integrated lives, and to stop the abuse from causing further damage, he said.

Priests who have abused children or young people also put that part of their lives in a box, Cardinal George continued, and it seems to have little to do with the rest of their life, which often includes many good and generous acts.

But without opening that box and acknowledging what they’ve done, they cannot overcome it, he added.

The cardinal said he has often asked perpetrators to offer a real apology to their victims, going beyond “I regret what happened” to a clear statement of “I’m truly sorry for what I did to you.”

“Again and again,” Cardinal George said, “they can’t quite bring themselves to do that.”

The cardinal went on to say that the way the U.S. Catholic Church has dealt with the sexual abuse of children by clergy since the implementation of the charter in 2002 was like opening that box.

“The box is open now, and it must remain open,” he said.

Only in that way can the church protect children and help promote healing for those who were hurt.

The cardinal spoke of the work done by the Chicago archdiocesan Victim Assistance Ministry, and the creation of the Healing Garden, a project undertaken by victims of clerical sexual abuse.

“It is here as a permanent apology,” the cardinal said, and “a place where balance can be achieved.”

St. Louis to host day of prayer to implore Mary's blessing upon nation

Cardinal: People need each other to be reminded of God’s presence, hope

May 20: St. Bernardine of Siena 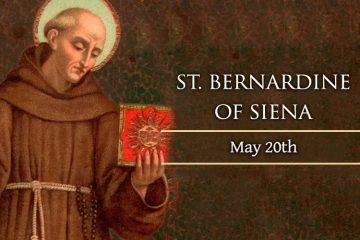