No easy answers to pastoral questions on assisted suicides

BALTIMORE (CNS) — As Canada prepares for the legalization of assisted suicide throughout the country in June and nearly half of the U.S. states take up some kind of legislative proposal on the topic this year, questions arise about its pastoral implications.

What should a hospital chaplain do if confronted with a patient who expresses a determination to use assisted suicide? Can anointing of the sick be given to such a patient? How do pastors decide whether a person who carried out an assisted suicide should receive a Catholic funeral?

Experts in Catholic health care and ethics seem to have reached agreement on the answer to those questions: It depends.

“At this point in time, you really can’t give an answer,” said Sister Carol Keehan, a Daughter of Charity who headed hospitals in Florida and the District of Columbia before becoming president and CEO of the Catholic Health Association in 2005.

“If someone confessed or told a priest about their individual situation, their individual culpability about the decision remains between the person and God, and the priest cannot talk about it,” she added. “I don’t think we ought to ever decide what should happen in the internal forum between the mercy of God and a priest working with someone.”

Marie T. Hilliard, director of bioethics and public policy at the National Catholic Bioethics Center in Philadelphia, also said the question is not a matter of ethics but of “the governance of the church in terms of access to sacraments.”

“The denial of absolution is not at all our call at the NCBC, nor the call of any one ethicist, but the judgment of the confessor at the time, considering the intention of the penitent to reform,” she said.

Assisted suicide is currently legal in Oregon, Vermont, Montana and Washington state. A California law allowing assisted suicide takes effect June 9 and a Canadian court order permits it throughout the country beginning June 6. An effort to bring the California law before the voters failed to gain the 365,880 signatures needed to place the issue on the November 2016 ballot.

In Canada, Archbishop Terrence Prendergast of Ottawa, Ontario, did not specifically address the pastoral implications of assisted suicide in a letter read at all Masses in the archdiocese March 5-6. But he said, “From not only a Catholic perspective but any rational perspective, the intentional, willful act of killing oneself or another human being is clearly morally wrong.”

He quoted the Catechism of the Catholic Church, which says, “Whatever its motives and means, direct euthanasia consists in putting an end to the lives of handicapped, sick or dying persons. It is morally unacceptable.”

“To formally cooperate in the killing of the disabled, frail, sick or suffering, even if motivated by a misplaced compassion, requires a prior judgment that such lives do not have value and are not worth living,” the archbishop added. “But all human life has value.”

In an interview with Canadian Catholic News, Archbishop Prendergast said those who choose to participate in assisted suicide do not have “the proper disposition for the anointing of the sick.”

“The rite is for people who are gravely ill or labor under the burden of years, and it contains the forgiveness of sins as part of the rite,” he added. “But we cannot be forgiven pre-emptively for something we are going to do, like ask for assisted suicide when suicide is a grave sin.”

The Code of Canon Law says anointing of the sick “is not to be conferred upon those who persevere obstinately in manifest grave sin.” But the 1983 code now in effect dropped a norm from the 1917 code that had denied a Catholic funeral to those “who killed themselves by deliberate counsel.”

At least one canon lawyer thinks the practice of denying a Catholic funeral should be revived in two specific cases — to the murderer in murder/suicides and to “suicides committed in accord with civil euthanasia laws.”

In a March 29 email to Catholic News Service, Edward Peters, who holds the Edmund Cardinal Szoka chair at Sacred Heart Major Seminary in Detroit, affirmed the views about assisted suicide he outlined in a 2013 posting on his blog, “In Light of the Law: A Canon Lawyer’s Blog.”

“A key point of these (civil assisted suicide) laws is to rule out suicide motivated by depression, mistaken prognosis, third-party pressures and so on,” he wrote. “In other words, the observance of these laws eliminates the very factors upon which ministers can base their doubts about one’s personal culpability for self-slaughter and grant the church’s funeral rites to those killing themselves.”

Peters was commenting specifically in that blog post on the case of 45-year-old deaf twins Marc and Eddy Verbessem, who requested lethal injection in Belgium after learning that they would go blind at some point in the future. Belgium’s assisted suicide law does not require that a patient be terminally ill before making such a request but only that he or she be suffering “unbearable pain.” The twins’ brother Dirk told news media that the thought of being dependent on others was unbearable to them.

By committing suicide together, “I think they plainly and publicly committed a gravely sinful act, left a horrid example to others facing these or similar physical challenges and contributed mightily to society’s growing assumption that the disabled are better off killing themselves,” Peters wrote.

Both Archbishop Prendergast and Sister Carol stressed in their comments that hospital and church personnel must help Catholics understand church teaching on end-of-life decisions and the fact that there is no obligation to undergo what the CHA president called “massive amounts of intrusive but futile care.”

“We see that as our responsibility. We are finding over and over again that there are misunderstandings about dying and that the church’s teaching gets misrepresented and misunderstood,” she said. “People need and deserve an understanding that whether they are fully in control of their thought processes and their faculties, their wishes and autonomy are going to be respected. Dying patients have a right to make those choices” or designate someone to make those decisions for them.

Archbishop Prendergast said in his letter that the church “does not advocate prolonging life at any cost. Rather, the church is guided by the principle of the quality of life that considers the whole person and not simply keeping the body going no matter what.”

“As rational Catholic Christians,” he wrote, “we ask the question in evaluating whether or not to accept life-prolonging treatment: Is there a reasonable hope of benefit without excessive pain, expense or other serious problem?”

Homily: 'God was full of surprises when it came to Mother Angelica'

No easy answers to pastoral questions on assisted suicides 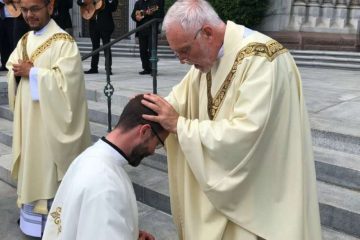