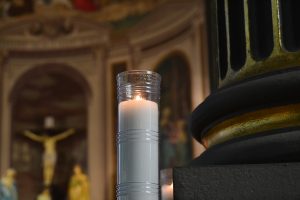 A Mass of Christian Burial for Divine Word Brother Xavier Eshman was celebrated June 28 in the chapel at his community’s residence in Techny, IL. Brother Xavier, 79, died June 18.
A native of Dayton, Brother Xavier entered formation with the Divine Word Missionaries after graduating from Ohio State University in 1959. He taught science and math at the Divine Word Brother Candidate School and worked on a dairy farm on the Techny property. He professed vows in 1962, and in 1968, became the first brother on the faculty of Divine Word Seminary.
Brother Xavier went on to spend 40 years as a missionary in Argentina and Paraguay, where he taught future generations how to more productively grow crops and raise livestock
He returned to the United States in 2010.
Brother Xavier is survived by his sisters, Mary Ellen Francis, Jane Keever, Suzanne Frangesch and Cynthia Eshman. Interment was in St. Mary Cemetery in Techny.

A Mass of Christian Burial for Sister of Charity of Cincinnati Agnes Ann Gardt was celebrated July 21 in the motherhouse chapel. Sister Agnes Ann, 89, died July 16 at Mother Margaret Hall. She was a Sister of Charity of Cincinnati for 68 years.
A native of Minneapolis, she earned a bachelor’s degree in education from the then College of Mount St. Joseph in 1951, and later did additional academic work in pastoral services. Sister Agnes Ann’s ministry included 20 years as a primary teacher in Michigan. She went on to teach at schools in Colorado, Michigan and Illinois. In the Archdiocese of Cincinnati, she taught at St. Anthony. Sister Agnes Ann later worked in pastoral ministry with seniors and at various parishes. She also spent three years as a missionary in St. Lucia and Dominica. She remained active in retirement as a parish and hospital volunteer and at the motherhouse.
Interment was in the Sisters of Charity cemetery.

A Mass of Christian Burial for Sister of Charity of Cincinnati Grace Schwietering was celebrated Aug. 9 in the motherhouse chapel. Sister Grace, 91, died Aug. 2 at Mother Margaret Hall. She was a Sister of Charity of Cincinnati for 73 years.
A Cincinnati native, Sister Grace earned a bachelor’s degree in English from the then College of Mount St. Joseph and a master’s degree in administration from the University of Detroit. Her ministries were all centered around elementary education, teaching junior high students for 14 years, followed by 33 years as a principal. She began teaching in 1946 at St. Mary, Marion, Ohio. In the Archdiocese of Cincinnati, she also taught at St. William in Cincinnati and Corpus Christi in Dayton. She later spent 25 years in educational ministry in inner-city Detroit.
Sister Grace is survived by her sister, Mary Capannari. Interment was in the Sisters of Charity cemetery.

A Mass of Christian Burial was celebrated for Ursuline (Cincinnati) Sister Mary Germaine Thorburn Aug. 19 at St. Ursula Convent Chapel. Sister, Germaine, 77, died Aug. 17, the 57th anniversary of her religious profession.
A Cincinnati native, she graduated from Our Lady of Cincinnati College with degrees in math and Latin. She went to earn an MTS degree in mathematics from Catholic University of America and a master’s degree in theology from Fordham University.
Sister Germaine was known in the United States and Canada as a pioneer in the study of St. Angela Merici’s (foundress of the Ursulines) spirituality, especially as a staff member of the inter-Ursuline Angela Institute. Through the years, Sister Mary Germaine taught mathematics and religion at St. Ursula Academy, and mathematics at McNicholas High School. She also taught at Ursuline Academy in Springfield, IL. In addition, she was a GED teacher for welfare recipients at the Terrace Guild in Winton Terrace, and spent eight years at the Hamilton County Justice Center, where she was a deputy sheriff and helped inmates prepare for their GED. She was also a teacher in the archdiocese’s Permanent Diaconate Program, served as spiritual director for the Cursillo movement and seminarians and taught a course in spirituality at the Athenaeum of Ohio. Her last years were spent at Mercy Franciscan West Park, where she served several terms as Resident Council President.
Interment was at Gate of Heaven Cemetery in Montgomery

'Hear the cry of the earth,' pope and patriarch urge in ecology message